If you’ve spent time in downtown Seattle during the holiday season, then you many recognize Richard Clarke, who has become a Salvation Army staple in front of Nordstrom. 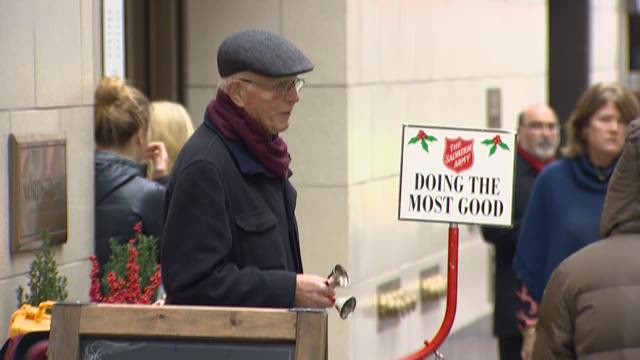 If you’ve spent time in downtown Seattle during the holiday season, then you many recognize Richard Clarke, who has become a Salvation Army staple in front of Nordstrom.

“I'm working on my 16th year now at Nordstorm, 17th year overall, and I look forward to it,” Clarke said. “I look forward to Thanksgiving because it means the next day I can down and start ringing.”

It’s something Clarke does selflessly and skillfully, rain or shine. The Salvation estimates he’s raised more than $100,000 in his many years of volunteer service. What he received in return -- Clarke calls priceless.

"I probably get more out of it than I put into it, because I get hugs, I get kisses, I get lots of thank yous. It's just one of those happy times for me,” said Clarke. “It's kind of quid pro quo, because I'm getting, and hopefully I'm doing for Salvation Army, and hopefully I can continue, because people expect me here now." 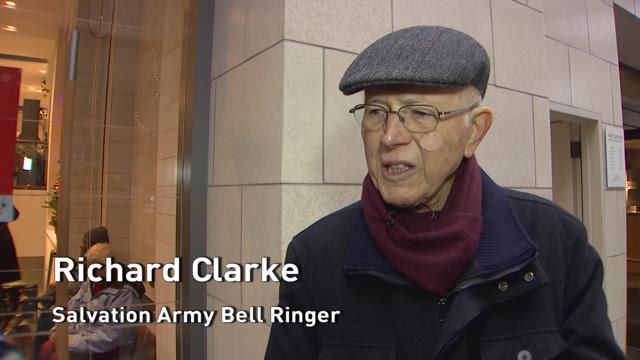 People including Marsha Mutisi who works in downtown Seattle and notices Clarke day in day out, during December.

“On those cold days, it was freezing, and he was here,” described Mutisi. “I'm so thankful and so blessed to know him. He touched my heart.”

“I look at this as a chance to look people in the eye and say 'help others who are less fortunate than you,'” Clarke said.

“We’ve had lots of family that come daily to our food banks, to receive extra assistance trying to make ends meet. I wasn't aware that there were so many families even living out of their vehicles," said Barnes.

“In fact, there’s been an increase in phone calls, just over the past two months, for assistance of various kinds -- rental assistance, assistance with their gas and electric -- so it lets us know we need to continue to increase the services that we’re giving across the county," Barnes continued.

However, Barnes said giving has been slightly down this year. The Salvation Army is hoping to make up the difference in the bell ringers' final push through Christmas Eve.

“As I watch people enjoying the holiday season as they're buying for family and friends, I would hope that each of them is thinking about what percentage of my income am I also giving to someone whom I will never see,” said Clarke.