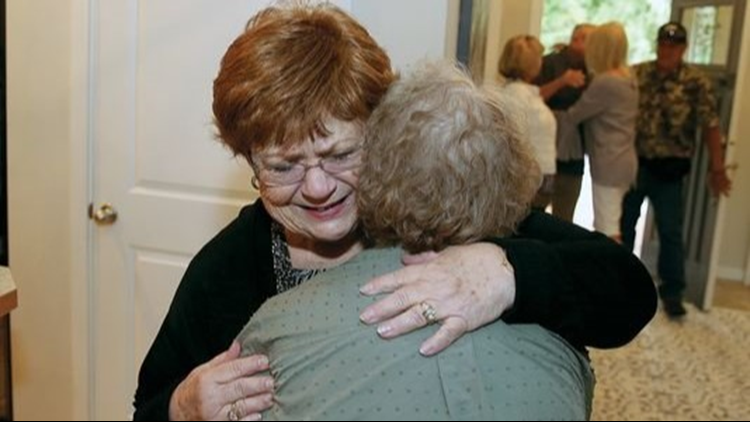 Joyce Risher, 83, stood in the entryway of her daughter's house anxiously waiting to greet the visitors coming to the door.

"I've got butterflies in my stomach, and they're about to fly out," she said before she stood up.

Tears welled up in her eyes as Beverly Meier, 78, walked through the door.

"Hurry up, hurry up," Risher said laughing as she prepared for a hug.

Meier and Risher share a love of Diet Coke, a craving for cream cheese bagels at breakfast and a habit of bringing chips and dip to parties. They share the same parents, too, but didn't know that, or each other, until an Ancestry.com DNA test six months ago.

Meier flew into Seattle from Sacramento on Thursday so the long-lost sisters could meet in person for the first time.

"It's been a long time, huh," Meier said to Risher during their hug.

Risher's granddaughter, Melissa Berry, became interested in researching her family genealogy on Ancestry.com last summer. She said she never planned to submit her DNA to the site until it went on sale over Black Friday.

"I did that not really expecting a whole lot from it," Berry said. "And then when we got the match results back, I matched with this woman named Beverly (Meier) that I didn't know... She had her dad listed as Raleigh (Anderson), which is my grandmother's dad."

Meier grew up an only child in Sacramento but always knew she was adopted at birth and had siblings somewhere in Washington.

"As far as I understand, my adoptive parents lived next door to the Andersons (her birth parents)," Meier said.

It was a lifelong dream to find her siblings, she said, and she visited the state a couple times over the past 30 years to search for them.

"I went to Oso, which was the town I was born in, and looked for them, but nobody had heard of the Andersons," Meier said.

Meier submitted her DNA to Ancestry.com about a year ago, only wanting to know about where her ancestors came from. She figured the siblings she'd been searching for had already died at that point.

Risher spent the last few years believing her brother, Al Anderson, 74, was her last living sibling. The birth of a younger sister, Meier, in 1940 was never revealed to her or her seven other siblings.

After Risher's birth in Pasco, the family moved around quite a bit before settling down in Bremerton. She stayed her whole life, graduating from Central Kitsap High School in 1954 and working at the Puget Sound Naval Shipyard for 40 years.

So when Meier went looking in Oso, there was nothing to find.

"I always wondered why they (her older siblings) didn't look for me," Meier said. "... But they didn't even know."

Risher's granddaughter, Berry, never heard from Meier on Ancestry.com, so she searched for her on Facebook in hopes of connecting there.

"Just off of her profile picture, we were like, 'Oh my gosh, she looks identical, like so close to my grandma,' " Berry said.

After messaging back and forth, the families confirmed the relation.

When Meier got Berry's message, she said she had to make sure they were serious and it wasn't a prank.

"It's a dream come true because you think about it your whole life and you don't have those family roots, and now I have roots," Meier said.

On Saturday, the family held a reunion in Silverdale with more relatives ready to meet Meier.

"It was meant to be, that's for sure," Meier said.