Tuesday night will mark the first of three community meetings where people can learn more about the plans and give feedback. 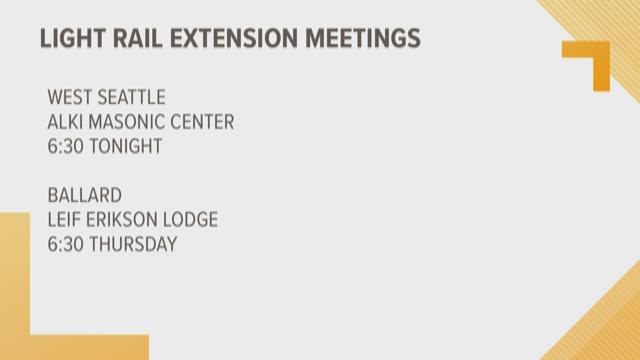 Sound Transit is hoping to get community reaction to their plans for West Seattle and Ballard light rail extensions.

Tuesday night will mark the first of three community meetings where people can learn more about the plans and give feedback.

West Seattle’s light rail extension will be 4.7 miles of new service from downtown Seattle to the Alaska Junction neighborhood. There will be five light rail stations on the new West Seattle route that is scheduled to open for riders in 2030.

As for Ballard, the plan is for the extension to open in 2035. There will be nine stations on five miles of light rail service that would be built out beginning in the International District and heading all the way to Market Street in Ballard.

Here’s the schedule for the open houses where you can learn more information:

Members of the public unable to attend the open houses can comment online by clicking this link.