A lawsuit alleges that USC Events refused to account for $2 million meant for artists and vendors at Paradiso Festival.

Between Thursday and Sunday, 40 to 50 patients who had been at Gorge Amphitheatre's Paradiso Festival were hospitalized for problems related to drugs and alcohol. One patient died of drug-related causes.
Author: Tony Black
Published: 9:15 PM PST January 31, 2020

Promotion company, Insomniac Holdings, is asking for a jury to confirm that USC Events is no longer legally able to use the Paradiso Festival branding and anything associated with it.

USC Events helps promotes multiple concerts throughout Washington state and Paradiso Festival is one of the more well-known events that happens every summer at the Gorge.

The lawsuit alleges that USC Events and its owner Chad Anderson repeatedly refused to provide documentation to account for more than $2 million dollars that Insomniac Holding had given to USC Events to pay for artists and vendors who performed at Paradiso Festival at the Gorge in George, Washington in June 2019.

The suit also alleges that after multiple attempts to settle the 2019 event, Insomniac notified USC Events they were in breach of contract and gave them until January 18, 2020 to cure it. Insomniac said that did not happen and thus they terminated their agreement with USC Events.

YourEDM, a publication focused on electronic dance music, reports the following: "Perhaps more interesting... is the admission in the suit that Insomniac wants to throw a show this summer at the Gorge without USC."

On the Paradiso Festival website, there are no mentions of anything related to the 2020 festival. The site still features information on the 2019 festival.

In a statement to KING 5, Chad Anderson, the owner and CEO of USC Events, said they were planning a legal response:

"USC Events finds these recent allegations disheartening and disagrees with this lawsuit. We are disappointed that Insomniac would decide to strain our long-tenured relationship with this litigation, over an event that USC has created from inception. To our community, thank you for your continued support as we work through this. Due to the legal nature of the situation, we are unable to comment further at this time. We will be filing a legal response." 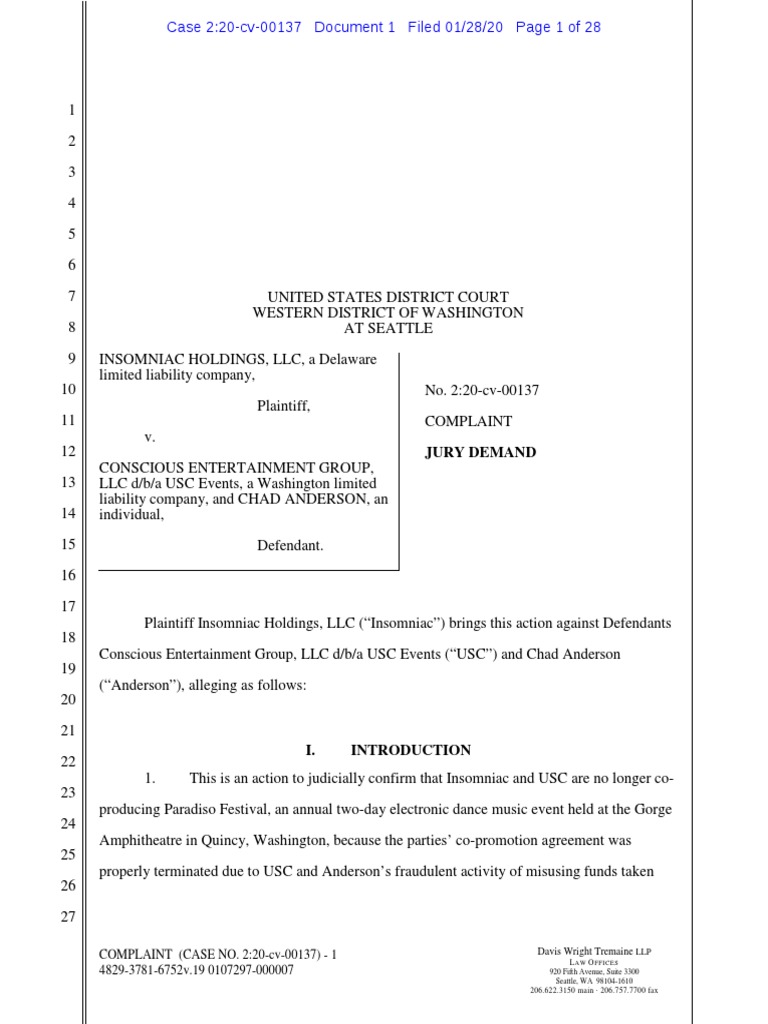