Flames engulfed an apartment building under construction near the Everett Marina on West Marine View Drive. A home and emergency vehicles were also damaged. 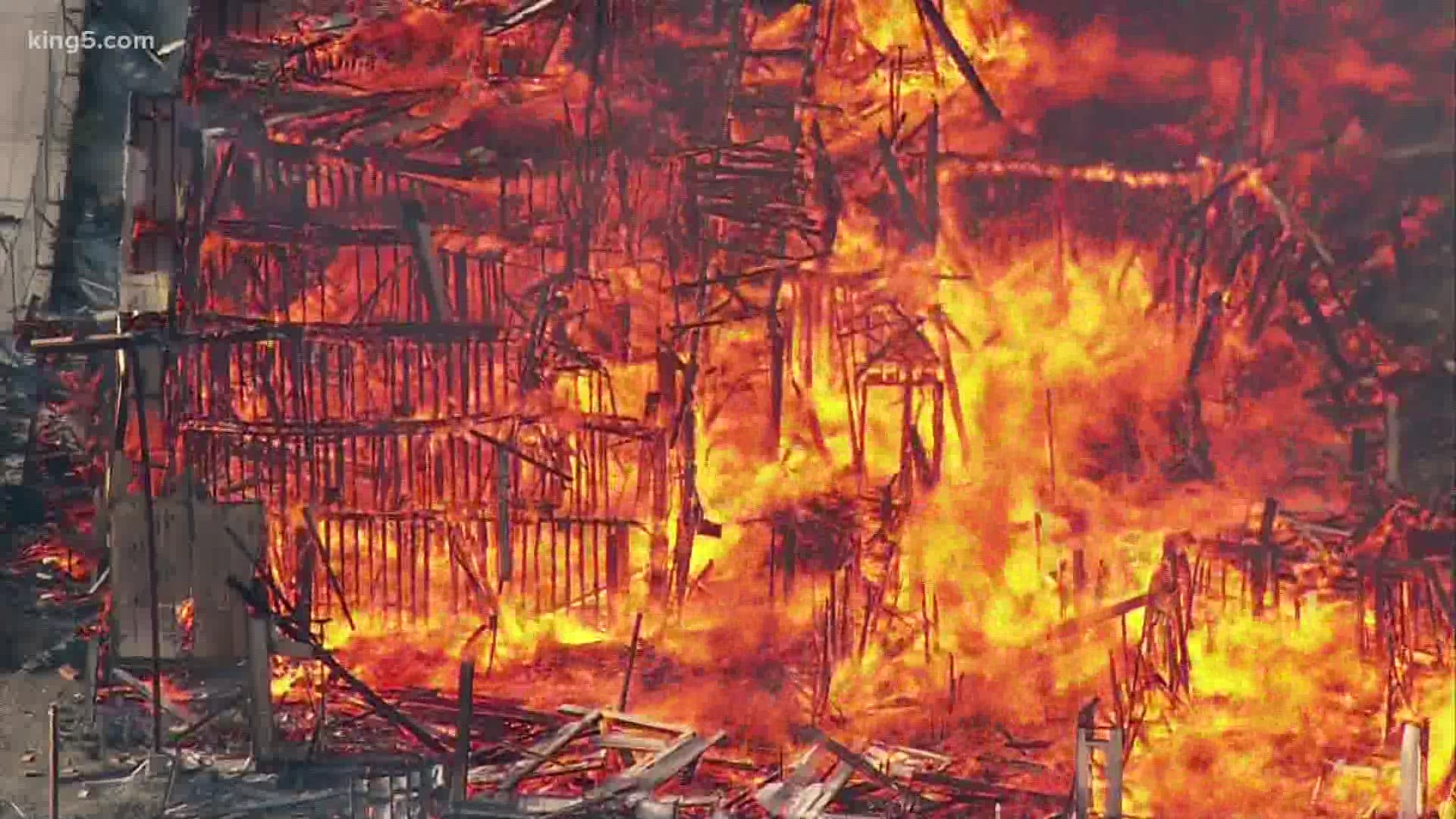 A large fire destroyed an unfinished apartment building near the Everett Marina Thursday evening, causing at least $25 million to $30 million in damages.

The Everett Fire Department said the 4-alarm fire broke out around 5:45 p.m. at the Waterfront Place Apartments, located at 1300 West Marine View Drive.

Firefighters established a defensive attack on the fully-involved fire at the large apartment building under construction.

The Everett Fire Department said two buildings, a north and south, were under construction at the Waterfront Place Apartments.

The south building “burned completely to the ground,” the department said. The heat from the fire caused some damage to the north building and the windows were also broken.

Gusty winds spread the embers, forcing neighbors to use garden hoses to put out flames and hot spots in their yards. Embers also spread east to Grand Avenue Bluff, which caused a brush fire.

The heat also damaged two emergency vehicles. The fire department said the radiant heat blew out the windows of a ladder truck and melted components on an aid unit.

The fire caused at least $25 million to $30 million in damage, the Everett Fire Department tweeted Friday afternoon. The department said the damage estimate was “very conservative,” adding the amount “does not take into account any damage to other property on W Marine View Dr. or the general area of 1400-1700 blocks of Grand Ave & Rucker Ave and any other surrounding areas affected.”

One firefighter suffered minor burns to his hand while moving the aid car to prevent more damage. No other injuries have been reported. The injured firefighter was transported to Providence Regional Medical Center for treatment, the fire department said. The firefighter was released from the hospital Thursday night.

“This 4-alarm fire exhausted all available resources within Snohomish County to help at the fire. There were 53 fire apparatuses and approximately 73 fire personnel on the scene to help battle this blaze,” the Everett Fire Department said.

At least 10 agencies responded to the fire.

There is no word yet what caused the fire. The Everett Fire Department, Everett Police Department, and the Bureau of Alcohol, Tobacco, Firearms and Explosives are investigating. 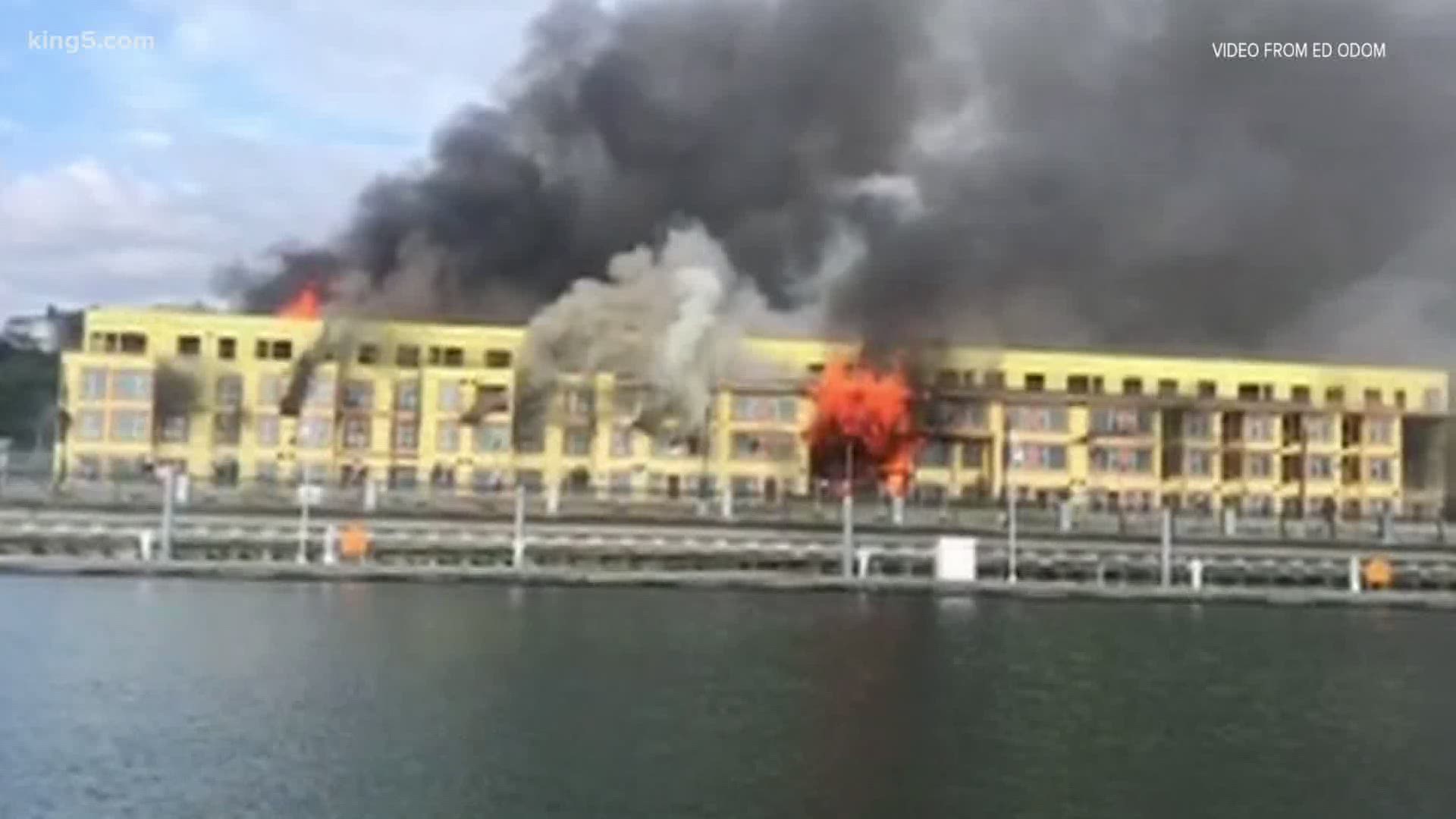 The Snohomish PUD cut power to around 1,000 customers in the area as a safety precaution, but the outage map shows power has since been restored.

The Everett waterfront has been undergoing massive redevelopment.

The Port of Everett said the 266-unit Waterfront Place Apartments were under construction at Fisherman’s Harbor. The Port's website said, "This highly anticipated project brings housing to the waterfront for the first time in Everett’s history."

In a statement, Everett Mayor Cassie Franklin said she was “grateful” to hear the Port of Everett and its project partners were committed to rebuilding.

“I am incredibly grateful for the leadership of our Everett Fire Department, our local partners and all of the first responders,” said Mayor Franklin. “This tragic event could have been far worse, but their actions, courage and ability to coordinate across multiple teams and agencies ensured this four-alarm fire was contained. I’m also tremendously heartened by the acts of kindness from all of the neighbors who rose to the challenge to help keep each other safe.”

RELATED: Growing up in Snohomish County: How Everett's waterfront is taking shape

Embers from the Everett fire drifted several blocks and ignited a home in this neighborhood. Firefighters were able to save the home. pic.twitter.com/5SFYUkziFT

Boat Owner Ed Odom shot this video shortly after the fire ignited over an hour ago. He believes construction workers had left for day by the time the fire erupted. @KING5Seattle pic.twitter.com/fIDN00Hlym

#BREAKING - @EverettFire working a impressive structure fire along Marine View Drive. This is the view from Mukilteo about 5 miles from the fire. Flames appear to be 50+ feet high from this vantage point. @KING5Seattle pic.twitter.com/HAXNdnNKkB

Massive fire near the Everett marina. It was an apartment complex being built. pic.twitter.com/VMEyGsgJYg 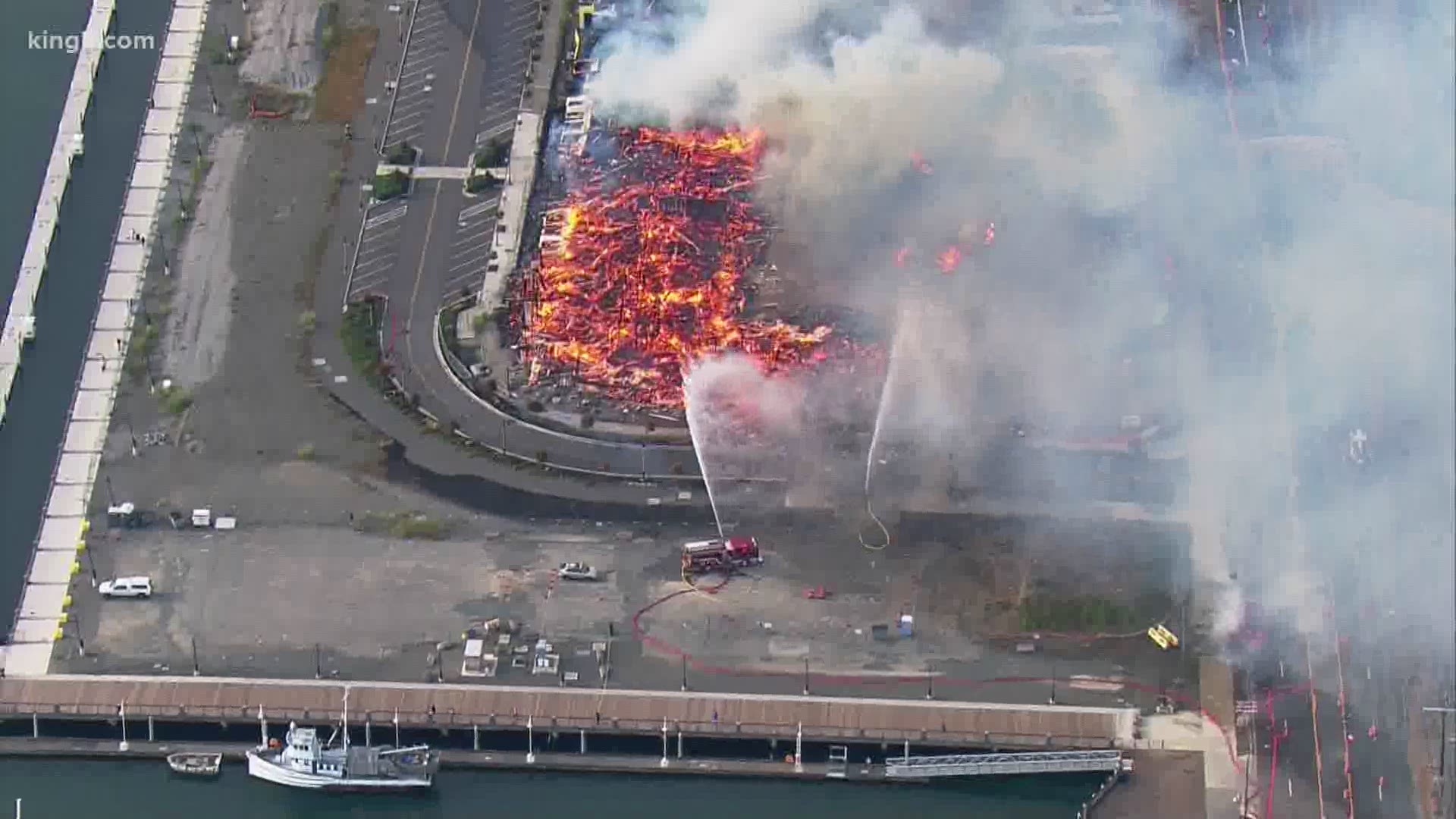