Kitsap County recently passed a resolution that stops the use of Roundup on county-owned land, except in the case of noxious weeds. One farmer wants a bigger ban. 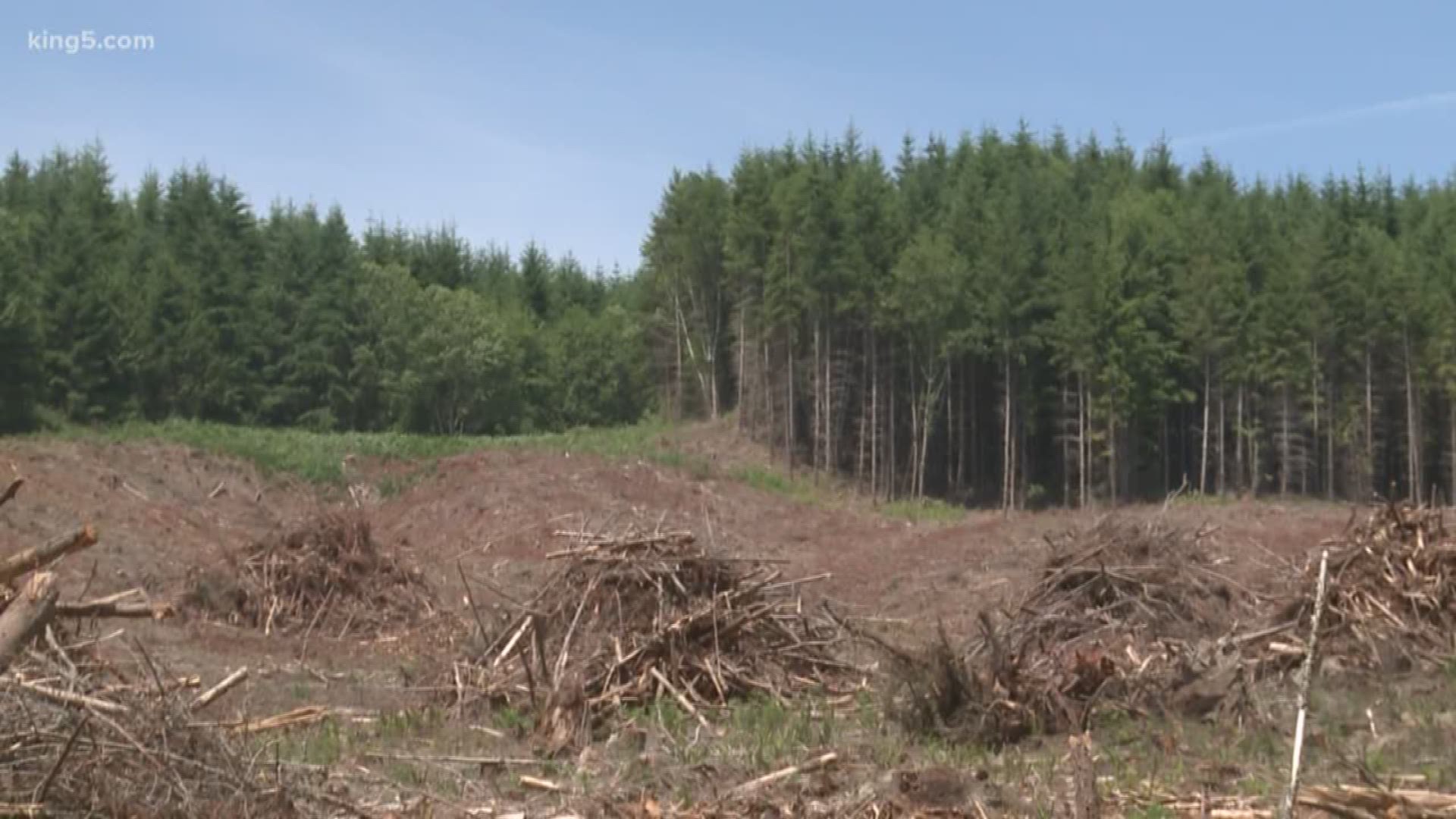 POULSBO, Wash. — Kitsap County recently passed a resolution to stop the government from spraying glyphosate, or RoundUp, on public land, except to deal with noxious weeds.

The product is regularly used after clear cuts on timber farms and often sprayed from helicopters or airplanes.

“I feel like right now I’m in a war zone,” said Lisa Hurt, of Rainbowzen Farm. "If they do the aerial spray store next-door, that might protect some of my crops but it would not protect any of the fruit trees, any of the vegetation that’s outlying. Ability for overspray or drift, as they call it, could affect my organic farm and all of this past year right here that were looking at.”

State law does not allow municipalities to ban private use of the chemical.

Kitsap’s resolution does not prevent private landowners or private businesses from using RoundUp, but that hasn’t stopped a movement to try to ban aerial spraying of glyphosate in Kitsap County altogether.

“It is part of what we’re seeing. There is very clearly a national and international movement to restrict or prohibit the use of glyphosate,” said Bainbridge City Council Member Rasham Nassar.

Nassar plans to file a resolution that, if passed, would make public her city’s support of a county-wide aerial spraying ban.

“People look to local governments to protect their health and safety. The bottom line is we do not want anything that has been linked to cancer, that has the potential to pollute our ground water, to commit toxic trespass across playgrounds and across places where people recreate, and especially Puget Sound,” she said.

One of the state’s largest timber companies, Pope Resources, owns land that was recently logged near Hurt’s farm.

The company maintains that it tries to be a good neighbor and takes inventory of the best management practices for specific sites.

“Safety is always our top concern — for our employees, our contractors, our neighbors and for those who enjoy recreating on privately owned timber lands. As is our practice, we evaluate each application site on a case by case basis: Pope Resources will not just automatically aerially spray an area for weed control. Part of that evaluation includes the site conditions, including proximity and density of adjacent residents. In many cases we look to other ways to treat noxious weeds, such as with the use of backpack sprayers rather than aerial applications,” wrote Adrian Miller. “Pope Resources also continues to review the use of all chemicals approved as safe by state and federal regulatory agencies, including glyphosate. As you know, every herbicide and related application protocol faces rigorous regulation and scrutiny by state and federal officials. We supported the Legislature’s new herbicide workgroup, which is currently reviewing the aerial application of herbicides in forestry.  We think this is an appropriate venue to address many of the concerns that have been raised here locally.”

"The resolution of the Kitsap Board of County Commissioners was enacted in response to concerns brought forward by residents of the county. It in essence has the effect of establishing policy and direction for the departments over which we have direct authority. Where as an ordinance has the effect of local law/regulation, a resolution was the first step as some of the commitments include future, aspirational direction that could later be codified. The direction from the resolution specifically commits the county and its departments to discontinue broadcast spraying of glyphosate on county owned or maintained properties and rights of way. The only caveat was reserving it as a targeted tool when working on noxious weed eradication. Also, county departments will pursue other cost-effective options for vegetation management, i.e. natural-based herbicides or mechanical means, etc. We will also get clarity from the Kitsap Prosecuting Attorney’s office relative to the extent to which the board has jurisdiction on the use in general within the county. The state plays a large role in the approval and permitted use of glyphosate in forest practices, so an important part of the next steps is working with our legislative delegation and state agencies on moving forward. The legislation sponsored by Sen. Rolfes, and adopted this year, will go a long way to furthering the conversation. Finally, it really comes down to each of us and what we do at our own homes. The hope would be to partner with others, like Cooperative Extension, etc. to help educate homeowners about other options for tackling weeds at home. We truly are talking about a cumulative impact."

The EPA recently reaffirmed its conclusion that glyphosate poses no risk to public health.

The herbicide’s producer, Monsanto recently purchased by Bayer, has lost a string of lawsuits over cancer, one lawsuit for $2 billion dollars.