City of Kirkland urged shops to close prior to peaceful demonstration

A Monday demonstration was peaceful, as protesters and Kirkland police knelt together. But downtown businesses prepared after looters hit nearby cities. 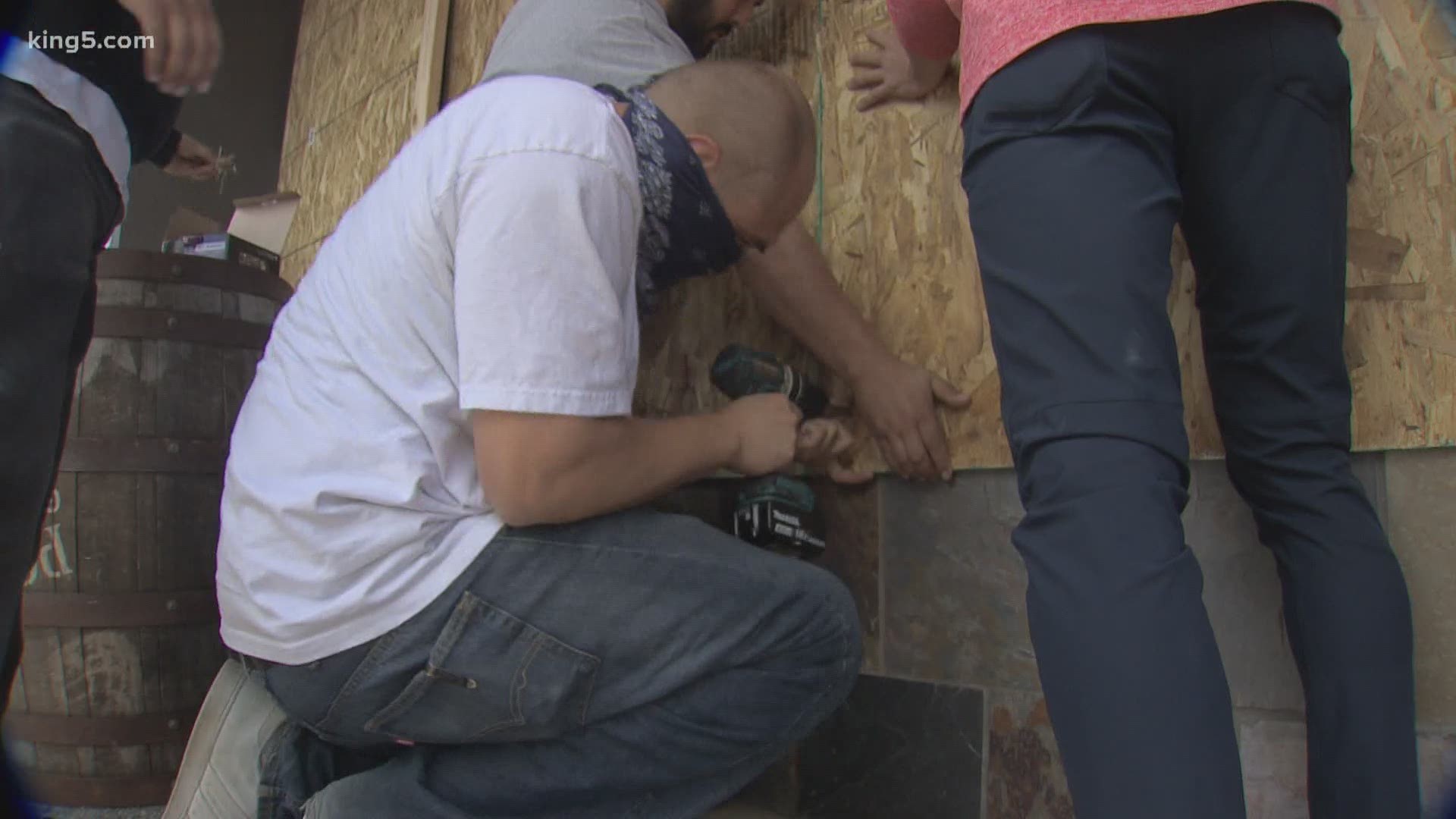 KIRKLAND, Wash. — The city of Kirkland declared an emergency on Monday afternoon, and encouraged businesses to board up and remove any valuables.

It was an unusual declaration, and was in anticipation of an afternoon demonstration that came and went without any major disturbance.

Yet, businesses along Central Way frantically pounded in plywood as if a major windstorm was about hit the region.

Roughly a dozen or so middle aged white men armed with rifles also walked the sidewalks, claiming they were there to protect the city.

The bizarre scene played out as a bit of an aftershock to a series of seismic protests over the weekend.

There was widespread looting in Seattle, Bellevue, Renton, and Tukwila.

Rioters tore through Bellevue Square mall for several hours before Bellevue Police were able to control the scene.

That led to a volunteer effort Monday morning to clean up the mall, and several damaged businesses.

Congresswoman Suzan DelBene also toured the area, much like an elected official would after a storm.

"This is just absurd," said Dan Larsen, in between driving nails into a piece of wood outside an arts store in Kirkland. "People are just taking advantage."

He believes the looting is part of a perfect storm of circumstances.

"People sitting at home for two months, don't have a job, laid off," he says. "I think we're seeing a steam valve that has been opened, people are letting off steam, it's the wrong way to do it, crazy youth you know, I don't see old guys out there breaking windows."

Down Lake Street, Abdul Kahn was trying to figure out what to do next.  His smoke shop was given about an hour's notice before the emergency went into effect.

"I think we have less police force and people are taking advantage of it," he said.  "Because of coronavirus, everyone has masks, so it's hard to identify who is doing what."

A few doors down, a local clothing store was unloading dresses and coats before boarding up, and a family owned Mexican restaurant was doing the same.

"We're just trying to protect our business," said Jovana Rodriguez.  "I totally understand the protest and I'm all for it, the violence is becoming a little much."

The afternoon demonstration, which prompted it all, involved roughly 75 people chanting "Black Lives Matter" and holding up signs bearing George Floyd's name.  They came to a major downtown intersection, and kneeled, before chanting to police "Kneel with us, Kneel with us!"

Multiple Kirkland police officers complied with the request and kneeled.  The crowd erupted in cheers, and a handful of people gave celebratory, pandemic approved, "elbow bumps" to police.

Then, everyone walked away.