A protest is planned for Tuesday outside a Kirkland yogurt shop after the owner called police and asked for a black man inside the store to be 'moved along.' 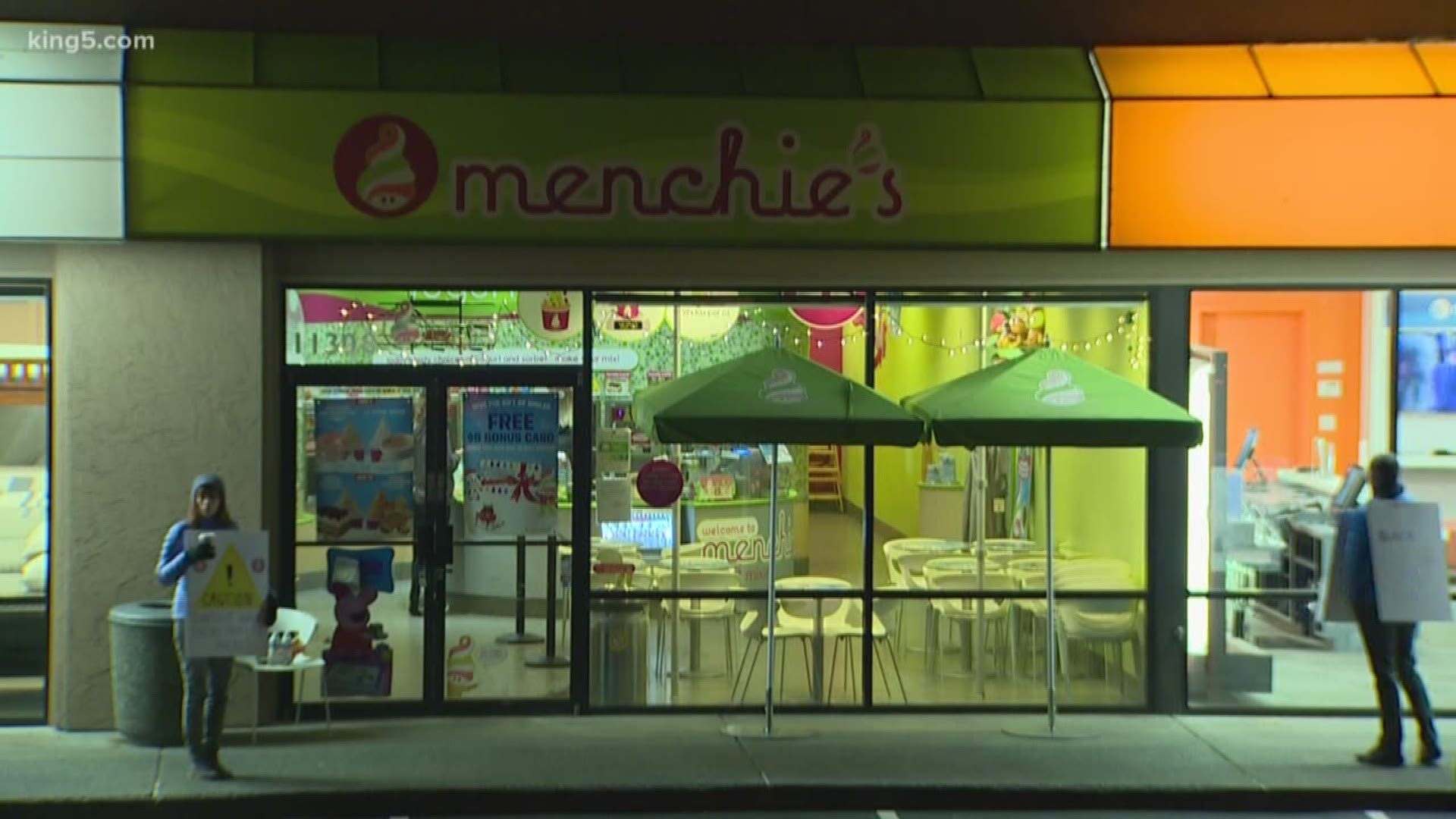 On Monday night, protestors held signs outside the Totem Lake Menchie's after learning what happened there November 7.

That was the day Ramon Cruz, owner of the yogurt shop, called 911. He asked for police to respond and tell Byron Ragland, a black man inside the store, to move along.

Mark and Kimberly Morgenstern showed up to protest Monday evening.

"What happened to this guy, Byron Ragland, is just absolutely not okay," said Mark. "He's doing nothing but sitting in a store while being black."

They decided to wave signs in front of the store after reading about what happened to Ragland.

"Not everyone has been supportive, but for the most part people have been like, right on, thanks for taking action," said Kimberly.

Ragland, a veteran who served in the United States Air Force for nine years, now works as a court-appointed visitation supervisor. That's what brought him to Menchie's on November 7. He was supervising a visit between a mother and her 12-year-old child. Then police were called.

On a 911 recording provided by the city of Kirkland, you hear Ramon Cruz's voice.

The dispatcher asked several questions, including the man's race.

"He is African-American from what I can see from the camera," Cruz answered.

During the call, Cruz also said, "There were multiple incidents in our store before, homeless shooting drugs in the restroom, and we also got robbed before."

He finished the call by asking that the man be told to move along.

Police arrived and told Ragland that the manager had been watching him on the cameras, and requested he leave the property. Ragland said the request was not necessary, and he was there for a visitation. Police then asked for Ragland's full information along with information for the mother and child. That's when Ragland refused. He left the store along with the mother and child he was supervising.

Based on the preliminary investigation, Kellie Stickney, a spokesperson for the city of Kirkland, says they could have handled the situation differently.

"We could have used this opportunity to mediate a misunderstanding between the owner, Mr. Ragland, and the individuals that were with him before they got so upset that they left the store," said Stickney. "That's a missed opportunity and something we can work on moving forward."

Ramon Cruz, the owner of Menchies issued this statement:

I am truly sorry about what occurred at my store.

I humbly apologize to Mr. Ragland for what he experienced during his visit. This does not reflect my values, and I am genuinely sorry.

We are in the process of reaching out to Mr. Ragland with a formal apology. I would also like to humbly apologize to everyone, as events such as these affect us all.

I am sorry, and I and my team will learn and grow from this. We will work hard together to make sure that this will not happen again.

Cruz also said he is changing his policy. He used to tell employees that if they do not feel safe, call police. His new rule for employees is if they don't feel safe, call him and he will go to the store to address any issues. He also added that when he called police on November 7, he was under the impression that Ragland was not with anyone. He says once officers realized that was not the case, they should have changed their response.

Eddie Rye Jr. plans to stand alongside the NAACP, Civil Rights leaders, and Byron Ragland during a protest outside of the yogurt shop on Tuesday morning.

"We are doing this because we can not tolerate and condone racial profiling," said Rye. "It is just really, really tragic to have this happen to a person who gave nine years of his life defending the United States of America, to have him treated the way he was treated."

City leaders are expected to address what happened during a meeting Tuesday night at City Hall.