The state's inspection rate of gas pumps is far lower than neighboring states, and it could be costing you at the pump. 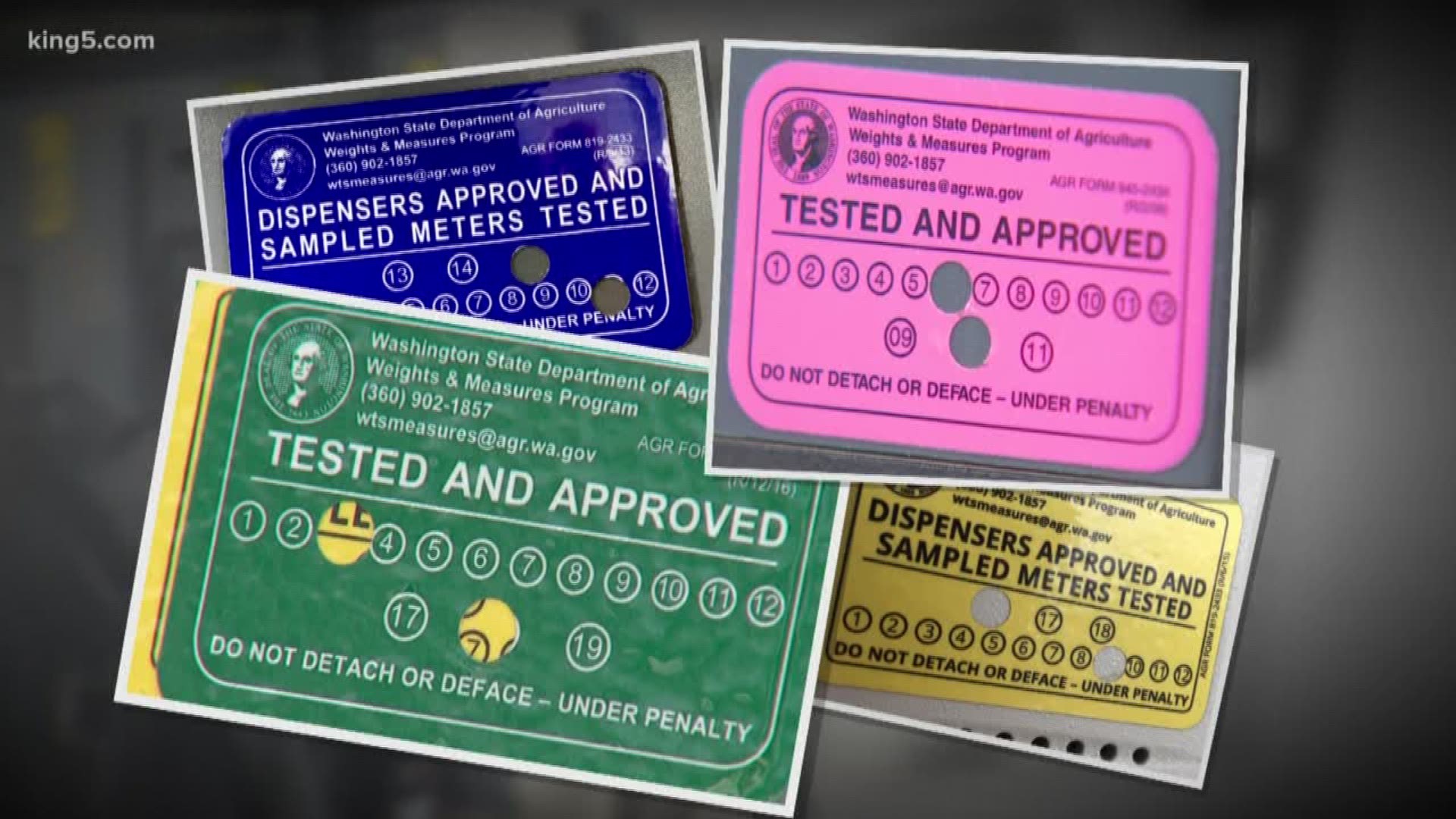 As MariAnne Scott stood at the gas pump at the Highline Chevron, she knew something was wrong.

“I know how much it costs to fill up my tank, and this was $5 to $7 more than I regularly pay,” said Scott of her stop at the Des Moines gas station in January.

Then she noticed the pink sticker on the pump that indicated it had not passed inspection by Washington’s Weights and Measures Program since June 2010, nearly eight years ago.

Credit: KING
A sticker at the&nbsp;Highline Chevron shows the gas pump was last inspected in June 2010.

“If it’s not regulated, it’s like someone putting their finger on the scale every time you buy something,” Scott said.

The Chevron’s owner disputes that his pumps were inaccurate, but records show that the Weights and Measures inspector who responded to Scott’s complaint found the pump shorting customers by nearly a cup of gas for every five gallons pumped. The pump was corrected and earned a passing grade when re-inspected a month later.

The case highlights a growing problem in Washington State.

A KING 5 investigation found the 114,000 registered weighing and measuring devices in Washington undergo fewer state inspections than those in much of the rest of the country.

And a plan is in the works that would reduce the inspection rate even further. That would make consumers more vulnerable to being the victim of inaccurate readings at gas pumps, deli scales, and taxi cab meters.

Inspectors say inaccuracies reported by customers or discovered by inspectors are usually unintentional and can be blamed on equipment that has not been properly maintained.

Unlike some other states, Washington has no law requiring device inspections at specific intervals. Documents received through a public records request shows the Weights and Measures Program loosely adheres to a “three-year inspection cycle.” That means inspectors try to test each device once every three years.

In neighboring states Idaho and Oregon, there are three times more inspections. Spokespersons for Weights and Measures departments in both of those states say their inspectors check each device about once a year.

A one-year inspection cycle is recommended by the National Conference on Weights and Measures.

KING 5’s check of gas stations in the Puget Sound area found a 76 Station in Burien that has not been inspected since April 2008, 10 years ago.

Credit: KING
A sticker at the 76 Station in Burien shows the pump was last inspected in April 2008.

“We do the best we have with the resources that we have,” said Weights and Measures Program Manager Jerry Buendel.

But the man who oversees 10 inspectors statewide admitted that testing devices once every three years is not enough to ensure their accuracy.

“It causes concern on our part,” said Buendel.

“For fuel dispensers we run about a 10 percent rejection rate,” he said while pointing out that pumps can be rejected for issues other than inaccurate metering of gas.

Buendel said a more frequent inspection schedule puts pressure on gas station owners to perform regular maintenance on their pumps to keep the meters accurate. He said that Weights and Measures has found that as the number of the state inspections has fallen, the percentage of pumps that are out-of-compliance has increased.

Weights and Measures inspectors try to educate owners that faulty pumps can work the other way too and give customers more gas than they’re paying for.

“There’s a cost with either giving product away or having a bad reputation with the people you service,” said Buendel.

The problems at Weights and Measures have been noted at the highest levels of Washington government with no resolution.

House Bill 1773, introduced in the most recent legislative session, proposed raising the rates to register devices and potential fines for violations. It could have allowed Weights and Measures to hire four additional inspectors. The bill never made it out of committee, even though it would not have cost taxpayers any more money – and industry groups did not oppose the measure.

Documents submitted to the legislature show that the Weights and Measures Program may be forced to cut 18 percent of its workforce – including three inspectors.

In October 2017, she had problems getting gas at the HiWay Grocery and gas station in Buckley. She called Weights and Measures, and the inspector who responded rejected every single pump at the gas station, including one that would charge customers 45 cents before it pumped gas – a malfunction known as “meter jump.”

“(So now), every time I go to a gas station I’m like, hmm. Am I getting the right amount of gas?” she said. “We need inspectors. We need to do this right,” she said. 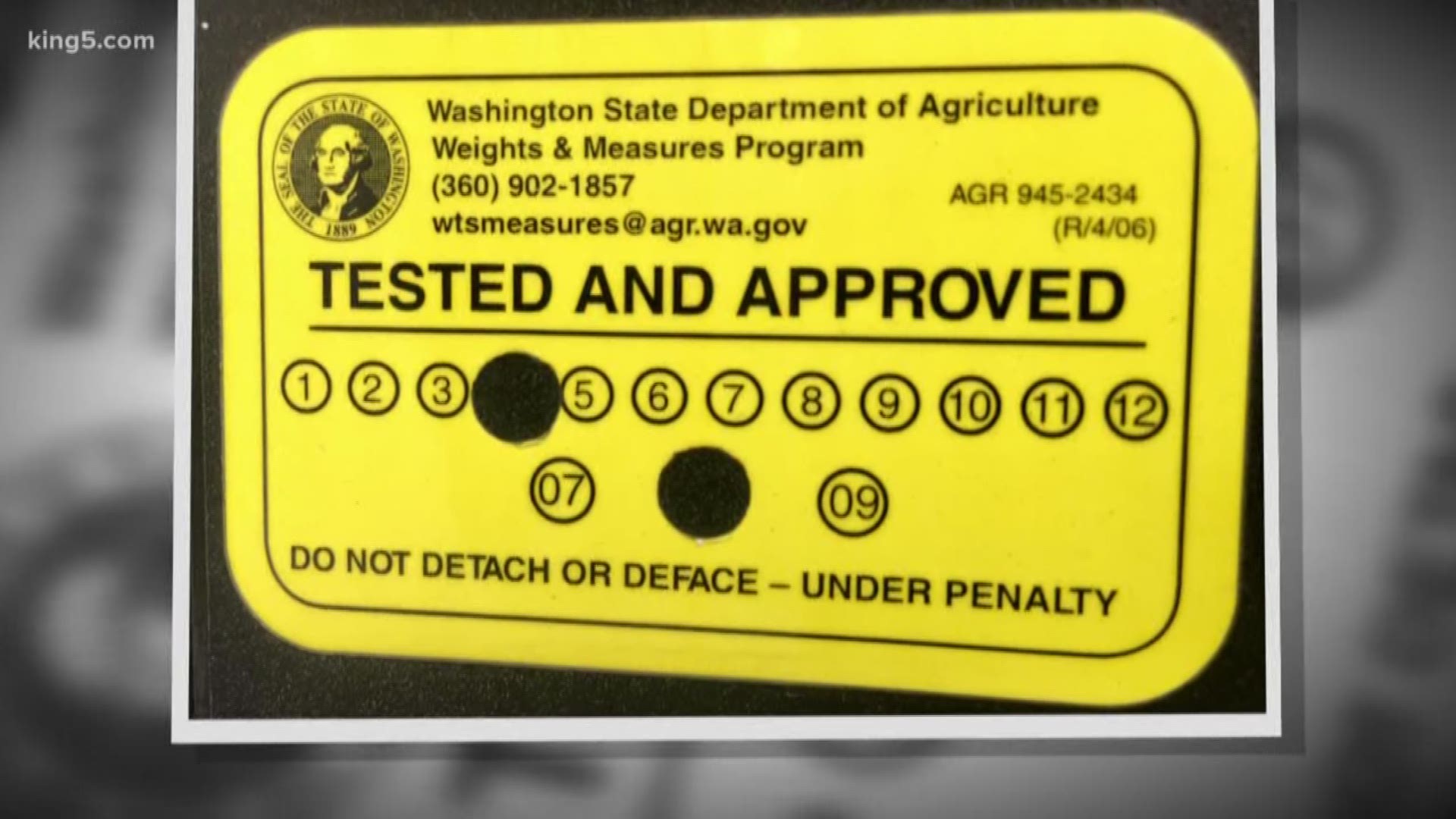