To get guns out of the hands of known abusers, a new King County task force is working to make sure they surrender their firearms to police. 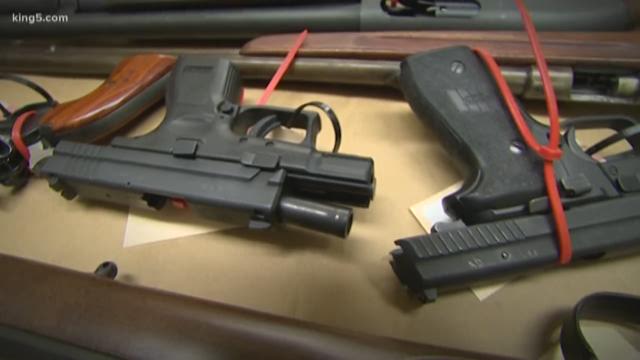 Guns and domestic violence are a lethal combination: In the last decade in Washington, nearly 400 victims of domestic abuse were killed in shootings.

To get guns out of the hands of known abusers, a new King County task force is working to make sure they surrender their firearms to police.

“Our mission is to ensure that defendants who are subject to protection orders are turning in their firearms, and reducing risk to victims,” said Chris Anderson of the Seattle City Attorney’s Office.

The Regional Firearms Task Force targets people who have been served with domestic violence protection orders, also known as no-contact orders. The orders require the respondent to stay away from the target of their abuse, typically a family member, spouse, boyfriend or girlfriend.

People served with those protection orders are also served with a “weapons surrender order” that requires them to turn all their firearms over to police, or to swear in court that they don’t own firearms. The law exists because national statistics compiled by the American Journal of Public Health show that abuse victims are five times more likely to be killed if their abuser has access to a gun.

Since the task force started enforcing that law in July, the number of guns seized or handed over to police by accused domestic abusers has quadrupled to 129 firearms recovered in a five-month period.

In King County alone, more than one thousand domestic abuse suspects are served with civil “weapons surrender” orders each year. State and federal law bar those people from purchasing or possessing firearms.

In May, however, a KING 5 Investigation revealed that half of the people served with weapons surrender orders did not respond to them. The orders are ignored by most recipients -- respondents often do not show up for hearings at which they are supposed to prove they do not have firearms. Some of those court hearings have 30-40 people scheduled to appear, yet KING saw only three or four respondents show up.

Anderson, of the Seattle City Attorney’s Office, knew the widespread disregard for the law meant that some victims' lives were in danger, so he said he decided to take action.

In May, Anderson convinced Seattle City Councilmembers Sally Bagshaw and Tim Burgess to find $300,000 in the budget to help fund the task force. King County Executive Dow Constantine was persuaded to pledge more than $700,000 in additional funds.

With a $1 million budget, the task force now has prosecutors from Seattle and King County, officers from the Seattle Police Department’s domestic violence unit, and two new “firearms coordinators.”

The task force researches all domestic violence protection orders filed in the county, scanning for any evidence of firearm. Members question victims and witnesses to determine if accused abusers are lying about their access to guns. They then present information and evidence to the judge presiding over firearms hearings.

The death of Tabitha Apling last year is an example of what is at stake. The 32-year-old Federal Way mother was gunned down by her abusive ex-boyfriend 12 days after she got a protection order against him.

Apling’s mother, Kathy Gach, says the boyfriend pulled the gun from a shoebox in his closet.

She wonders if things might have been different if authorities had relied on something more than an “honor system” for abusers to give up their guns.

“’Do you have a gun? Oh no, I don’t have a gun.’ I mean who is gonna say, ‘Oh yeah, I have a gun. I’ll give it to you,’” Gach said incredulously. “But they need to go further. They need to investigate it. They need to find out from the victim if there’s a gun. Sister. Brother. Friends. Have you seen a gun?”

Now, in King County at least, those questions are being asked.

Seattle Police Department Domestic Violence Unit Sgt. Dorothy Kim led KING 5 into the police property room where more than 20 firearms seized by her department are in storage. The weapons include a Glock handgun, an AR-15, bolt action rifles, and a revolver with a scope.

They are all guns that accused abusers denied owning, until police and prosecutors started asking them deeper questions and, in one case, obtaining a search warrant.