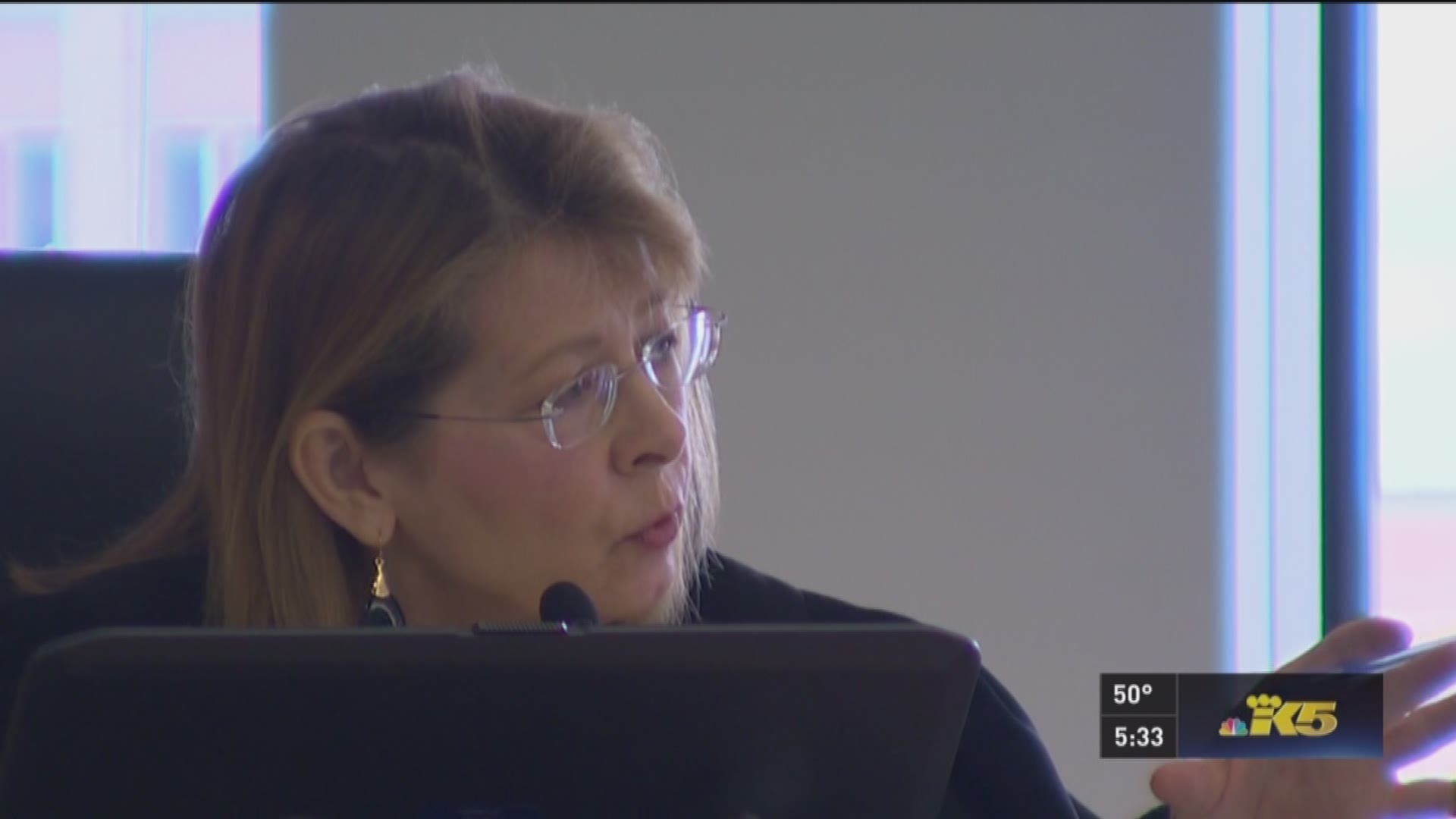 Snohomish County Superior Court Judge Anita Farris has issued oral rulings on a parental rights case, the likes of which few people in legal circles have read before. “It is unbelievable,” said one Snohomish County attorney familiar with the ruling, dated February 25, 2016. “It’s crazy, it’s nuts,” said another person who works in the legal field in Everett.

The ruling centers on the actions of an officer of the court, Cynthia Bemis, a Snohomish County volunteer guardian ad litem (VGAL), her supervisors, and the Snohomish County juvenile court administration that oversees the VGAL program. VGALs are court-appointed advocates assigned to children caught in the middle of CPS cases, where the state of Washington (DSHS) is moving to permanently terminate the rights of parents, leaving their children free to be adopted. These highly emotional cases take place when abuse or neglect has taken place and the parents have allegedly not followed court orders to get help or have been unable to prove to the court that they’re fit to safely parent. The VGAL is charged with making sure the child’s best interests are represented to the court.

In the case at hand, Judge Farris ruled that last year VGAL Bemis was caught breaking the rules by spying on adversarial parties for up to five years, and then passing along the information to be used against parents fighting to get their children back. Farris explained in open court that Bemis “infiltrated” a Listserv set up exclusively for members of the Washington Defenders Association (WDA), a non-profit that provides resources for public defenders. The Listserv is a group email site, with clearly marked policies on who is allowed on it, where defense attorneys exchange confidential emails, often detailing strategy to help their cases.

According to WDA, VGAL’s regularly side against the parents, and instead, align with the state’s wishes.

“VGAL Bemis accessed the Washington Defender Association dependency Listserv for four-and-a-half years; knowing that she was not qualified to be a member and knowing that she was stealing for-pay subscription informational services without paying for them. She improperly used the county e-mail system and her VGAL pseudonym to commit the crime of theft,” ruled Farris. “VGAL Bemis’s intent in getting onto this Listserv, at least in part, was to surreptitiously gain opposing counsels’ thought processes on cases and strategies and to surveil conversations between opposing counsel relating to dependency strategy.”

“I’d say the most egregious part is the violation of trust,” said public defender Adam Ballout, the attorney who discovered the breach into the Listserv. “A common, reasonable person would know if I’m not involved in an area of this work I shouldn’t be reading these emails….We cannot allow the desire to win a case to trump what people’s job duties are and what their responsibilities are especially with kids. The best interest of children cannot be pushed aside to win a case,” said Ballout.

Court records show the VGAL changed her story, under oath, about how she got on the site and what she was doing there. Her declaration to the court, said Farris, was “filled with lies” and was “a made up sham."

In a declaration dated November 2, 2015, Bemis said she “applied to the site online” and “clearly indicated I was a VGAL." Her sworn declaration went on to say she mostly used the Listserv to obtain training free of charge and that “I never read or saw any information …that involved the discussion of confidential or strategic information…and I never forward any such information to anyone.”

The county checked. In fact, Farris ruled Bemis opened hundreds of emails, many clearly marked “confidential” and did include strategic information. Emails were indeed forwarded on to others as well, which is against WDA policy, clearly communicated on the Listserv.

In addition, the WDA said online sign-ups to the Listserv weren’t available when Bemis got on it in 2011. At that time, you could only sign up with a written form. The WDA also found Bemis did not indicate she was a VGAL and that she never participated in any of their trainings.

“VGAL Cynthia Bemis’s first sworn declaration to the Court about how she got onto the Listserv is perjury. I’ve only used the ‘P word’ once in 23 years on this bench and it applies in this situation,” said Farris.

Bemis submitted a second declaration on November 24, 2015, with a different story. Instead of signing up through the standard process, she admitted she got onto the site after a fellow VGAL emailed her a link to it. Bemis also admitted reading and forwarding an email. “I forwarded the email to my program coordinator. I had no idea that forwarding this email was a violation of the listserv policy,” wrote Bemis.

“It’s just stunning. We did not expect anything like this,” said Christie Hedman, WDA administrator. “If confidential information is being forwarded on to adversarial parties, that really undermines the credibility of the whole process.”

Bemis sent a text to KING 5, denying any wrongdoing.

“This is a situation that has been blown way out of proportion. I have been a respected participant in the legal system for 40 years. I joined an email Listserv and did not hide that from anyone. My commitment to the welfare of children has never changed and never will,” wrote Bemis.

The Listserv issue has brought to light allegations that the Snohomish County VGAL program, in existence for 30 years, is fraught with systemic problems. Judge Farris ruled that Bemis’s supervisors knew or should have known about the inappropriate use of the Listserv. She also ruled program administrators had ample opportunity to verify the truthfulness of Bemis’s declaration.

“It is now proven and known that these are lies. The Snohomish County VGAL Program knew or should have known that this was a lie and submitted it (the declaration) anyway,” said Farris.

Other problems have surfaced. In court on Wednesday, the former head of the VGAL program, Jessica Gurley, admitted they had never trained their volunteers or staff on Washington state guardian ad litem rules, which spell out their responsibilities to the court, confidentiality laws and other important aspects of the job.

Another systemic problem that’s surfaced from the Listserv incident is a lack of understanding by the VGAL program and the juvenile court administration of what to do when a complaint is received about a VGAL. After Adam Ballout lodged a complaint against Bemis upon learning she was inappropriately on the Listserv in May, 2015, the complaint was quickly dismissed by program coordinator, Jaime Peniche. Subsequent testimony revealed the complaint process has not been followed as per state law for at least a decade.

“For 10 years, the Snohomish County VGAL Program, according to their own testimony, has violated the required VGAL grievance procedure rules in a way so as to insulate what it does from the review contemplated to be available under the rule,” ruled Farris. In other words, court administrators are accused of protecting their own by summarily dismissing any complaint against a VGAL.

The Snohomish County Superior Court Judges issued a letter on March 22 to attorneys and staff who work on these cases to assure them they are now aware of the issues and are taking action.

“We are already working on changes to the local court rules for processing grievances regarding volunteer guardians ad litem, to be adopted on an emergency basis,” wrote Presiding Judge Linda C. Krese and Judge Ellen J. Fair, Chair of the Juvenile Committee.

“The bottom line is they still don’t get it. The manager doesn’t get it. The (VGAL) attorney doesn’t get it and the program coordinators don’t get it,” said Monty Booth, a public defender for parents and member of the WDA. “They have gotten away with it for so long, unchecked by the court, that it’s hard to change the culture within the program. I think they need to clean house,” said Booth.

Defense attorneys and Judge Farris worry the misconduct will impact the stability of children in Snohomish County. If it’s found VGAL Bemis or her superiors skirted rules in other proceedings, the cases could be reopened, potentially jeopardizing a child’s adoption or other placement.

“Nobody wants to receive that phone call that potentially the stability of a child in their home is now being called into question or undermined or jeopardized because of the misconduct of a party that was supposed to be looking out for the best interest of the child,” said Ballout.

“This is uncharted ground for us,” said Snohomish County Presiding Judge Krese. “We certainly want to do the best we can to correct any problems that there may be. Whatever problems there may be, certainly the program has done a lot of good work over the years. It’s a great program with many volunteers who support these kids.”