Govenor Jay Inslee has signed a bill to better protect disabled citizens in Washington - legislation that was sparked by a KING 5 investigation. 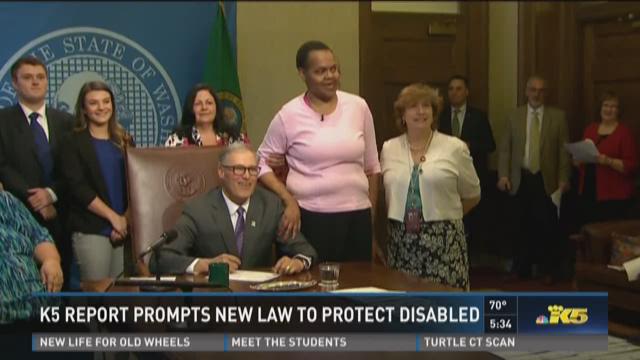 Laura Gholston burst into the governor’s office conference room Friday afternoon, flanked by her guardians and advocates for the developmentally disabled. With a wide smile and sparkling eyes, she shook the governor’s hand, then promptly got comfortable. She sat on Jay Inslee’s lap for the signing of the bill named after her, “Laura’s Act.”

Bill signing attendees and the media burst into laughter as the governor smiled and continued with business as usual.

“I’m so excited that Laura’s story has made such an impact and that what she’s endured will help others in the future,” said Loralee McDonell-Williams, one of Laura’s professional guardians. “If it saves one person from abuse, it’s worth it.”

Laura is a 48-year-old woman with severe developmental disabilities who has now changed state law – in style - for hundreds of vulnerable adults just like her. The legislation was proposed by Sen. Steven O’Ban (R-University Place) after reports about Laura’s life aired on KING 5 last year.

Over the course of seven years, DSHS investigators found that Laura’s sole caregiver, her nephew, neglected and abused his aunt in Tacoma. He repeatedly burned her with a meth pipe. He kept her in a filthy back bedroom, with a lock only accessible from the outside. She was neglected to the point that many of her teeth had rotted out. During the entire time period, the nephew was collecting monthly checks from the state to make sure Laura’s needs were met.

Laura’s only safeguard - once a year cursory visits from her DSHS case manager - didn’t catch any red flags about her deteriorating condition.

“The attention that you gave the Gholston case brought it to my attention and looking at it further we found we really did have a systemic problem for those who are most at risk,” said Sen. O’Ban.

The bill requires DSHS to visit developmentally disabled clients who are most at risk of abuse and neglect three times a year. Current policy requires just one visit. At least one of the visits has to be unannounced – no more heads up weeks beforehand.

Isolation is the enemy

Experts in the field say the most at risk are the most isolated. Laura’s case fit that profile perfectly. While under the care of her nephew, she had no day programs, no therapies, no doctor visits or outings - a perfect set up for abuse to take place.

“All of these situations and many others could have been found much earlier and even prevented if some of the provisions of the bill had been in place,” said Diana Stadden, policy and advocacy coordinator for the ARC of Washington state.

In addition, the bill creates an ombudsman program specifically for the developmentally disabled. This is a resource that advocates have lobbied for more than 20 years. The office will be staffed with experts to provide more checks on vulnerable clients and to independently investigate complaints.

“People might say that because Laura is disabled, she’s not a member of society. That’s not true - just look at what she’s done. She has a bill named after her,” said McDonell-Williams.