From Belize to Soap Lake -- a murder or a suicide?

Tracy Nessl talks with KING 5's Linda Byron in her home in Soap Lake, Washington. Belize has issued a warrant for Nessl's arrest for allegedly murdering Tim McNamara, her uncle and the man she considered to be her husband. 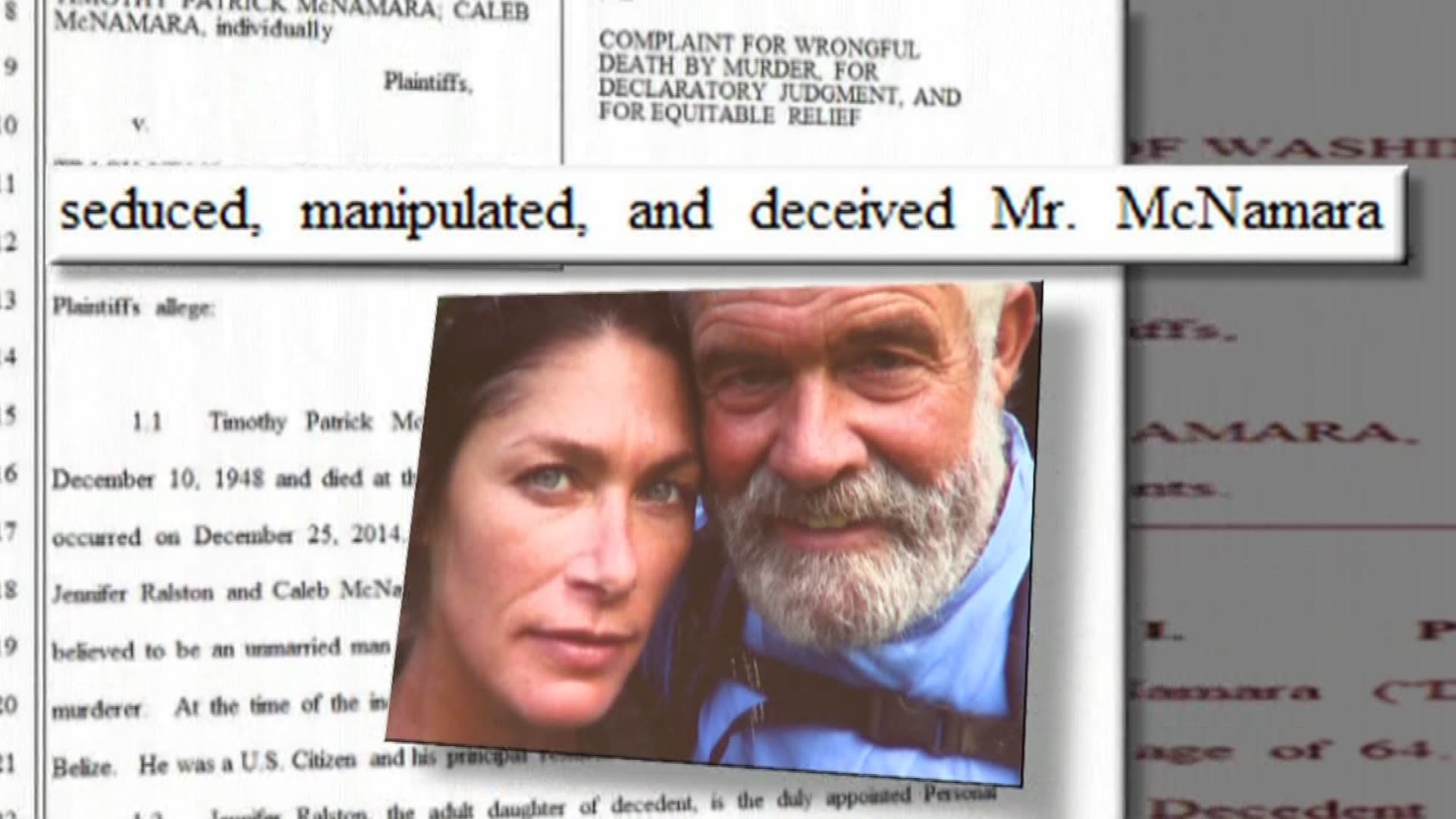 Editor's Note: This story was originally published in April 2016.

It's a story that reads like a movie script--fights over money and land dividing an Eastern Washington family amidst allegations of murder, incest, and betrayal. And it’s all unfolding in a small rural town named for the mineral rich waters of the lake that give the city its name—Soap Lake.

It’s here that 44-year-old Tracy Nessl says she fell in love with Tim McNamara—a hardworking farmer with deep roots in the community.

From Belize to Soap Lake -- a murder or a suicide?

1 / 1
Tracy Nessl talks with KING 5's Linda Byron in her home in Soap Lake, WA. Belize has issued a warrant for Nessl's arrest for allegedly murdering Tim McNamara, her uncle and the man she considered to be her husband.

McNamara loved his family and his apple orchard. He was also going through his third divorce in July 2012 when he bumped into Nessl. She lived in North Carolina, but was visiting her grandparents in Soap Lake. McNamara and Nessl struck up a relationship and were soon inseparable.

“I didn't know him (Tim) as an uncle, I didn't know the McNamara's very much. He was the man I fell in love with. Our souls connected," she said.

Nessl said as a child she had never been accepted by the McNamara’s because she was an illegitimate child who was rejected by her father.

But Nessl’s romantic relationship with her uncle did little to endear her to the family.

"It was hard to know what to do," said Jennifer Ralston, Tim McNamara’s daughter. “Definitely a shock factor,” said Caleb McNamara, Tim’s son.

Believing family and friends would never accept their romantic relationship, Tracy Nessl and Tim McNamara left Soap Lake in early 2013 and moved to Belize to begin a new life together. Tim McNamara leased out his Soap Lake farm and with a $240,000 insurance payout he received from a failed crop, then bought a new farm in Belize, where he and Tracy began building a bed and breakfast. And they got married.

“I just felt like a princess,” Nessl said. “I was barefoot, Mac had flip flops on; it was beautiful,” Nessl said.

“He wanted my name to be McNamara,” she said.

But their new life couldn't erase their past demons. Tim and his kids stopped communicating. Tracy's teenage daughter was ordered to stay away from her new husband. And as time went on the pair struggled financially.

In December 2014, Tim and his children began exchanging e-mails again. In one of them, Caleb McNamara suggested his father consider selling the Soap Lake farm to alleviate the financial pressure. Tim rejected the idea. In fact, he'd quit claimed the property to Tracy in December 2012, shortly after their romance began.

“He loved his children immensely, but there was a fear that if he was to pass, it (the farm) would be sold right away and then his legacy would be gone,” Tracy said.

When their second Christmas in Belize arrived, Tim and Tracy were about to open their bed and breakfast venture when something happened that would destroy that dream forever. Tracy said she and Tim spent Christmas Day, which fell on a Thursday, working on the property because they were planning to apply for their board certification with the Belize tourism office on Monday. Tracy said she was doing dishes when the dogs started barking and Tim went out the back carrying the handgun he often used to chase away jaguars and mountain lions that would prey on their dogs and other animals.

Tracy said she heard the door slam and then a gun shot.

“And when he didn’t come back in, I went outside and he was laying on the deck,” she said. “I thought he was just joking with me, I told him he needed to get up,” Tracy said.

But Tim didn’t get up. He had a bullet wound to the head. Tracy said she didn’t know how to call police in Belize, so she drove to a neighbor for help, then returned home to wait.

“He was on his side and I was just spooning with him with a blanket over both of us to keep him warm,” Tracy said. It took a couple of hours for the ambulance and police to arrive.

Early news reports termed Tim McNamara’s death a suicide. But Tracy said within days, the lead police officer conducting the investigation told her that her husband had borrowed money from him and he wanted Tracy to repay it.

During a phone interview with KING 5, the police officer in question strongly denied asking Tracy for money.

In January 2015, Orlando Vera, forensic analyst for the National Forensic Science Service for the Ministry of National Security for Belize, issued a series of reports concluding that Tim McNamara “was not the one who fired the shot causing the wound.”

Four months later, on May 26, 2015, Belize issued a warrant for the arrest of Tracy Nessl, also known as Tracy McNamara, for murder. The warrant was posted on Interpol, the International Criminal Police Organization that facilitates cooperation between nearly 200 member countries, including Belize.

Tracy denies she harmed her husband. Asked if she pulled the trigger, Tracy responded, “No…we loved each other.”

“The evidence is all there; it's all there,” Jennifer Ralston said.

In September 2015, Ralston and her brother filed a civil wrongful death lawsuit against their cousin, alleging that “she seduced, manipulated and deceived” their father, “for the sole purpose of financial gain.” They allege that Tracy had Tim put multiple properties and life insurance policies in her name and then killed him.

Their Seattle attorney Karen Koehler said in an interview, “I think that they argued and she took her Glock (pistol), which she had just bought a couple months before, and shot him in the back of the head, that's what I think happened.”

Browne said Tim was depressed. In the days before he died, Tim had begun exchanging sentimental emails with his children, reminiscing about their past time together. The final e-mail, time stamped just hours before Tim McNamara died, was addressed to Caleb McNamara and read: "I sure have loved being your dad."

But what about the position of the fatal shot? “You don't shoot yourself in the back of the head; It's borderline impossible,” Caleb McNamara said.

Browne said it might sound odd, but it’s a common method of suicide for a person to shoot themselves in the base of the neck. “If I did that and pulled the trigger, it would be the exact trajectory of the bullet,” Browne said.

While the lawyers argue over the evidence, the question looms: Will Belize request extradition for Tracy to stand trial?

“I hope and I also believe that they will not,” Browne said, “the evidence is clearly corrupted and…there's no motive, Tracy's life is so much more difficult now than if Tim was alive.”

Tracy said that she is struggling with the 100-acre farm in Soap Lake but vows to keep at it. “I have a promise to fulfill to Mac (Tim)…to keep it running, to keep it going, to not ever sell it,” she said.

Belize police told KING 5 that the marriage between Tim McNamara and Tracy Nessl was voided once authorities learned that Tim was Tracy’s uncle. The marriage would also be illegal in Washington state.