The brains of at least three former Seahawks -- Center Grant Feasel, Defensive Back Doug Long, and Defensive Tackle Cortez Kennedy -- are part of a study at Boston University. 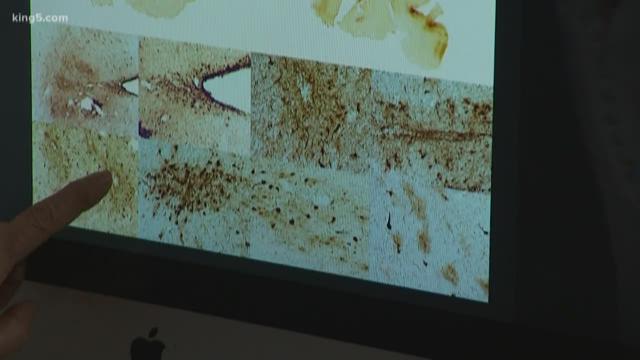 On the outside, Grant Feasel was a hard-hitting Seattle Seahawk, an offensive lineman who played center for ten years in the NFL.

But on the inside, an insidious disease was starting to envelope his brain, according to Boston neuropathologist Dr. Ann C. McKee.

"He had severe CTE," said McKee as she sat in her office in January looking at a slide through her microscope. "He was in his 50s when he died, but he had CTE that had started to affect widespread regions of his brain. It was really riddled with disease," she said.

Last month, the family of Seahawks Hall of Fame lineman Cortez Kennedy announced that his brain would be donated to Dr. McKee. Kennedy died last year from heart disease and other complications at age 48.

McKee made headlines last year when her research showed that 110 of the 111 brains of deceased NFL players that she studied showed evidence of chronic traumatic encephalopathy, a degenerative brain disease often referred to in shorthand as CTE.

McKee's study included an analysis of the brains of two former Seahawks: Feasel and Doug Long, a defensive back in 1977 and 1978. Other deceased Seahawks may have been involved, but they cannot be disclosed for privacy reasons.

There is clear evidence of CTE on the slide that shows a sliver of Feasel's brain.

"Every time you see anything brown, it's abnormal," said Dr. McKee as she pointed to widespread dark brown regions on the image of Feasel's brain.

McKee's research turned the football world upside down, revealing a pattern of hidden brain injuries that, at first, was met with skepticism inside the National Football League. But the league didn't take long to reverse its initial reaction, instituting "concussion protocols" for injured players and helping fund McKee's research.

McKee reported last year that the brain of former New England Patriot tight end Aaron Hernandez, who committed suicide while serving time for a homicide conviction, had the most severe CTE she had seen in anyone under the age of 40.

"I thought, 'They're going to need brains that are asymptomatic,' [from] people who played for a long period of time and don't feel like they have any issues," said Hasselbeck. He said researchers need to study healthy former players, too, so that their study is balanced.

McKee works for Boston University, but she is also the Director of Neuropathology at the Veterans Administration Medical Center in Boston. Her work there includes the study of traumatic brain injury suffered by combat veterans.

Currently, CTE can only be detected with a post-mortem dissection of the brain. But McKee hopes her research can lead to discoveries that would allow an early diagnosis and, possibly, a treatment to reverse the damage.

"The end goal has always been to help future generations, future athletes, future military veterans," Dr. McKee said. "We really want to be able to treat the disease."

Last month, the family of Seahawks Hall of Fame lineman Cortez Kennedy announced that his brain would be donated to Dr. McKee. Kennedy died last year from heart disease and other complications at age 48.

Grant Feasel's ex-wife, Cyndy, said just having a diagnosis for his declining health in the final years of his life could have made a difference.

Grant became an alcoholic and died of liver disease at age 52. But Cyndy didn't know the extent of his problems until Dr. McKee delivered the results of her research.

"It all started making sense to me that Grant had been losing his mind our entire marriage," Cyndy Feasel said.

Previous stories in this series: