DSHS: ‘A few bad actors' lead to violations at institutions for the disabled

A choking death, near drowning, sexual assault and more problems were found at our state institutions for people with developmental disabilities. What DSHS is doing about it. 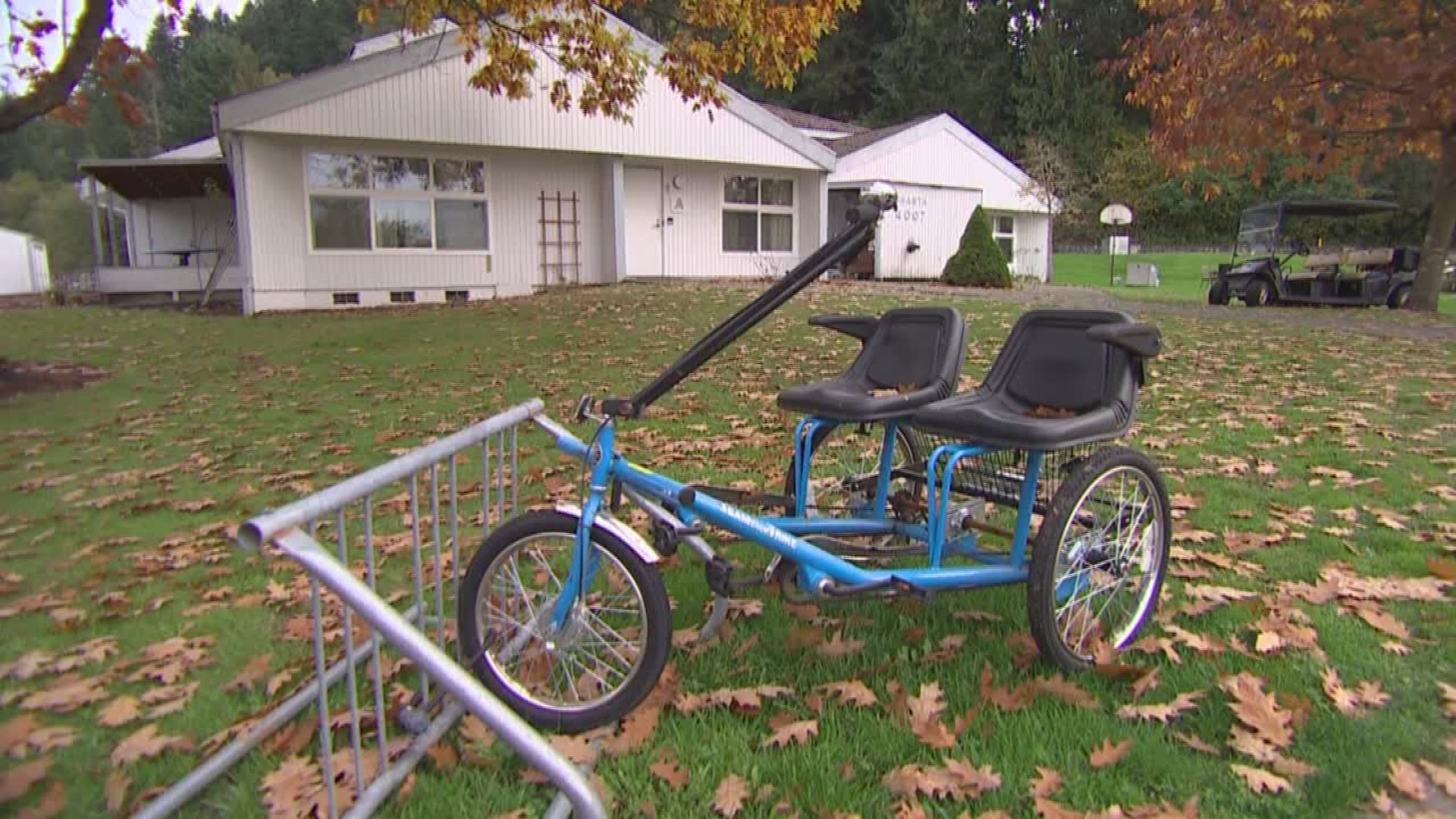 A top official at the state Department of Social and Health Services (DSHS), Developmental Disabilities Administration, says two of Washington’s four institutions serving residents with developmental disabilities failed inspections in 2016 due to “a few bad actors,” not system-wide failures by an administration that doesn’t care about the vulnerable clients they serve.

“There are a few bad actors. We try to identify them. We try to deal with them as effectively as we can. To say ‘we don’t care’ is just untrue,” said Don Clintsman, DSHS deputy assistant secretary of the Developmental Disabilities Administration.

“We care deeply about the people who we serve. We care about making sure people get services. The staff who work in those facilities, the majority of those staff are doing their very best job every day, and people are having good outcomes every day,” said Clintsman. “What the surveyors tell us is, ‘Yes you failed this survey, you get this citation, but we see improvement.’”

But that’s not the picture 2016 inspections by regulators painted. Violations found ranged from medication errors to failure to prevent a choking death. The KING 5 Investigators have found that inspectors noted so many violations of state and federal regulations in 2016 at Fircrest in Shoreline and The Rainier School in Buckley that they took the serious step of withholding federal funding for new admissions. The other two institutions for the disabled in Washington state, Lakeland Village near Spokane, and the Yakima Valley School in Selah are currently fully certified.

Approximately 800 residents with developmental disabilities such as Down syndrome and autism live in the four state facilities, known as Residential Habilitation Centers (RHCs). The federal government contracts with state experts to survey the RHCs to ensure they are in compliance with mandatory health, safety and treatment regulations.

In 2016, inspectors found repeat violations reported on in 2015 by KING 5. That year the Department of Health and Human Services Centers for Medicare and Medicaid Services froze new admissions at The Rainier School, Fircrest and Lakeland Village for an 11-month period until they made improvements to get back into compliance.

The 2015 violations ranged from staff exploiting clients financially to leaving vulnerable clients strapped to chairs and toilets for long periods of time without staff checking on them.

In 2016, there were no violations found involving the misuse of restraints.

But investigators did note several residents not receiving federally mandated “active treatment.” Active treatment means the staff should constantly be following each client’s plan to learn new skills aimed at creating more independence. Instead, the 2015 surveyors found dozens of clients spending their time with little to no meaningful activities. They found the same problem in 2016.

“When we still had a number of citations (in 2016) around active treatment, it’s disappointing. It was surprising because we thought we were doing so much better. And so it’s always a surprise when you find out ‘okay, we’ve come a long way, but we’ve got a long way to go’ and continue pushing on it,” said Clintsman.

Other violations found by inspectors in 2016 include:

- Failure to prevent the choking death of a man known to need assistance with eating.
- Failure to prevent a near drowning of a man who fell into a lake in his wheelchair during a Rainier School outing. Investigators found staff was not trained in water safety and did not have life preservers on any of the residents.
- Failure to prevent the sexual assault of an autistic, non-verbal client by a staff member.
- “Significant” medication errors.
- A staff member sleeping on duty.
- Failure to administer CPR to an unresponsive resident who died.
- Five nurses at Lakeland Village who had expired nursing licenses, yet were caring for patients.
- No First Aid training for staff at Fircrest.
- No qualified staff to appropriately help blind residents at Fircrest.

“The safety and well-being of our clients is paramount. We have submitted plans of correction to all of the survey outcomes and all of our plans have been accepted. A majority of the corrections have been implemented and the others are in the process of being put into place,” said Clintsman.

“Abuse and neglect of vulnerable persons must stop. We can all agree on that. The safety of people living in RHCs is a persistent problem,” said Reisha Abolofia, an attorney with the advocacy group Disability Rights Washington. Abolofia wrote a report on the 2016 violations entitled No Excuses: shining a light on abuse and neglect of people with developmental disabilities in Washington’s institutions. “The lack of care in these RHCs results from systemic neglect of people with developmental disabilities,” said Abolofia.

After an alleged rape of a resident by a staff member in November 2016 at The Rainier School, inspectors found the RHC immediately out of compliance and that “the non-compliance posed an immediate jeopardy to resident health and safety.” Cathy McIvor’s sister Maryann Stallone, age 58, was the alleged victim. According to police reports, a staff member walked in and witnessed a nightshift supervisor raping Stallone, who has autism and is non-verbal.

“I’m horrified by it; I’m devastated. I have nightmares sometimes. I wake up with a panic attack picturing that man on top of her, raping her,” said McIvor.

McIvor said the rape was preventable, especially since the staff member, now charged with rape and awaiting trial in the Pierce County Jail, admitted to being accused of sexual assault at The Rainier School a few years prior to the most recent incident.

“When you let a worker with a prior sexual allegation remain on duty in a position with vulnerable adults, it’s not right. It’s not right. It should have never happened. Never,” said McIvor, who is working to move her sister out of Rainier. “Why would they leave him on a floor with vulnerable female adults? On the female ward, at night, on the graveyard shift?”

“It was an appalling situation that none of our residents or any individual should experience. We applaud our staff that intervened when they witnessed the event and are grateful they made immediate notification to law enforcement. The employee in question was immediately terminated,” said Clintsman.

“Disability Rights Washington calls for the convening of a group of individuals with disabilities, their family members, guardians, friends, advocates, and state officials and policymakers. This group should identify the systemic root causes of abuse and neglect of people in our state’s institutions, and then identify and implement solutions. These solutions must ensure that the women and men in these institutions are safe and get the full benefit of the services they deserve,” said Abolofia.

After the failed 2015 surveys, DSHS made significant investments in working to improve systemic issues. KING 5 has learned the agency spent $730,000 on consultants out of California, H&W Independent Solutions, that specialize in disability supports and services. The company’s 20-month contract focused on reviewing negative trends noted by investigators, conducting dozens of training sessions for staff and updating new employee orientation trainings.

Clintsman couldn’t point to a specific reason for repeat violations after so much emphasis and financial investment on retraining staff.

‘I can’t give you the reason it happens (but) we know that it happens. We know that we’re trying to stay ahead of it,” said Clintsman. “We’re continually pushing, pushing, pushing on improving the system and getting people to where they’re supposed to be in providing the services.”

In a 2015/2016 multi-part series “Last of the Institutions,” KING 5 revealed that Washington state lags behind much of the country in its continued institutionalization of citizens with intellectual and developmental disabilities such as autism, Down syndrome and cerebral palsy. Every state on the West Coast has either closed all of their institutions, such as Oregon, or has a concrete plan to do so (California).

Civil rights experts, including the civil division of the U.S. Department of Justice, considers unnecessary institutionalization of people with disabilities a form of unlawful segregation and discrimination as per Title II of the Americans with Disabilities Act.

“There are other options out there for people with developmental disabilities,” said McIvor. “These people are like you and me. They deserve to be in the public eye, just as much as you and I do.”