Hundreds of Washington schools to offer breakfast in class next year

A new law that aims to get more students eating breakfast at the start of the school day will impact 390 Washington schools next year. 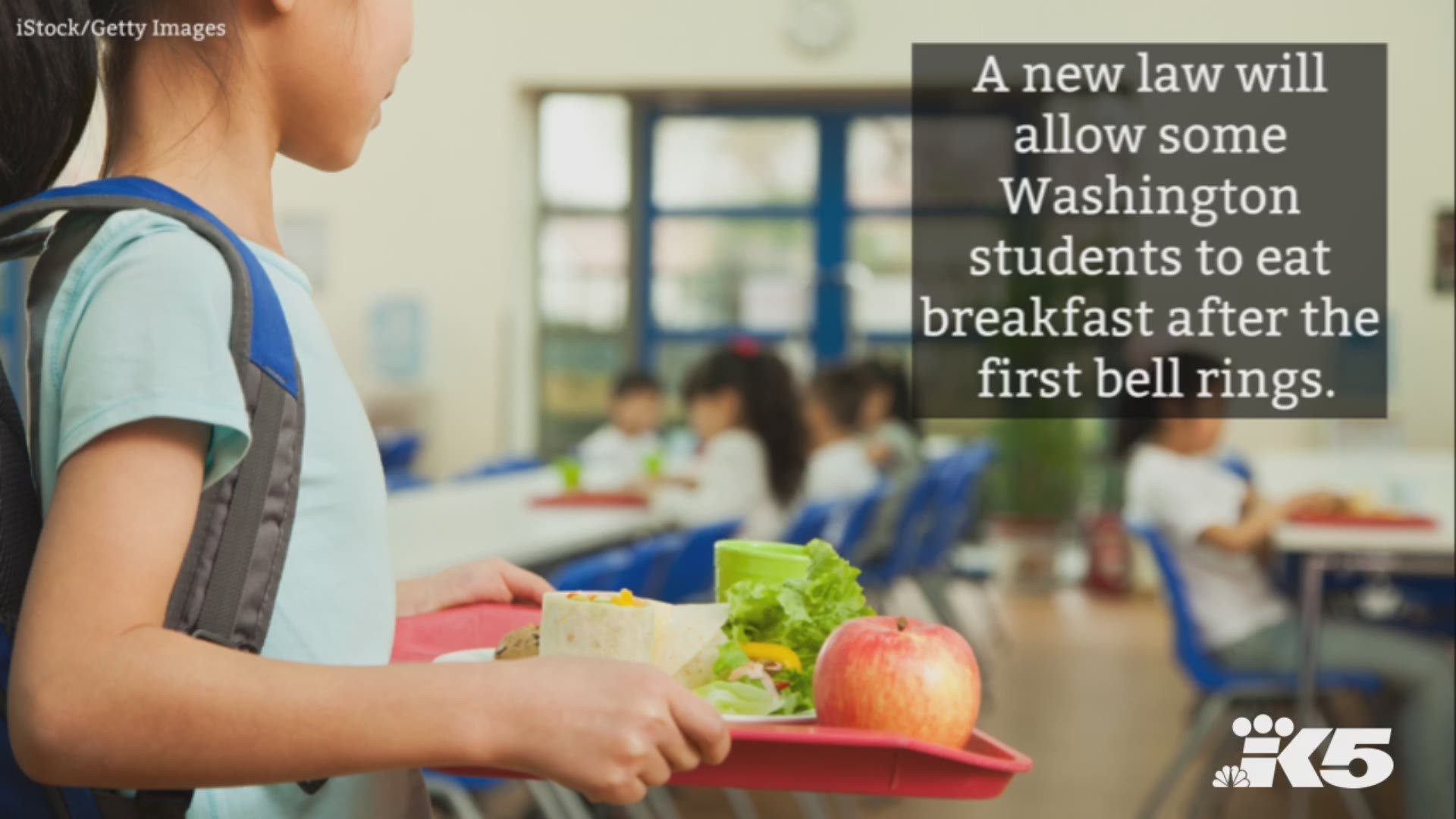 Next year hundreds of Washington schools will offer every student breakfast after the first bell rings, in hopes of boosting the number of students who eat a nutritious meal before class.

“(Teachers) get to do some nutrition education, it brings a sense of community, and I think eating together is always a nice way to start the day,” said Highline Public Schools Nutrition Services Director Lisa Johnson, whose district is one of several across the state that’s already serving breakfast after the school day starts.

The program, called Breakfast After the Bell, stems from a new law Washington lawmakers passed last year that allows students to eat breakfast in the classroom. Schools where over 70 percent of students qualify for free or reduced-price lunch will be required to offer some form of the program, such as offering breakfast to students at their desks, providing grab-and-go breakfast carts, or serving breakfast a second time during a passing period or recess later during the day.

There are 390 schools that will be required to participate in Breakfast After the Bell, according to the Office of Superintendent of Public Instruction.

However, 23 schools were granted exemptions if they have made progress increasing the number of students eating free and reduced-price breakfast relative to free and reduced-price lunch or if they are an alternative school with barriers to implementing the program. Schools can continue to apply for an exemption through the end of April.

Four schools in the Highline school district offer traditional breakfast in the classroom where students eat at their desks while teachers take attendance or run a classroom activity. Other schools serve food on grab-and-go carts, and one has a family-style meal.

“We’re really trying to think out of the box,” said Johnson.

Johnson said that student participation is good, but they’re still trying out new ideas to increase how many students take advantage of breakfast. For example, the district will soon pilot a vending machine in a secondary school where students pay for items by inputting their lunch pin number. Highline also borrowed an idea from Austin, Texas and is piloting a program to let kids pre-order meals that they like.

“So far they’re excited,” Johnson said. “We’ll see if we can expand the trial.”

While the law is targeted at children who qualify for free and reduced-price meals, Johnson said they view it as a benefit for all students. For example, maybe a kid didn’t eat at home because they weren’t hungry or didn’t have time. Breakfast After the Bell offers a second opportunity for that student to eat before class.

There are some additional cost in implementing the program. In Highline schools, some of the extra expense came from recyclable bags purchased for grab-and-go items. The district is also looking at foam containers for cold items in the classroom.

To help with the expense, schools will receive a one-time startup grant from the state. Each school will get $2,000, plus $225 per 100 students.

Part of the new law also requires that breakfasts served as part of the program must meet federal nutrition standards, containing less than 25 percent sugar. In Highline’s case, the food choices will vary based on the model, but some standard items include fresh fruits and vegetables, hard boiled eggs, cereal bars, bagels, and cheese.

“If they’re going to be eating carrots at breakfast, I’m happy about that,” Johnson said with a laugh.