Owning a home is supposed to equal freedom and security, but many of the more than two million homeowners living in community associations in Washington complain they've lost both of those values at the hands of their association boards. 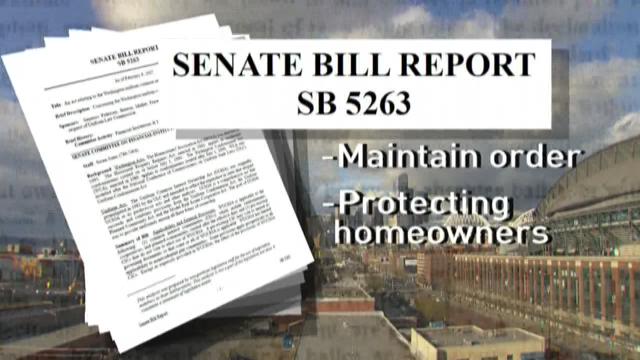 Owning a home is supposed to equal freedom and security, but many of the more than two million homeowners living in community associations in Washington complain they've lost both of those values at the hands of their association boards.

KING5 began looking at the state laws governing community associations for condos, homes, and co-ops after receiving repeated complaints from owners about the association rules and penalties.

"I have no sanctuary," said Raelene Schifano, a homeowner in Kent, who's husband was threatened with a smoking violation.

The only problem was that the Schifanos were out of state on the date the violation supposedly happened.

"We can prove that we were in Utah and they won't even look at the evidence," Schifano said.

KING5 and an attorney helped Schifano prove she was in fact out of state and after several months, the board ultimately dropped the fine.

Joe Mendoza, a homeowner in Vancouver, likens his association leaders to yard police.

"It's oppressive," Mendoza said. "If 25% of your yard is brown you are in violation."

Magnolia homeowner Weldon Nicely was surprised by a roughly $70,000 assessment for upgrades to his condo's exterior.

"I'd say this is one of the most poorly managed processes I have ever encountered," Nicely said.

About 150 people have complained to the Washington Attorney General in two years.

One wrote, "Our HOA is unduly trying to fine us repeatedly."

Another questioned the legality of an HOA imposed curfew for children under 18.

While the AG will collect those grievances, a spokesperson told KING5, "These complaints are not appropriate..." for the AG's "resolution service" because a community association is a private organization, not a business.

"So where do we go when we are stuck?" Schifano asked. "Where do the homeowners go?"

The answer is to negotiate with the HOA or go to court, a potentially pricey proposition.

Lawmakers in Olympia have heard complaints about community associations for years and done nothing.

They were officially warned back in 2007 when a legislative committee report cautioned, "The law is unclear," and suggested greater protections for homeowners.

"This is another one of those situations where if the voters all wanted the same thing it would be really easy to implement," said Washington Sen. Jamie Pedersen, D-Seattle.

Among those competing interests is the Washington Community Associations Institute.

The organization calls itself "Washington's leading advocate for responsible communities."

President Jeremy Stillwell says the association represents homeowners, but many of its members are the lawyers and property managers who make money serving HOA's.

Stillwell cautions lawmakers against greater protections for the individual.

"Legislating on an individual person basis often can do harm to the industry as a whole," Stillwell said.

In a recent CAI survey, the national body for Stillwell's association, 65% of respondents expressed a favorable view of their association.

"It makes everything simple and consistent," Schneider said.

In Washington, that leaves more than 700,000 residents who could have a negative or at best neutral view of their association.

"So a huge percentage of residents live in one of these communities, and it is a big deal if they are not working as they are supposed to be," Pedersen said.

Pedersen is proposing a law he hopes will balance the stakes, giving associations the authority they need to maintain order but also protect homeowners from exorbitant fines and arbitrary rules.

"If you make it too dangerous to enforce the rules, the likelihood is the rules won't get enforced at all," Pedersen said.

His proposal would also bring HOA's, condo associations, and co-op's under the same set of rules. Currently, they are governed by different statutes.

"It's very important to rebuild the trust of the community and the board," Nicely said.

While some homeowners are optimistic, others who have been stung by fees or fickle rules, argue the proposed law wouldn't do enough to limit the powers of the board.

"There is no oversight of HOA's," Mendoza said.

"There has to be some type of governance to stop the bullying and the harassment," Schifano said.

What's yet to be seen is whether this legislation will be the first step toward helping homeowners reclaim that sense of sanctuary some say community associations have cost them.

Pedersen said he will introduce the proposed legislation in the upcoming legislative session this January.

He cautions that if it passes, the law would only apply to new communities.

Pre-existing communities would have to opt in or continue to operate under the statutes in place at the time of their formation.

Attorneys who represent homeowners and realtors tell KING5 the current set of circumstances makes it incredibly important potential buyers of properties in community associations take the time to carefully read the documents outlining the association rules, regulations, and finances provided ahead of the sale and consider whether they can live with the rules and potential risks.