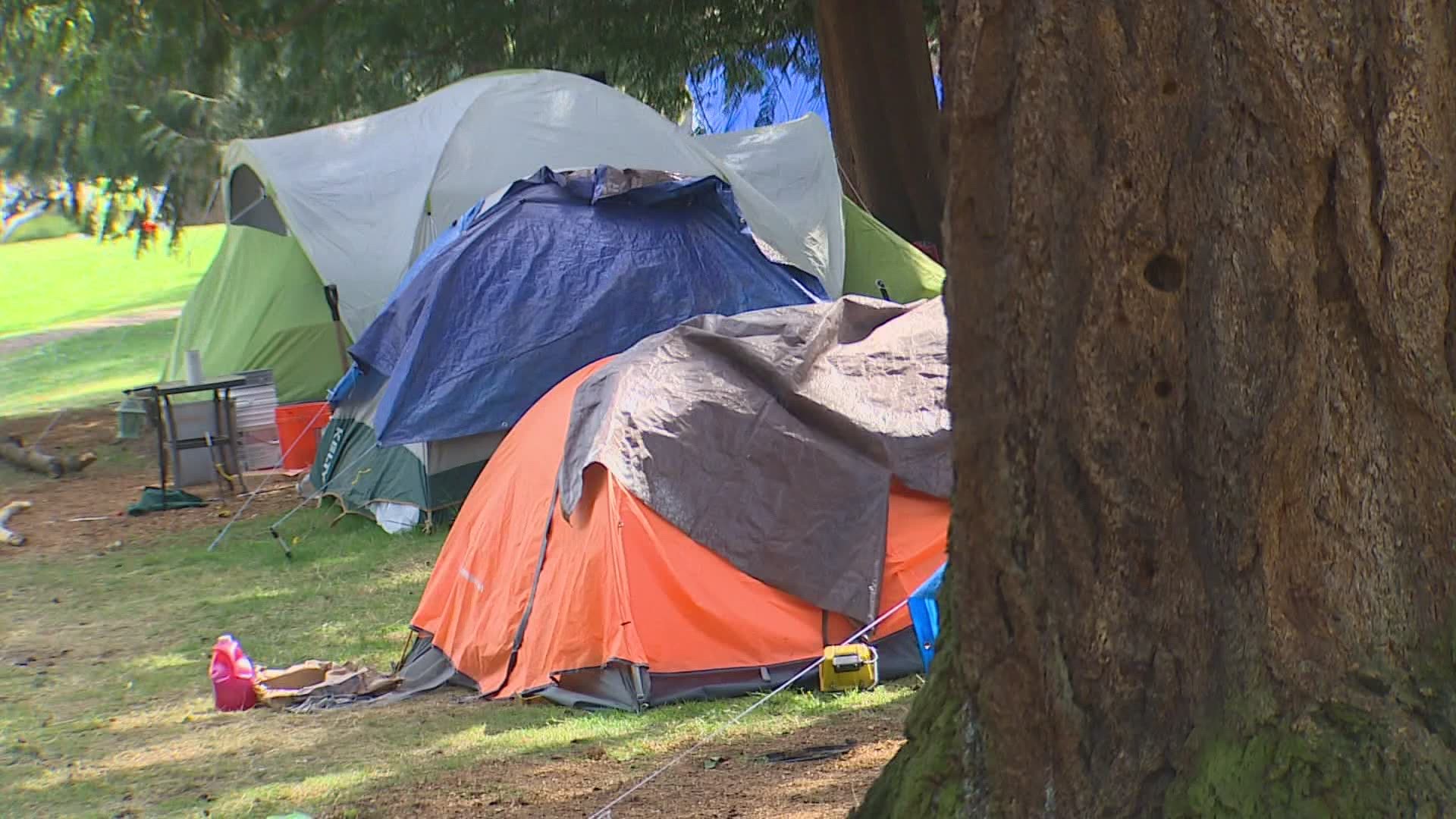 SEATTLE — A homeless encampment on Seattle school property has quickly become a flashpoint in the city mayoral race.

On Friday, former Seattle City Council President Bruce Harrell traveled to the site for a campaign speech, only to be confronted by angry neighbors who blamed him in part for allowing the situation to fester.

The encampment of roughly 30 to 40 tents is wedged in a spot owned by Seattle Public Schools (SPS) and directly below Broadview Thomson K-8 school. Bitter Lake, a housing development and a public park is on the other side. Residents, and teachers at the school, have expressed concerns about safety, citing recent events both on campus and in the neighborhood.

"This is the crisis of the day," shouted Harrell at a Friday press conference, "At the end of the day, it is the mayor's job to address this."

Yet, current Seattle Mayor Jenny Durkan has said for weeks that the school district, which owns the property, has declined assistance and hasn't requested the removal of the tents. Her office reiterated the point in a statement on Friday.

"We have and will continue to work with the SPS leadership in providing technical assistance so the school district can remove the encampment on their property," wrote Durkan's Chief of Staff Stephanie Formas in an email.

Durkan's office said the mayor believed the school district should have cleared the encampment several months ago, at a similar time as the city was removing the encampment at Miller Playfield. The Washington State Department of Transportation and private businesses routinely remove encampments from their own properties and contract with outreach providers who offer services, the mayor's office said.

In a statement, SPS said it is ill-equipped to provide services to people who live in the encampment or to stage a removal.

“While our goal is to clear the property of all unauthorized camping as soon as possible, we do not have the expertise or resources to do so effectively. Moreover, a “sweep” of the encampment (as some community members have urged) would only serve to dislocate the campers into other areas of the community, likely including the adjacent city park," the district said.

SPS said it is currently working on a way to offer services to residents of the encampment.

"We are committed to finding a more durable solution: one that offers some form of shelter along with transitional services. This will take time, but we are encouraged by the offers of support we are receiving from valued partners and social service providers. The school board directors have also been tirelessly active in identifying solutions and possible partners," the school district said.

"I will take ownership of the issue," Harrell said, who sidestepped a question about a removal of the encampment by saying "we have to get them services, we have to get them housing." Harrell would later say, "We have the resources in this region to house them immediately".

The campaign speech was interrupted by members of the neighborhood who confronted Harrell about the lack of action by anyone, and who grumbled that they've seen little in the way of any services provided to the people living in the encampment.

"We are enabling people to break the law," shouted one.

"The kids go between here and there," Tom Hollowed told Harrell, frustrated that an access point to the park was cut off by the encampment. "This is a joint-use facility."

"I don't even feel safe to go out into my garden, and weed anymore," added Annie Geer. "There are needles and human waste being dumped into the lake."

Another neighbor, Kristi Lyn Reddy, got into a heated argument with Harrell, suggesting that weapons have been seen in the encampment and that the bar was set lower for the unsheltered than the neighboring kids in school. "So if a student wants to bring an air gun to school to defend themselves, that would somehow be okay to break that law," she quizzed Harrell.

Other Seattle mayoral candidates teed off on the issue Friday, after learning about the Harrell campaign stop.

Jessyn Farrell said, "Mayor Durkan should stop passing the buck on the homelessness crisis. Has she been in our public schools lately? SPS is still struggling with the multiple traumas of the pandemic - food insecurity, remote learning, students' mental health challenges, and students missing school because they need to watch their siblings while their parents work. Our kids need leaders who are looking out for them, not just laying blame."

Andrew Grant Houston suggested building hundreds of tiny homes will help shelter people on the site, and said through a spokesperson, "Bruce spoke today about 'months of finger-pointing,' but spent years on City Council with the direct ability to develop and implement a 'clear and transparent plan' and failed to do so. Career politicians like Bruce were there when we declared homelessness an emergency and proceeded to sit by for years as the issue got worse."

Candidate and current Deputy Mayor Casey Sixkiller told KING 5, "The situation outside Broadview Thomson Elementary reflects a failure in leadership by the Seattle School Board and the system that former City Council President Harrell helped to create. We need to spend less time on semantics and more time on solutions so that students can return to the classroom safely. Instead, just days away from the end of the school year Seattle Public Schools continues to point fingers rather than follow the blueprint for success that was shared with them months ago."

A spokesperson from current Seattle City Council President and mayoral candidate Lorena Gonzalez wrote "As a recent Councilmember, who was in city government for over a decade, Bruce should know that photo ops exploiting the suffering of others do not solve anyone’s problems. Encampments are just the visible tip of the iceberg that is poverty, wage inequality, corporate welfare, and skyrocketing housing costs. Instead of holding meaningless photo ops or proposing to build a dashboard to study homelessness, Lorena is working to secure the resources and broad cooperation necessary to address this humanitarian crisis."

Candidate Lance Randall wrote, "I am glad Bruce is finally acknowledging the problem, but I am disappointed that he did not take action to deal with the issue when he was the President of the City Council. Press conferences do not solve problems. Action does."