The cycle of camp, sweep, repeat continues in Bellingham. 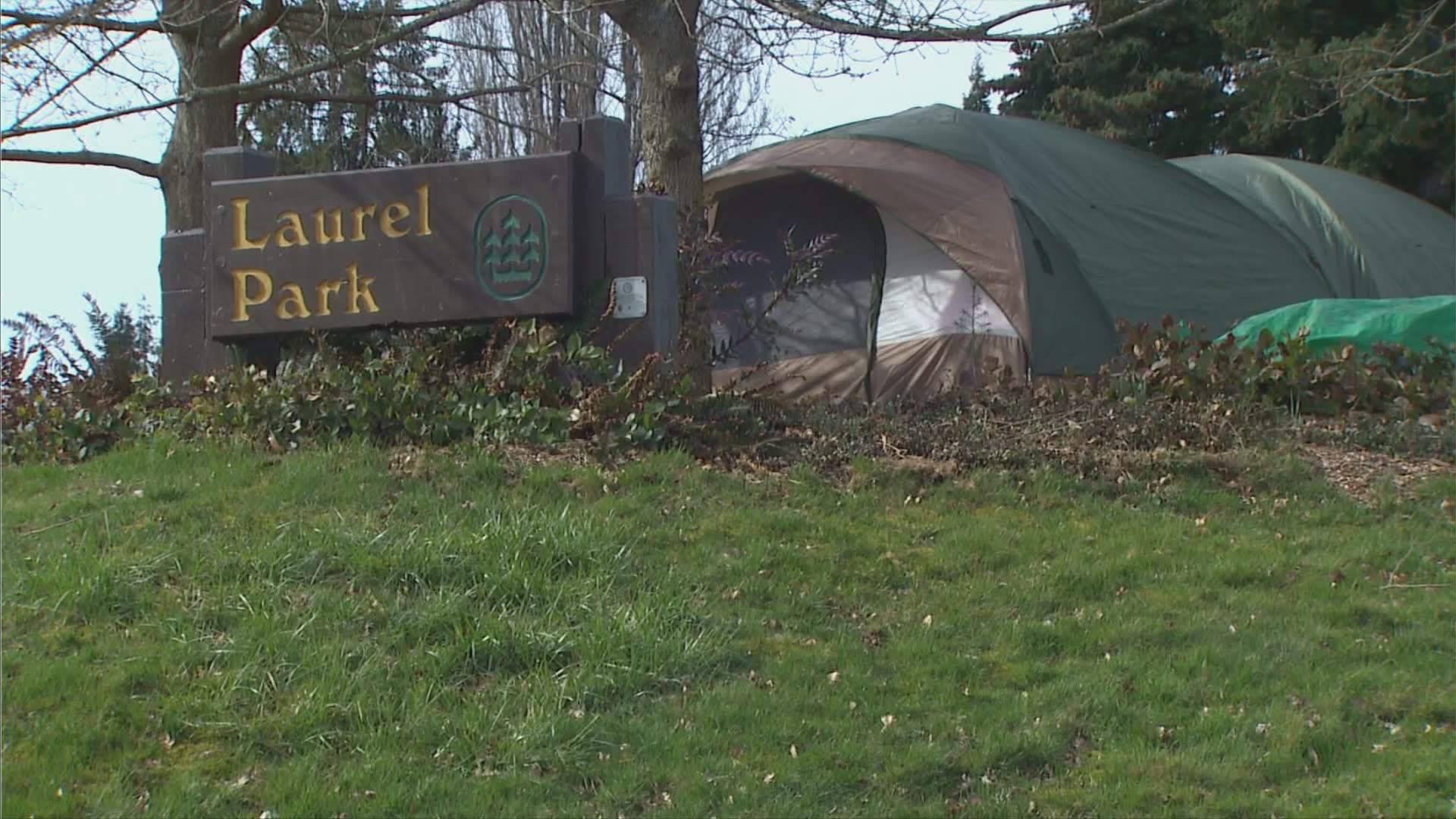 BELLINGHAM, Wash. — The City of Bellingham cleaned up a homeless encampment located at Frank Geri Field near the Civic Athletic Complex Tuesday morning. But even as people were swept out of the camp, they were setting up another less than two miles away.

The camp had been at Civic Athletic Complex since it moved from Bellingham City Hall in February.

It has been a scene of ongoing trouble. Earlier this month a large fire broke out at the camp.

Around the same time, an 11-year-old girl was groped by one of the homeless as she made the short walk to her waiting mother after finishing a gymnastics class.

"We just feel like the criminal element has hidden out here to cause problems," said Kent Charette, owner of the gymnastics academy. "For the safety of our families and our kids we feel good that it's finally moving."

David McGarrity, who lives near Laurel Park, said he isn't thrilled with the new neighbors.

"The camps are dangerous," he said. "They had trouble at City Hall then over at the baseball field. Now they're coming here. They just keep pushing the problem down the road and we're spending money to do it."

The current camp is the continuation of a protest that started in November outside Bellingham City Hall. That protest saw arsons, assaults even a hatchet attack that put one person in the hospital.

Bellingham Mayor Seth Fleetwood said people at the new camp have been told to leave Laurel Park by this Friday or face another sweep.

After the problems at the previous two camps, Fleetwood had a warning for people who lived near Laurel Park.

The city has put about a dozen campers into treatment over the past week, and housing for about 40 more people is on the way in a couple months.

Fleetwood added that city officials met with demonstrators over the course of 15 hours earlier this year to work out an agreement.

The city offered to provide 25 new tiny homes, along with additional shelter as well as social workers to give campers access to mental health and addiction treatment.

"They rejected it all," said Fleetwood.

For now, the city and its homeless appear stuck in a cycle of camp, sweep, repeat.

"They've moved to another site and we're gonna deal with that," said Fleetwood. "We're gonna continue doing the hard work of standing up permitted sites. It's not gonna happen overnight. Unfortunately, that's the reality of it."

Demonstrators have been demanding better housing for the homeless.

Bellingham officials on Tuesday morning said the city performed outreach to the estimated 25 to 30 people living at the encampment in the week leading up to the cleanup.

Advocates of the camp said they're looking to help residents pack and move their belongings to a new site. BOP Mutual Aid has been collecting donations for the encampment.

"Our community is once again threatened with a violent removal from their shelters," BOP Mutual Aid wrote in a Facebook post about the cleanup.

However, outreach groups argued there is enough room in shelters for every person living at the camp.

Lighthouse Mission Ministries said it has 40 available beds at its low barrier shelter called Base Camp. The center sent teams to the camp last week, but Executive Director Hans Erchinger-Davis said the teams struggled to get people to take their offer.

"They don't want to come in and access services, especially at our Base Camp, the consensus is from our staff it's because we don't allow people to smoke weed," said Erchinger-Davis.

The BOP Mutual Aid group has asked for donations of everything from sleeping bags to marijuana. Erchinger-Davis said while this might be well-intentioned, it's allowing people to avoid getting help.

Bellingham Public Works and Parks Departments are leading the clean-up. The city hopes things are peaceful but said it will call in law enforcement if there’s any violence. #KING5 pic.twitter.com/4w2F8yWy8X

"People don't want to feel the pain of the devastated life that they have," said Erchinger-Davis. "So, anything that takes away that pain they're going to choose before doing the hard work of restoring relationships with family, and the hard work of addiction recovery, the hard work of building yourself up so you're marketable to get a job again."

The city said the camp at Geri Field is home to "part of the most difficult-to-serve, chronic homeless population, requiring special care for their complex and significant challenges such as addiction, aggression, and mental health issues."

Erchinger-Davis said as a low barrier facility, Base Camp, which is located at 1530 Cornwall Ave. in Bellingham, accepts anyone needing assistance. However, the shelter will turn people away who incite violence. Some people at the camp have been kicked out of the shelter because of violence and do not want to return. 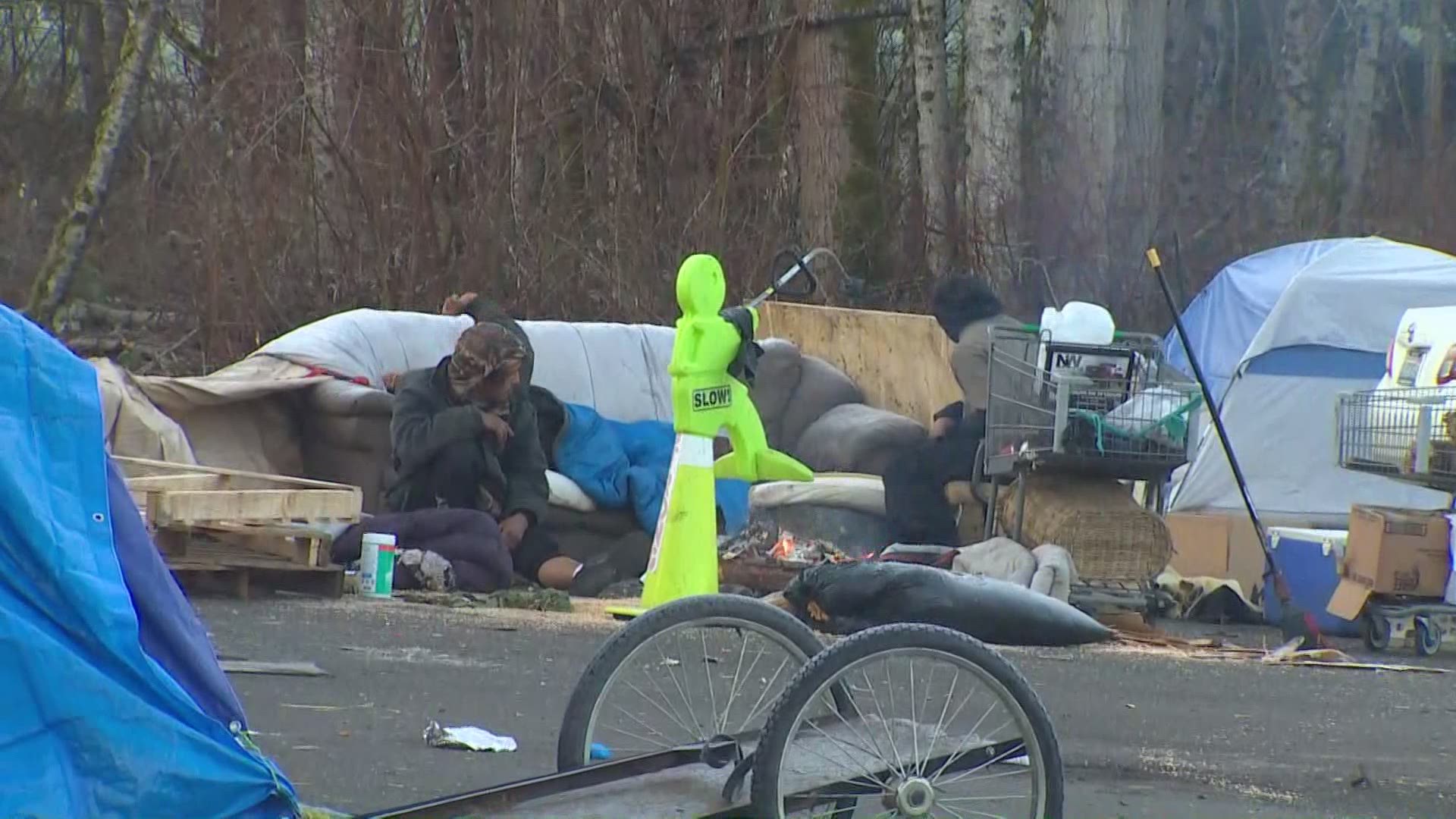