The unauthorized homeless encampment at the base of Broadview Thomson K-8 is concerning neighbors, who say the school district and city are not doing enough. 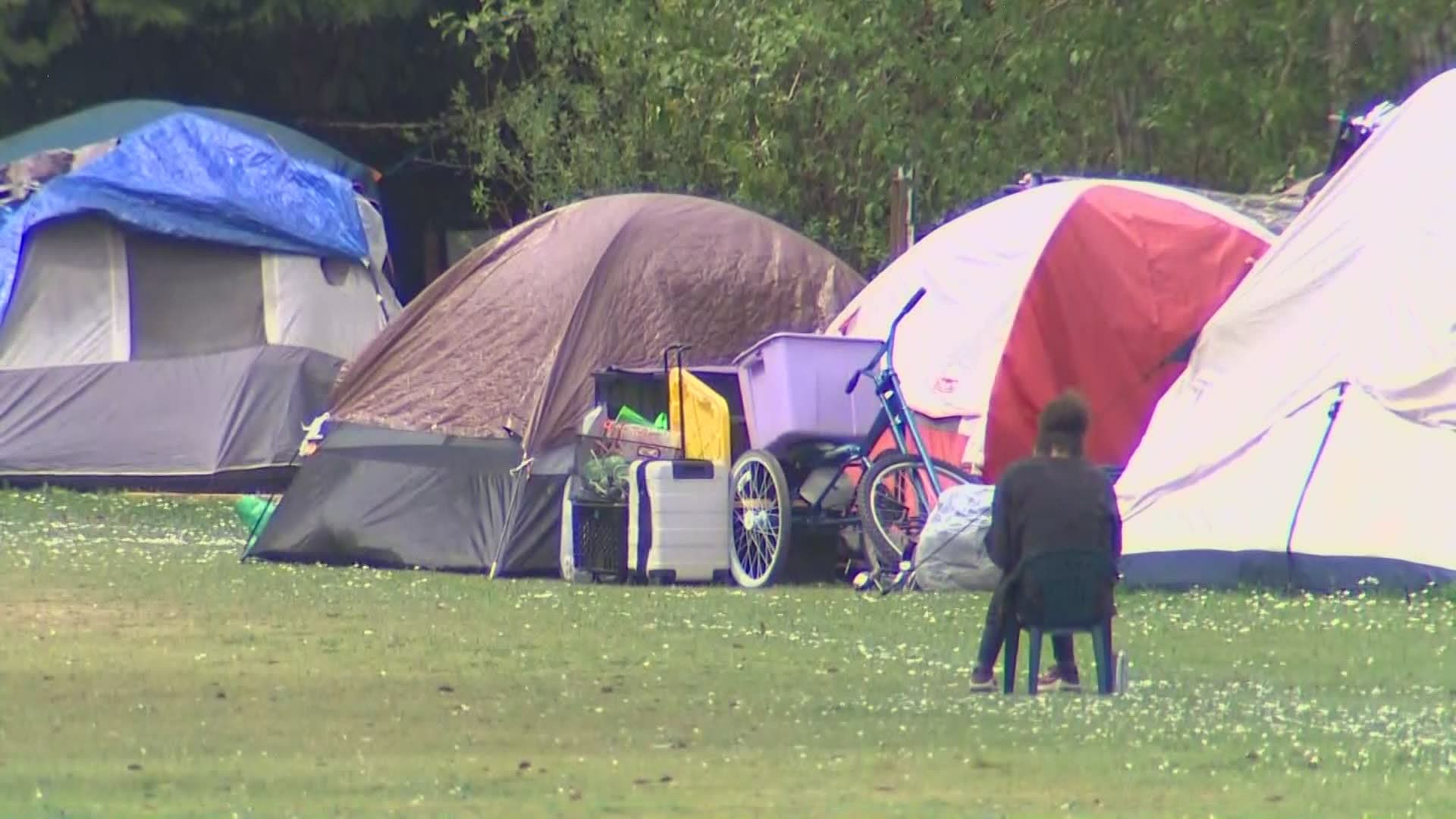 SEATTLE — Some residents in North Seattle are frustrated by the impasse over how to handle a growing homeless camp on school property, and are now asking elected leaders to come up with a plan.

It's not hard to spot it on Bitter Lake. If you were to look just beyond the sign which says, "No Camping," you'll see nearly four dozen tents.

It's an unauthorized homeless encampment, with a water view, and one, which sits on Seattle Public Schools (SPS) property.

"I'm exhausted, it's an exhausting situation," said Paul Riemann, about the encampment that has sprung up adjacent to a residential subdivision.

He was one of a handful of homeowners who, unprompted, approached KING 5 this week as students returned to school, and asked why the city and the district don't appear to be doing anything to change the situation.

That's because of a situation across town, where the city evicted a similar camp at Miller Park, which is connected to Meany Middle School, and a community center. It was done before students returned physically to class at the school on Monday.

The Bitter Lake encampment is at the base of Broadview Thomson K-8, and has been used as an access point to the school in the past. Yet, there has been no similar action taken like what was done with the Meany Middle School camp.

"After putting up with this for nine months, and it has doubled, tripled in size, it's overwhelming and exhausting and after all that to have the district essentially endorse it and provide safe haven for it that was a little hard for us," said Reimann.

It's not just for one reason, either. He said, at first, neighbors brought people coats and bedding, and there was an attempt to provide social services by local providers. But as time has worn on, those visits have dwindled, and neighbors said safety concerns have risen.

Seattle police were unable Friday to provide quantitative data to prove that claim, but the Seattle Fire Department (SFD) does show that they've been called to the spot numerous times in recent months.

An SFD analysis provided to KING 5 showed, "Between July 22, 2020 and April 22, 2021, the Seattle Fire Department sent units to respond to the general area of the encampment next to Broadview Thomson School at least 13 times. Of these responses, eight were for illegal burns or tent fires and five were for Basic Life Support medical responses (minor injuries). Additionally, there were at least two transfers to other agencies (AMR/SPD) and at least three occasions where dispatch was advised of an incident at the encampment (likely an illegal burn)."

SPS reinforced a fence on Monday, to block access to or from the encampment, and said it is forcing students to exit in the opposite direction, onto Greenwood, to avoid the camp.

Seattle Mayor Jenny Durkan painted the picture this week that the district has declined help with the situation, even if the city is better positioned to help people transition to housing.

"I've been by the camp myself," said Durkan in an interview with KING 5, "Two things I think are really important is the vast majority of the encampment is on Seattle Public School property. It is their obligation and their responsibility to determine how they want to deal with it. The school board made it very clear that they want to make sure that they bring every person inside and not move people. Two school board members said that they objected to what they called sweeps. So we've offered them assistance in terms of technical assistance on how to do that. It takes a lot for a government to stand up with the City of Seattle is done. But it is the school board's responsibility to maintain their premises in their school yards, so that they're safe for students and safe for families."

SPS issued a public statement to families this week, which read in part, "Homelessness has been a crisis in our city for years, and it has only been exacerbated by COVID-19. We acknowledge community concerns about the encampment of individuals experiencing homelessness living near Broadview-Thomson K-8 school. We also acknowledge community requests to support compassionate solutions."

The district continued, "Simply removing them from district property won’t result in a permanent solution for the area. The district will continue to work in partnership with the city, building staff, and families to identify and implement long-term solutions that prioritize the well-being of our school community and care for unhoused Seattle residents."

Yet, Reimann and his neighbors are not convinced.

"What we're fearing is mid-June coming and the district disappearing for three months, and we have to shoulder this for another three months after dealing with it for nine months to date," he said, "We really need a plan, we need some sort of management from the school district. We have very little confidence they're managing it at all." 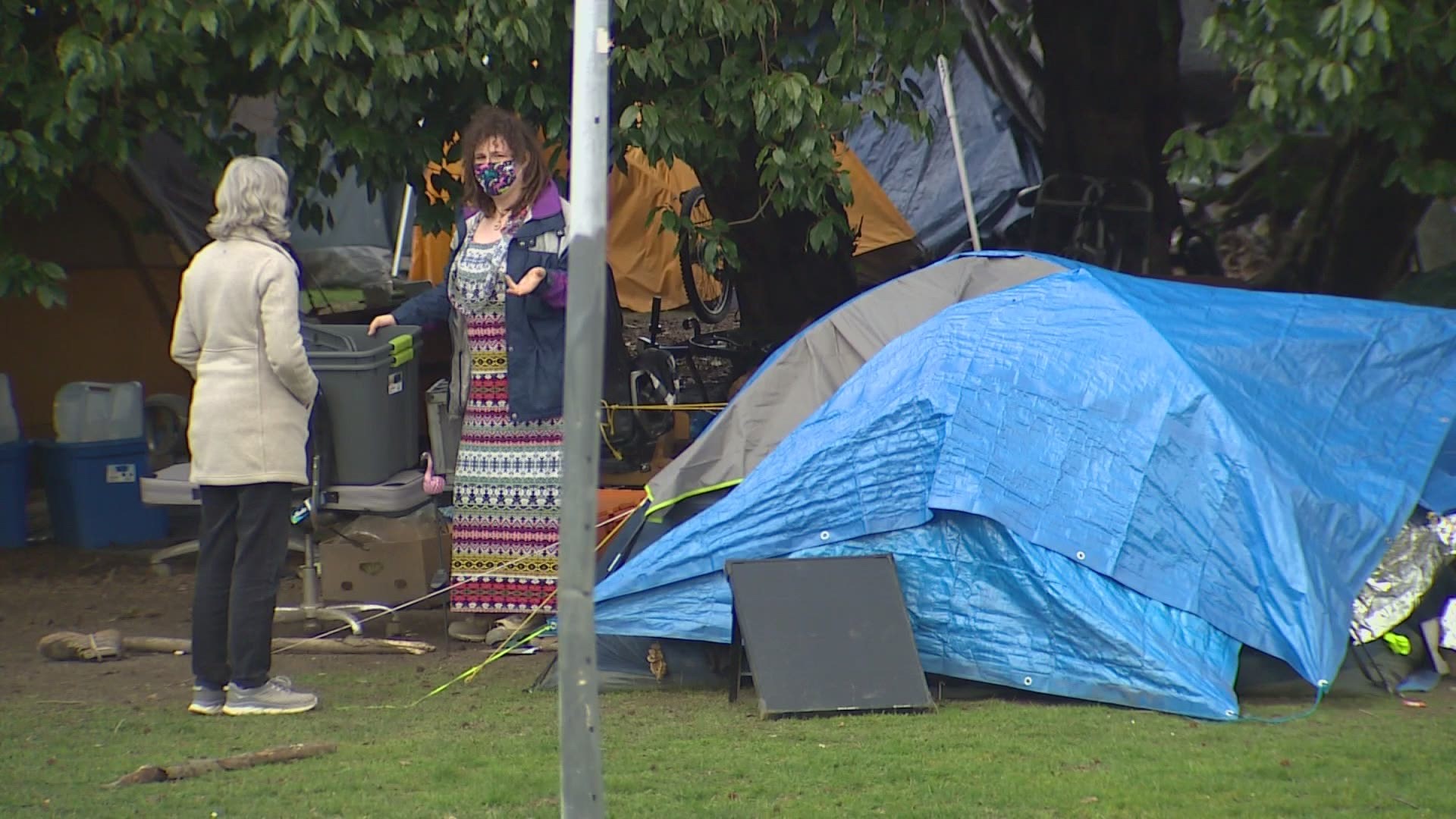