A three-story story house being built in Bellingham is now a staging ground for activists and politicians who want it to be easier for farmers to grow hemp in Washington. 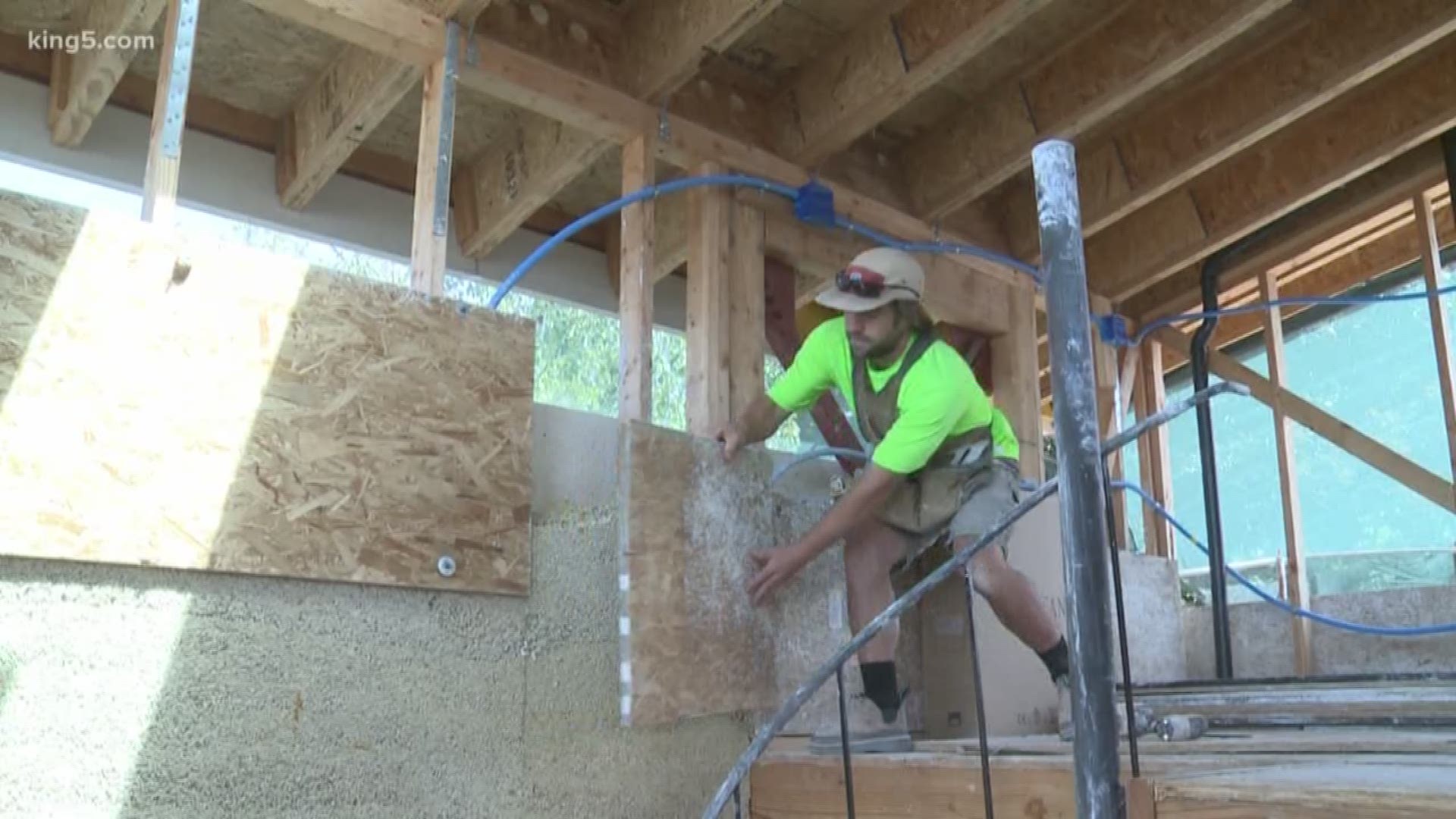 A three-story house is under construction in Bellingham, and crews are using hemp to build it.

"I needed to renovate my house and I'm concerned about the environment and healthy living. About five years ago, I started to investigate and I learned about 'hempcrete.' It's insulating, it moderates humidity, it's renewable, it's recyclable, it's regenerative," said homeowner Pam Bosch.

Bosch’s house, the so-called Highland Hemp House, has become a staging ground for hemp activists and lawmakers who want to cut the red tape surrounding the building material.

"I view this as my legacy project and my gift to my grandchildren and to all of the children of the future," said Bosch.

In 2016, the Washington Legislature approved the Industrial Hemp Research Pilot. Currently, hemp can only be grown as an agricultural product for research in Washington. In states where recreational marijuana is not legal, it’s actually much easier to grow hemp. There has been much concern that the plant could pollinate with its higher-THC sister plants, since Washington is covered with grow operations. The rules do not allow any hemp farms within 4 miles of a recreational marijuana farm. Farmers also cannot transport seed over state lines or grow hemp for human consumption.

Hemp and marijuana are both part of the cannabis family, but the chemical makeup of hemp contains less than .3% THC.

VanderVeen owns a crop and dairy farm in Whatcom County. She and others want the state legislature to help farmers grow hemp with fewer restrictions.

Hemp is often touted as a more environmentally sustainable building product because of its usefulness for phytoremediation. Phytoremediation is the use of plants for removal of contaminants in soils, sludges, surface water, and groundwater. Hemp grows fast, has deep roots and is not negatively impacted by the toxins it accumulates from the soil and air.

Many believe hemp could serve as a valuable barrier to prevent animal waste run-off into waterways in heavy agricultural areas like Whatcom County. It also serves as an option for farmers to diversify their crops and offers new economic opportunity for other small businesses.

"I look at it from the agriculture standpoint. I've been working at the state level to make sure we can grow hemp here in Washington state. I want our farmers to be able to have a product to grow," said Rep. Vincent Buys, R-42.

"I think hemp is totally bi-partisan. It is an agricultural product and something we should focus on. It's sustainable, it's good for the earth," said Bellingham City Councilmember Pinky Vargas, who is a Democrat and also running for state Senate against Sen. Doug Eriksen.

What would the state Legislature need to do to make this a reality?

"I think one of the biggest things is one of the agencies have been doing through the rulemaking process. At the federal level, I think we'll see some legislation coming down that will really untie our hands at the local and state level," said Buys.

"We've been importing hemp from Canada for years and years, and that is economic money that we have been missing out on," said Vargas.

Right now, hemp has to be imported to Washington, which drives up cost because the state doesn’t produce enough to drive mechanization.

Hemp farmers are currently required to obtain a license to grow the plant. Last year was the first growing season, and seven licenses were issued. So far this year, no licenses have been issued, but there are currently three applications awaiting approval.