Worst week for Hanford workers since May

70 people have been exposed to suspected vapors in a two day period — the largest number of workers since May 5. 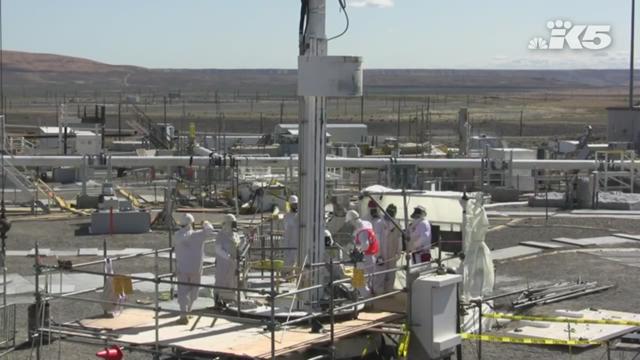 Three more Hanford workers were transported to the onsite medical clinic Thursday after reporting a strong ammonia-like smell, consistent with a decades-old problem at the nuclear facility of exposure to harmful chemical vapors.

This comes just a day after six other employees sought medical evaluation for a similar experience. All nine workers were outside the nuclear facility’s zone requiring respiratory protection. With the latest event, 70 people have been exposed to suspected chemical vapors venting from underground waste tanks at the site since April.

“Three Hanford workers—two expressing symptoms—underwent precautionary medical evaluation and were released to return to work after reporting odors this afternoon,” wrote Rob Roxburgh, a spokesperson for the government contractor in charge of the tanks, in a statement to KING. “The workers reported an ammonia-like smell outside of a tank farm in an area that does not require use of a supplied-air respirator.”

“The refusal of Hanford management to take precautionary measures to protect workers outside the fence continues to put them at unconscionable risk,” said Tom Carpenter, Executive Director of the citizen watchdog group Hanford Challenge, which is in the middle of a legal battle with Hanford over vapors.

This is the largest number of workers exposed to suspected vapors in a two-day period since May 5.

The new exposures come the same week that a national audience learned about Hanford’s ongoing vapor problem. On Tuesday morning NBC’s investigative correspondent Ronan Farrow aired a seven-minute report on The Today Show about the chemical hazards at Hanford and the government’s attempts to deny the problem exists.

The U.S. Department of Energy, which operates Hanford, and its contractor Washington River Protection Solutions (WRPS) are under intense scrutiny over their vapor program as they head to trial over their alleged failure to protect workers. In 2015 Washington State Attorney General Bob Ferguson, the advocacy group Hanford Challenge, and local 598 union all filed suit against the Dept. of Energy and WRPS for failing to follow federal and state law requiring them to protect the workforce from known hazards. In response, the defendants have argued their safeguards are already appropriate, they’ve never found evidence of chemical vapors strong enough to be dangerous, and that there is no proof anyone has ever contracted a serious illness from getting exposed to vapors at Hanford.

At the same time, dozens of workers, many of whom have been featured in a three-year ongoing investigation by KING 5, report debilitating symptoms and illnesses brought on after chemical exposures. Some of the illnesses include toxic encephalopathy (dementia), reactive airway disease, COPD, and painful nerve damage.

In addition, a slew of expert reports dating back to the early 1990’s, including a $2 million study commissioned by the U.S. Department of Energy in 2014 have found Hanford’s vapor protocols lacking and that a link does exist between even short vapor exposures and adverse health effects.

“The people running Hanford need to have a moral compass that directs them in the right way, as human beings, to do the right thing to protect these people,” said former Hanford employee Mike Geffre who retired after 26 years at the site. “They’re trying to save money and save face. They’re standing behind their old position that there’s no problem. That’s absurd. They need to accept the fact that they made mistakes and get over it.”

After the incident Thursday, WRPS said in a statement that their measurements in the area did not show levels that would be harmful to humans. This is consistent with the contractor’s findings after every such event since KING started revealing vapor issues in 2014.

“Industrial hygiene technicians responded and no elevated readings were identified, including ammonia,” said Roxburgh of WRPS.

“It hurts to hear about what’s happening. It breaks my heart for my former co-workers. But I don’t miss being a guinea pig,” said Geffre.