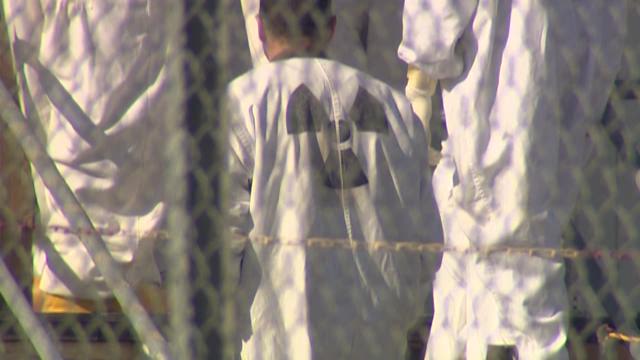 On June 8 approximately 350 Hanford workers were ordered to “take cover” after alarms designed to detect elevated levels of airborne radioactive contamination went off. It was quickly determined that radioactive particles had been swept out of a containment zone at the plutonium finishing plant (PFP) demolition site. The work is considered the most hazardous demolition project on the entire nuclear reservation.

At the time Hanford officials called the safety measure “precautionary.” Officials from the U.S. Dept. of Energy, which owns Hanford, and the contractor in charge of the demolition, CH2M Hill, downplayed the seriousness of the event with statements including, it appeared “workers were not at risk”, “(the alarm went off) in an area where contamination is expected” and there was “no evidence radioactive particles had been inhaled” by anyone.

The KING 5 Investigators have discovered those statements are incorrect. An internal CH2M Hill email sent to their employees on July 21 was obtained by KING. It states that 301 (test kits) have been issued to employees and of the first 65 workers tested, a “small number of employees” showed positive results for “internal exposures” (by radioactive plutonium).

Sources tell KING the “small number of employees” is twelve. Twelve people out of 65 is 20 percent. Still outstanding are 236 tests. A communication specialist with CH2M Hill sent a statement that more positive results are expected. “We expect additional positive results because analytical tests like a bioassay can detect radiological contamination at levels far lower than what field monitoring can detect,” said Destry Henderson of CH2M Hill Plateau Remediation Company.

Several veteran Hanford workers were surprised by the number of people with internal contamination from a single event.

“I’ve worked there for 27 years and I’ve never seen this many people contaminated internally,” said one employee with radiation expertise who did not want to be identified.

“When I first heard the number I couldn’t believe it because it’s just something that the Hanford workers take pride in - that they don’t get contaminated and this doesn’t happen. They work very hard at not getting contaminated and especially getting an internal contamination. So, when I heard that many, that’s just amazing,” said Mike Geffre who retired from Hanford after working at the site for 26 years.

“In 36 years I’ve not seen this many people with internal exposure,” said another Hanford worker who wished to remain anonymous. “It’s a monstrous deal. And the workers know it, but they don’t want to say anything. They’re afraid.”

Todd Southerland, CH2M Hill’s PFP Safety, Health and RadCon Director wrote in the July 21 email that the tests showed a very small dose of radiation had been detected in the employees, “a dose of less than or equal to 1 millirem,” wrote Southerland. “At the end of 50 years, the person with a dose of 1 millirem would receive a dose equivalent to less than a tenth of a standard chest x-ray. A standard chest x-ray is about 10 millirem.”

“If you look at what the exposure was it equates to about approximately what a chest x-ray would be or a little less than that or a flight to Washington DC,” said Doug Shoop, the U.S. Dept. of Energy’s Richland Operations Office manager.

Several Hanford workers and four radiation experts consulted by KING 5 said the messaging from the contractor and the DOE is “misleading” and doesn’t explain the actual danger to employees.

“There’s no safe amount of plutonium you can inhale or ingest,” said Dr. Marco Kaltofen of the Nuclear Science and Engineering Program, Dept. of Physics, Worcester Polytechnic Institute. “If you fly from Seattle to DC, you’re in the air for 6 hours and you’re done. With plutonium, the exposure is in your body for days, months or even years. A millionth of a gram of plutonium has a measurable risk of causing a lethal lung cancer,” said Kaltofen.

Hanford workers said they are not concerned about the small dose of radiation detected, but about the contamination inside the body from plutonium. All radiation is not created equal. Radiation from an x-ray, air flight or a microwave are different and far less dangerous types than the kind emitted by plutonium inside the body. Unlike x-rays, air travel or microwaves, plutonium emits alpha radiation, which is the most destructive type to inhale or ingest.

“Alpha particles damage or destroy DNA and can cause cancer,” said Kaltofen.

“If I get a chest x-ray or CT scan, that’s a different type of radiation,” said Dr. Erica Liebelt, Medical and Executive Director of the Washington Poison Center. “These people’s risk could be quite low because that number was very very small. (But) you have concerns about (alpha) radiation disrupting the cells and causing genetic disruption in the cells and cellular damage. And that’s what causes the increased risk for cancers in three organs: lungs, liver, and bone,” said Liebelt, who is also a board certified toxicologist.

Medical experts said nasal smears are one of the best diagnostic procedures to check for contamination. In the June incident, the contractor did not administer those tests. When KING 5 asked CH2M Hill why they skipped that step, the spokesperson did not answer the question.

With a minimum of two accidents involving the spread of radioactive plutonium at the demolition project that began in November, site workers who spoke with KING are worried that appropriate controls are not in place to keep them safe.

“They should never have this many people exposed, and what happens the next time around?” said a veteran worker, who did not want to be identified for fear of retaliation. “A lot of people are concerned that they will have another contamination spread and it may cause damage to the environment and to people.”

CH2M Hill said they have increased safety measures to prevent another accident.

“After June 8th, we worked with the employees involved, technical staff, radiological experts, engineers and others to evaluate the incident and identify actions that can be taken to reduce the likelihood of recurrence, including: adding additional dust suppression capability; implementing negative ventilation on the canyon during demolition; and reducing the proximity of nearby employees to the canyon,” said Henderson.

It is not clear why many of the workers near the demolition project on June 8 were not wearing full respiratory protection. Some long-time workers said utilizing the gear is expensive, slows down the work and could jeopardize CH2M Hill finishing the demolition on time. The contractor is under pressure to finish by Sept. 30 as per a legally binding agreement with the state of Washington.

“It’s money in their pockets and a feather in their cap to get (the job) done. So, they’ll get the done, but at what expense?” said one experienced Hanford worker who did not want to be identified.

The CH2M Hill statement sent to KING underscored their position that workers face little risk from the exposures.

“The results received show a very low internal contamination dose that is significantly less than a typical chest x-ray,” wrote Henderson. “During the event, field monitoring showed levels of contamination not considered harmful; we expect any future positive (tests) also not to be harmful.”

“It’s misleading and that’s such bull s***. That just pisses me off that they even imply that. It’s not like getting an x-ray,” said Geffre. “It’s an insult to the people that work there. What did you think all those years of (radiation) training was for? For me to be stupid now? Yeah, it makes me mad.”

For 40 years plutonium buttons for nuclear warheads were manufactured inside the PFP.

Hanford is not a nuclear power plant. It is a 586 square mile federally owned decommissioned nuclear weapons facility near Richland. From 1943 to 1988 workers produced plutonium for the secret Manhattan Project and then to bolster the country’s nuclear stockpile throughout the Cold War. Since 1988, Hanford has been a nuclear clean up site only.

Hanford is considered this most contaminated place in the Western Hemisphere.