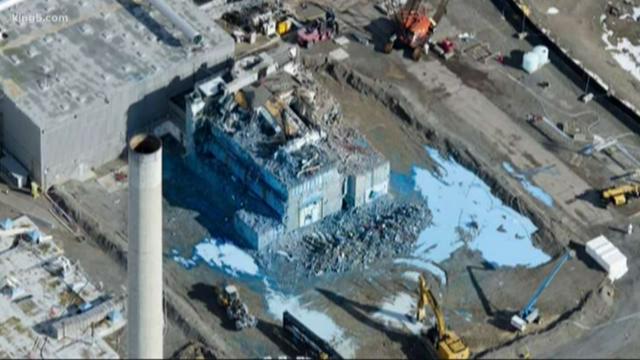 Work has been halted at Hanford’s most dangerous cleanup project – the demolition of the Plutonium Finishing Plant (PFP). The government contractor in charge of the PFP demolition, CH2M Hill, stopped work on Wednesday after monitors being worn by workers turned up with high levels of radiation. Testing showed the particles contained the radioactive isotopes of plutonium and americium. The PFP job is risky because massive structures being demolished were so lethally radioactive that workers throughout the Cold War could not enter rooms where plutonium buttons were being created.

“This situation is another reminder of the challenging nature of the work at PFP and why we have a robust monitoring system in place. Demolishing PFP is a hazardous job. There isn’t anything else like it,” said Ty Blackford, President and CEO of CH2M Hill Plateau Remediation Company.

According to Blackford, there have been seven instances of “elevated radiological readings” on air samplers being worn by six different employees since December 8.

Internal Hanford documents about the events obtained by the KING 5 Investigators show that contamination was found outside the project’s containment zone on Wednesday. Alpha radioactivity (the most dangerous kind to be ingested or inhaled by humans) was found on items including a wooden valve box, a concrete slab, a concrete pillar, a man lift basket, piping, an electrical box, and a portable toilet.

This is the latest health scare for workers involved in the demolition. On June 8, hundreds of employees had to take cover after airborne radioactive contamination was detected. Originally Hanford officials called the event “precautionary” and that it appeared workers “were not at risk.” That turned out to be untrue. The June 8 spread of radioactive particles led to approximately 31 Hanford workers ingesting or inhaling radioactive particles.

“I think it’s bull sh**,” said a demolition worker at the time. “No one informed us that this was (a serious event). They hid that from us.”

Internal contamination of this type is considered particularly dangerous because it can take years for alpha radiation to decay inside the body.

“Plutonium will go to the bones and sit there for a long, long time,” said Dr. Eric Liebelt, the medical and executive director of the Washington Poison Center. “Your risks are lung cancer, liver cancer and bone cancer.”

The workers with high radiation readings on their personal monitors are undergoing additional testing to determine if the contamination is internal.

“They were not in areas where respiratory protection is required. They were wearing personal air monitors to provide additional monitoring for any potential exposure. Therefore, whenever elevated levels are discovered, further testing is performed on those workers,” said Blackford.

After the June event both the U.S. Department of Energy, Hanford’s owner, and the contractor said they increased safety protocols to prevent further breaches of their containment zones.