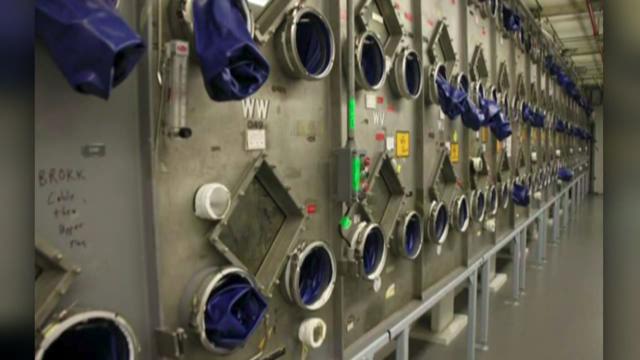 Around 350 Hanford employees were given the all-clear Thursday around 10:45 a.m. after taking cover for about three hours when two air monitors went off, signaling radioactive contamination in the air.

...The monitors have been placed around the demolition area to detect airborne contamination. The level of contamination detected was low...

The emergency occurred at the demolition site of the most hazardous facility on the 465-square mile Hanford reservation – the plutonium finishing plant. That was the last stop for production during the Cold War, from 1949 to 1989. Inside the building the environment was so lethally radioactive that workers could not enter rooms where work was taking place. Instead they carried out their duties remotely, using what are known as glove boxes, to turn liquid plutonium into button used to fuel nuclear warheads.

Sources tell the KING 5 Investigators that workers were removing some of those huge, highly contaminated glove boxes from the side of the building on Wednesday. Fixatives were applied inside the glove boxes to stabilize the radioactive particles to prevent spread, but that effort failed. On Thursday morning, the work continued when the alarm sounded. High winds had swept contamination off the boxes and onto the site.

KING has confirmed that alpha radiation was detected. Plutonium is an alpha emitter, meaning radioactive plutonium had escaped in a fine dust form. The contamination was found on stairs leading up to a trailer where workers put on protective gear, on sidewalks, near a vehicle entrance gate and in a parking lot where workers park their personal cars.

But workers report being told the take cover was precautionary only, and were not given real time facts about the contamination findings.

“I think it’s bull s***,” said one person working at the demolition site who did not want to be identified for fear of retaliation. “No one informed us this was a true take cover. They hid that from us.”

The contamination spread at the demolition site of the Plutonium Finishing Plant on the Hanford campus.

Workers were told to take cover via email, according to a copy obtained by KING 5's Susannah Frame.

Hanford reports the air monitor is located in the demolition area. That's where crews were working to demolish part of the plant.

Veteran Hanford worker says they knew event like this would happen because CH2M Hill "rushing the demolition." & "not listening to workers"

A spokesperson from the demolition contractor, CH2M, took exception to that.

“We work together to resolve concerns about safety, and we care about our employees’ safety. If someone feels the work is moving too fast or isn’t safe, we would expect them to stop it, and we all have the responsibility to do that,” wrote the spokesperson.

After the take cover order was lifted, workers were allowed to leave buildings with instructions to avoid contaminated areas. PFP employees were released from work at their normal time, according to the Department of Energy.

This demolition briefing was presented to the Hanford Advisory Board last month.

Officials said in a tweet that air monitors are used as a tool to ensure employee protection.

Read the statement provided by the US Dept. of Energy here

Picture of an air monitor near demolition area at Plutonium Finishing Plant pic.twitter.com/vpjU603Dbe