Contamination was detected in the air near the highway Hanford workers use to travel to work. 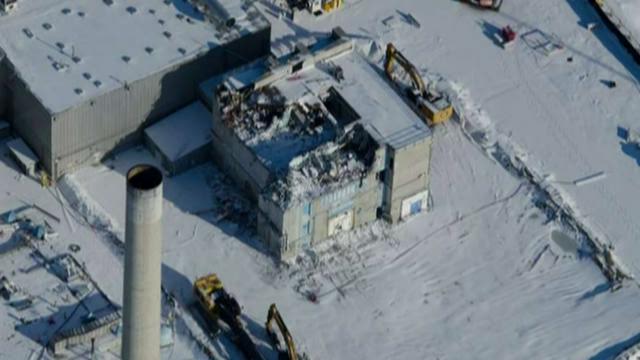 An internal Hanford memo obtained by the KING 5 Investigators reveals radioactive contamination was found in air samples taken on June 8 on a public highway bordering the site.

Radioactive particles were detected near the Rattlesnake Barricade, where hundreds of Hanford workers come and go to work every day just off Highway 240. The radiation is believed to have originated three miles away at the Plutonium Finishing Plant (PFP), a highly-contaminated structure that is being demolished as part of the overall Hanford cleanup project. On June 8, workers were removing a large portion of a building, and during that work alarms sounded after radioactive particles were detected outside the containment zone.

Sources said the radioactive particles detected near the highway are plutonium and americium – toxic heavy metals left behind after four decades of plutonium production at the former defense nuclear weapons complex.

Also on Tuesday, the KING 5 Investigators learned that six workers from the PFP site were taken to the onsite medical clinic after getting exposed to unknown chemical vapors Tuesday morning. The workers experienced symptoms including headache, sore throat and coughing after another crew unsealed drums containing nuclear waste. The crew members repackaging the aging drums were wearing proper respiratory protecting, according to a source who asked to remain anonymous.

The workers who displayed respiratory symptoms were not wearing the right kind of respirators, the source said. The employer in charge of the demolition project, CH2M Hill, confirmed that the workers had been cleared to “return to work.” The source with firsthand knowledge of the vapor event said after the clearance to return to work, some continued to experience coughing and headache.

Regarding the contamination found near the Rattlesnake Barricade – three miles from the PFP demolition project –authors of an internal memo sent to all Hanford employees said the level of radiation detected was low.

“The result from the high volume air sample taken near the Rattlesnake Barricade indicates contamination at detectable levels. DOH (Washington State Dept. of Health) has stated that the amount detected is below levels that would be of concern for human health,” wrote U.S. Department of Energy officials. The Department of Energy is the overall manager of the Hanford Site.

“To put it out there that there are safe levels of plutonium that may have been inhaled is misleading. It makes me wonder, ‘Who are the people at the Department of Health responsible for protecting our health?’ The EPA fact sheet says inhalation of plutonium leads to increased risk of cancer,” said Tom Carpenter, executive director of the advocacy group Hanford Challenge.

"If the continuous air monitors at the security entrance from SR 240, three miles from PFP, detected Plutonium, then the public on SR 240 and workers in areas surrounding PFP were also placed at risk and may have been exposed. All people who were in the area and are concerned should have been offered bioassays (contamination tests)," said Rep. Gerry Pollet (D-Seattle) and executive director of the advocacy group, Heart of America NW.

The Department of Energy said in the memo that they had received the results from DOH on Monday. The air samples were collected on June 8 after the on-site radiation alarms sounded.

Approximately 350 workers were ordered to “take cover” on June 8 after the air monitors alarmed. At the time the Department of Energy and its contractor in charge of the demolition, CH2M Hill, called it a “precautionary take cover.” Officials downplayed the event as not serious with statements including it appeared “workers were not at risk”...“(the alarm went off) in an area where contamination is expected,” and there was “no evidence radioactive particles had been inhaled” by anyone.

Workers outside of the PFP job site were not alerted about the breach of containment of radioactive particles on June 8. Now that air sampling results show contamination was at the Rattlesnake Barricade, which is three miles away from the PFP demolition site, some workers expressed concern for their health.

“They should have contacted the other contractors and let them know what happened. No one took cover in other facilities and didn’t know what was going on. I think it was irresponsible not to do more. They downplay a lot of things (at Hanford),” said a worker who did not want to be identified for fear of retaliation.

On August 3, the KING 5 Investigators revealed of the first 65 tests taken on demolition workers after the incident, 12 came up positive for internal contamination of radioactive plutonium.

An internal CH2M Hill email sent to their employees on July 21 was obtained by KING. It states that 301 (test kits) have been issued to employees and of the first 65 workers tested, a “small number of employees” showed positive results for “internal exposures” to radioactive plutonium.

Sources tell KING the “small number of employees” is 12, which is nearly 20 percent. Still outstanding are 236 tests.

A communication specialist with CH2M Hill sent a statement that more positive results are expected.

The 301 people being tested work at the PFP demolition site. Now that it is confirmed the contamination spread at least three miles to the Rattlesnake Barricade, the question is whether other people may have inhaled contamination or should be tested.

“Obviously, the release of plutonium from the site onto a public highway should set off alarm bells,” said Carpenter.

Hanford workers said they are not concerned about the small dose of internal radiation detected in the tests, but about the contamination inside the body from plutonium. All radiation is not created equal. Radiation from an x-ray, air flight, or a microwave is a different and far less dangerous type than the kind emitted by plutonium inside the body. Unlike x-rays, air travel or microwaves, plutonium emits alpha radiation, which is the most destructive type to inhale or ingest.

The internal memo sent on Monday said investigation into the plutonium and americium release is ongoing.

“(Department of Energy) will conduct analyses to determine the source of the low levels of contamination in coordination with DOH and will communicate results as soon as possible,” wrote the authors.

Workers and advocates said the Department of Energy and its contractor should re-think precautions as they move forward with the dangerous demolition project, which is supposed to be finished by September 30.

“They should have put the whole damn demolition project under a tent – a contained demolition. It was a short cut to make the job less expensive. That’s the Hanford story: take short cuts, kick the can down the road. That puts the public and workers at risk. (They need to) do it right,” said Carpenter.

"Heart of America NW has repeatedly voiced objections to demolition without containment and without taking into account that there were numerous accidents which spread Plutonium - even outside the plant, such as the 1997 explosion which lifted the roof off and spread Plutonium into the parking lot. Demolition of the outside of PFP has potential to spread contamination," said Pollet.

The Hanford Site was the location of one of the most important facilities to the secret Manhattan Project in the 1940’s as the country raced to create a nuclear bomb before the Germans. Plutonium produced at Hanford fueled the “Fat Man” bomb dropped on Nagasaki, Japan in 1945. After the end of WWII, production continued at Hanford to aid in the stockpiling of nuclear warheads throughout the Cold War. Production ceased in the late 1980’s and today work at Hanford is strictly a cleanup effort, expected to last at least another 75 years.