For nearly 40 years, Hanford's own experts have been raising red flags about the tunnel that collapsed on May 9. Documents obtained by the KING 5 Investigators show that advice went unheeded. 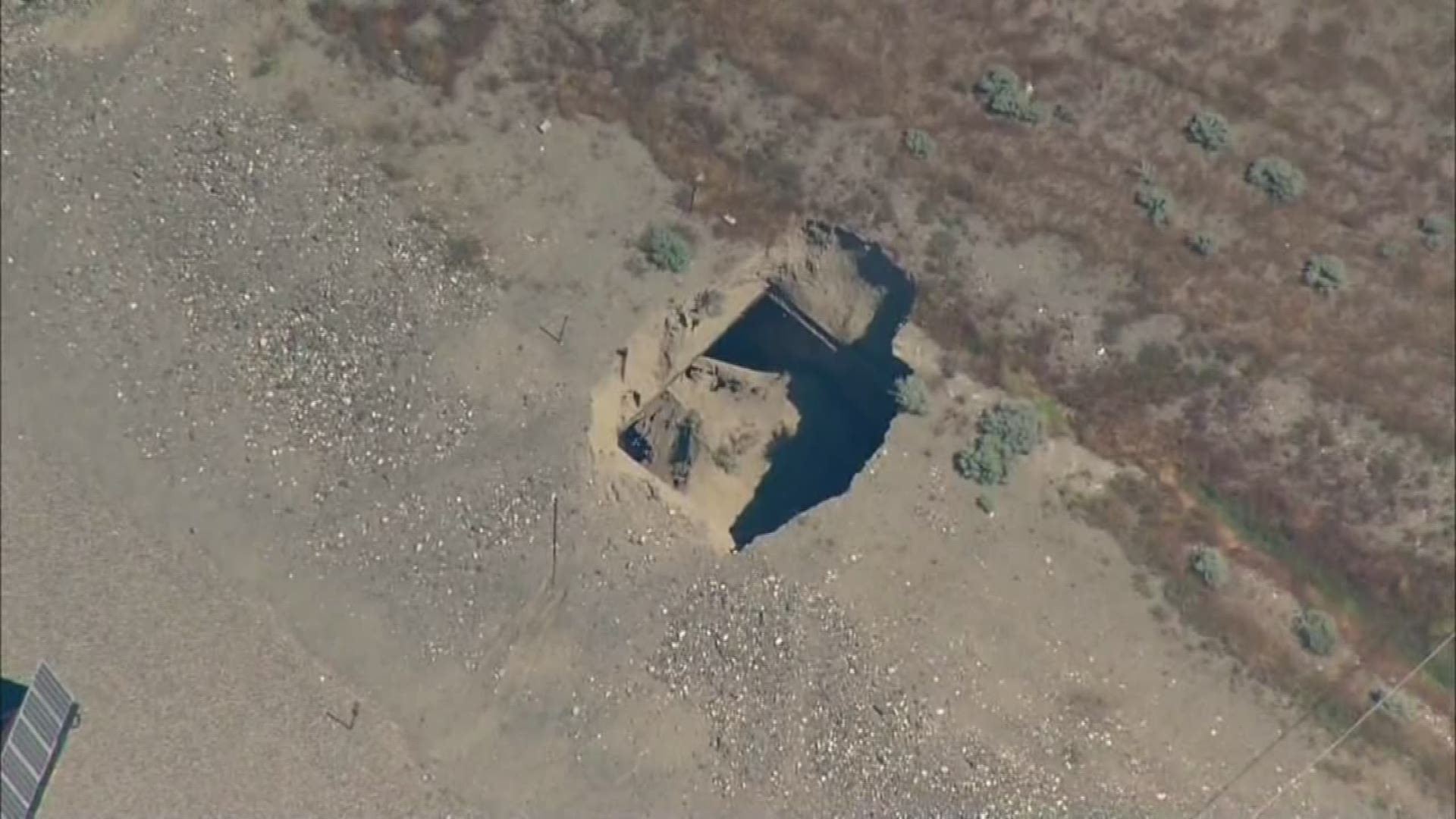 Scientists hired by the U.S. Dept. of Energy (DOE) began a series of warnings about the possible failure of Hanford’s PUREX tunnels nearly four decades ago. Documents obtained by the KING 5 Investigators show a series of pieces of expert advice that went unheeded.

“If the contents of the tunnel must be removed, it should be deactivated as soon as possible to ensure the tunnel is still structurally sound during the removal operation,” wrote DOE expert G. R. Silvan in 1980.

That was 36 years ago. Instead of acting, Hanford officials dragged their heels. Due to inattention to the vulnerable storage tunnel, the Hanford Site made international headlines on May 9 when a portion of PUREX Tunnel #1 collapsed – exposing Cold War-era equipment, highly contaminated with radionuclides, heavy metals, and toxic chemicals. If it had been a windy day, radioactive particles could have been scattered across Eastern Washington and perhaps beyond.

“If the breeze would have been blowing harder and if (heavy wooden timbers supporting the tunnel) would have fallen quickly instead of slowly and caused a big plume, we could have been contaminated. We could have had contamination out there. How far it would have gone, I don’t know,” said veteran Hanford radiation specialist Steve Ellingson.

Hanford had dodged a bullet. Even though higher radiation readings were detected, there is no indication those were harmful to the environment or human health. And due to a lack of wind, the DOE, which owns Hanford, said no contaminated particles that could have been inhaled or ingested became airborne.

“We feel very fortunate about that,” said top Hanford official Doug Shoop at a news conference on May 13.

A review of the DOE’s own documents drafted in 1980 and 1991 shows the near-disaster could have been prevented if the DOE would have followed the advice of its own experts.

The Washington State Dept. of Ecology, one of Hanford’s regulatory bodies, issued a Notice of Deficiency to the DOE about the tunnels on February 5, 1991. The document raised the issue of “questionable integrity” of Tunnel #1. The state ordered the DOE to evaluate tunnel integrity. That evaluation, submitted to the state on Sept. 6, 1991, found the wooden timber beams supporting the tunnel was degrading from radiation.

“The only structural degradation that is occurring is due to the continued exposure of the timbers to the high gamma radiation field in the tunnel,” wrote the experts from Los Alamos Technical Associates. “The ideal solution to the problem is to make permanent disposal of the dangerous waste in Tunnel #1 immediately.”

The authors went on to advise that if the tunnels were not cleaned up and closed by the 2001, additional testing of the wood beams should take place.

“It is conservatively estimated that the strength of the timers will be at 60 % of original strength in the year 2001. At that time it is recommended that the structural integrity of the tunnel be reevaluated,” wrote the scientists in 1991.

KING 5 has found no documentation that the reevaluation ever took place.

“That’s astounding and it’s incredibly reckless for the health and safety not only for the workforce but of the entire Northwest,” said Rep. Gerry Pollet (D-Seattle). Pollet is the executive director of the advocacy group, Heart of America Northwest. The organization has urged the federal government to take action to ensure the safety of the tunnels since the mid-90s. Pollet said in hours of meetings with Hanford officials, there was never any mention of the 1980 or the 1991 study.

“To learn today from the documents (KING) obtained that in 1991 action was urged immediately and that was never shared. That’s just astounding. No one said anything (to me) about that,” said Pollet.

When KING 5 asked representatives of the U.S. Dept. of Energy at Hanford if the recommended evaluation ever took place, they didn’t answer the question. Instead, a spokesperson sent this statement:

“Our goal at Hanford is to protect employees, the public and the environment, and we've made significant progress. We work with our regulators, technical experts, and the public to establish priorities for the extensive and complex remedial actions at the site.”

The tunnel that collapsed is located under a massive facility on the Hanford reservation called PUREX – the plutonium uranium extraction plant. Workers processed plutonium in the facility that is now closed, and highly contaminated. When pieces of PUREX processing equipment were no longer needed or broken Hanford contractors in the 1950s and 1960s loaded up railcars with the highly radioactive and chemically contaminated items. By remote control the cars were buried in the tunnel without protective packaging that would be standard today. Tunnel #1 holds eight railcars full of some of the “hottest” solid materials at Hanford.

KING obtained documents detailing the types of toxins in the tunnel and the level of contamination. Dangerous compounds such as lead, mercury, chromium cadmium, and silver have contaminated the equipment. Silver can cause a fire. Other documents show massive amounts of radiation– some items measured at 40,000 curies. That’s a measurement of radioactive atoms rarely seen anywhere.

“It’s actually a very big number like a megaton from an atomic bomb. (It’s) a very big number. A curie is a lot of radioactivity,” said radiation and Hanford expert Dr. Marco Kaltofen of Boston. Kaltofen, a professor at the Worcester Polytechnic Institute, analyzed the documents obtained by KING.

“There’s enough radioactivity to cause a major problem. Not just if there were a fire, but if another hole allows the wind to essentially ventilate that tunnel and blow that material into the environment. We have no idea how far it will spread. There’s plenty of potential for havoc in the environment,” said Kaltofen.

There has been outside pressure on the DOE to protect the integrity of the tunnels and to clean up the waste buried in them as well. The federally chartered Hanford Advisory Board issued direction on February 4, 2016 on the tunnels. “The Board advises the TPA (Tri-Party Agreement) agencies to expeditiously investigate whether the PUREX tunnels pose a high risk, and if so, to then negotiate milestones to being planning for their remediation.”

The worst case scenario for the tunnels and those who work and live around Hanford is outlined in yet another Dept. of Energy-commissioned study from 2015. Experts from the Consortium for Risk Evaluation with Stakeholder Participation (CRESP) found an earthquake could lead to a lethal release of radioactivity.

“A…seismic event could lead to a total structural failure of the (PUREX) building and both tunnels, causing an estimated (dangerously high dose of radioactivity to workers who are not wearing appropriate protective gear),” wrote the authors.

“Every day that we don’t have an earthquake we’re just buying time against a massive release of radiation from the tunnel,” said Pollet.

On May 10 the state Dept. of Ecology issued an Administrative Order requiring the DOE to find the cause of the breach, and to submit a plan for stabilizing the tunnel to ensure its safety until the waste is removed and properly stored. Ecology listed five violations of the state’s hazardous waste laws in the Order.

“I’m at wit’s end and that’s why they (the DOE) saw a record Order from us within a day of the event. I hope that they do the right thing, that they don’t appeal the Order, and do the work required as quickly as they can,” said Maia Bellon, Director of the Dept. of Ecology.

“We’re now at the point of hoping that Congress has received a wakeup call about things that have been put off – old infrastructure, over half-a-century old tunnel that can’t be left as status quo,” said Bellon.

Hanford was a key facility for the country’s nuclear weapons program from the early 1940s to 1989 when the Cold War ended. For approximately 45 years, plutonium was produced at the reservation located near Richland. Hanford is considered the most toxic workplace in the United States as well as the country’s biggest nuclear dump.

Related: What is Hanford?