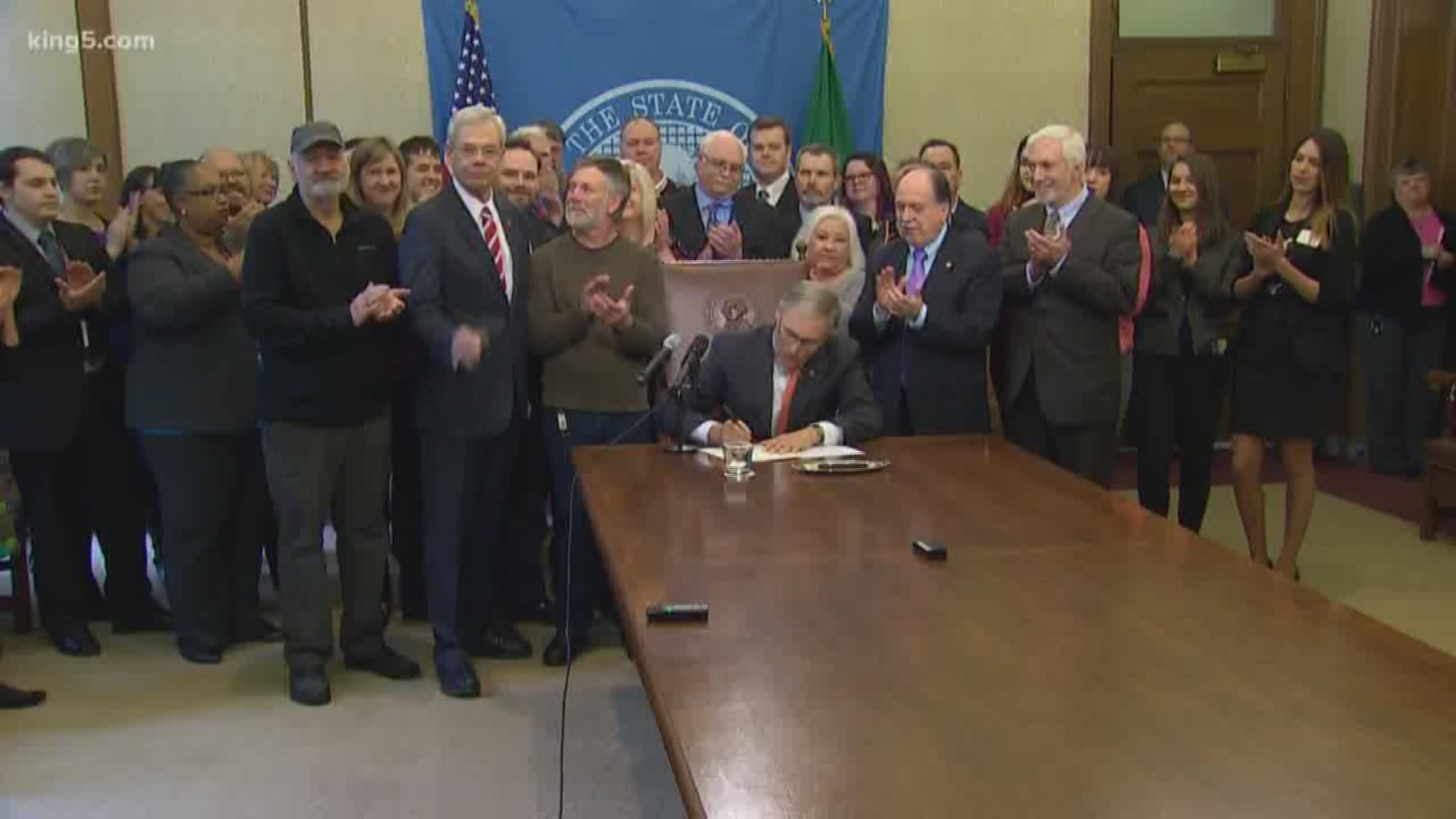 The U.S. Department of Justice has sent a threat to the state of Washington. It boils down to this: Get rid of the law passed to help sick Hanford workers or a lawsuit is on the way.

After a two-year investigation by KING 5, a landmark law was passed by the state legislature that aims to help sick Hanford workers get their worker compensation claims accepted. The KING 5 Investigators found that hundreds of workers, sickened by exposure to toxins at the nuclear site, were systematically denied their claims. That left them without proper medications and health care for conditions such as toxic encephalopathy (occupational dementia), lung disease, and respiratory illnesses.

On March 7, 2018 Gov. Jay Inslee signed the bill into law that gives workers with certain illnesses the presumption that they got sick at Hanford, the most toxic worksite in America.

In the letter received by the Office of the Governor on November 5, 2018, James Gilligan, an acting director of the civil division of the Department of Justice (DOJ) wrote the new law “violates the Supremacy Clause of the U.S. Constitution because it discriminates against the federal government.”

Gilligan wrote the state law is unconstitutional because it singles out the U.S. Department of Energy, which owns Hanford, and the contractors who work for the federal agency. The Dept. of Energy runs its own worker compensation program.

“The law, which applies only to workers at the Hanford site, is impermissibly discriminatory because it treats other entities in the State better than it treats federal contractors and the Federal Government,” wrote Gilligan.

The wife of former Hanford worker Lonnie Rouse said the threat of a lawsuit is insulting to all the families who have fought to finally get help. Lonnie Rouse has several adverse health effects that doctors say are related to his exposure to toxic chemicals and mercury at Hanford.

“That pisses me off. Trump needs to come over here and do his research before he jumps to any decision. (Repealing the law) would put us back to square one. How is that justice?” said Melinda Rouse.

RELATED: At Hanford, workers comp can be 'humiliating' system

Lonnie Rouse suffers from toxic encephalopathy (occupational dementia), which is a neurological illness covered by the new law. He fought the Dept. of Energy and its contractor that manages worker compensation claims for 10 years. They were denied his claim for dementia at least four times until October 31, 2018. That’s when the Rouses finally got a letter in the mail saying the claim had been accepted. That was three months after the new law went into effect.

“We fought so hard to get the stories out there to show how unfair this is, and now they’re going to squash it?” said Melinda Rouse.

Hanford worker advocates wrote a letter to Inslee to urge him to fight the Dept. of Justice if a lawsuit is filed.

“We urge you to stand with the Hanford Nuclear site workers who risk their lives to clean up the most contaminated worksite in the western world,” wrote representatives of the advocacy group Hanford Challenge and Local Union 598. “(The state law) does not violate the Supremacy Clause, but rather is an appropriate response to address the documented history of inadequate treatment of the hazards associated with the Hanford clean up and resulting worker compensation claims. It is commonly recognized that states possess broad authority un their police powers to protect the health, safety, and welfare of its citizenry.”

Gilligan said the DOJ is willing to “resolve this matter without litigation” but that they intended to file the legal action “on or about November 30, 2018.”

In a statement, Washington State Attorney General Bob Ferguson said the state stands behind the law.

“If the Department of Justice challenges this law in court, I look forward to defending it. Hanford workers deserve to be compensated for the health issues caused by their dangerous work. My office is undefeated in court against this Department of Justice, so we are confident it will be upheld,” wrote Ferguson.

The Hanford Site is located near Richland, along the Columbia River. Between 1942 and 1989 workers produced plutonium that fueled the atomic bomb dropped on Nagasaki, Japan during World War II. Production continued throughout the Cold War as the U.S. stockpiled nuclear warheads. For the last three decades Hanford has been a clean up site only. Workers are dismantling buildings contaminated with radioactivity as well as tending to 56 million gallons of radioactive, chemically contaminated liquid waste held in aging underground tanks, many of which are known to be leaking.