The group voiced their frustrations with the governor, and the impact the increased restrictions are having on businesses and holiday gatherings. 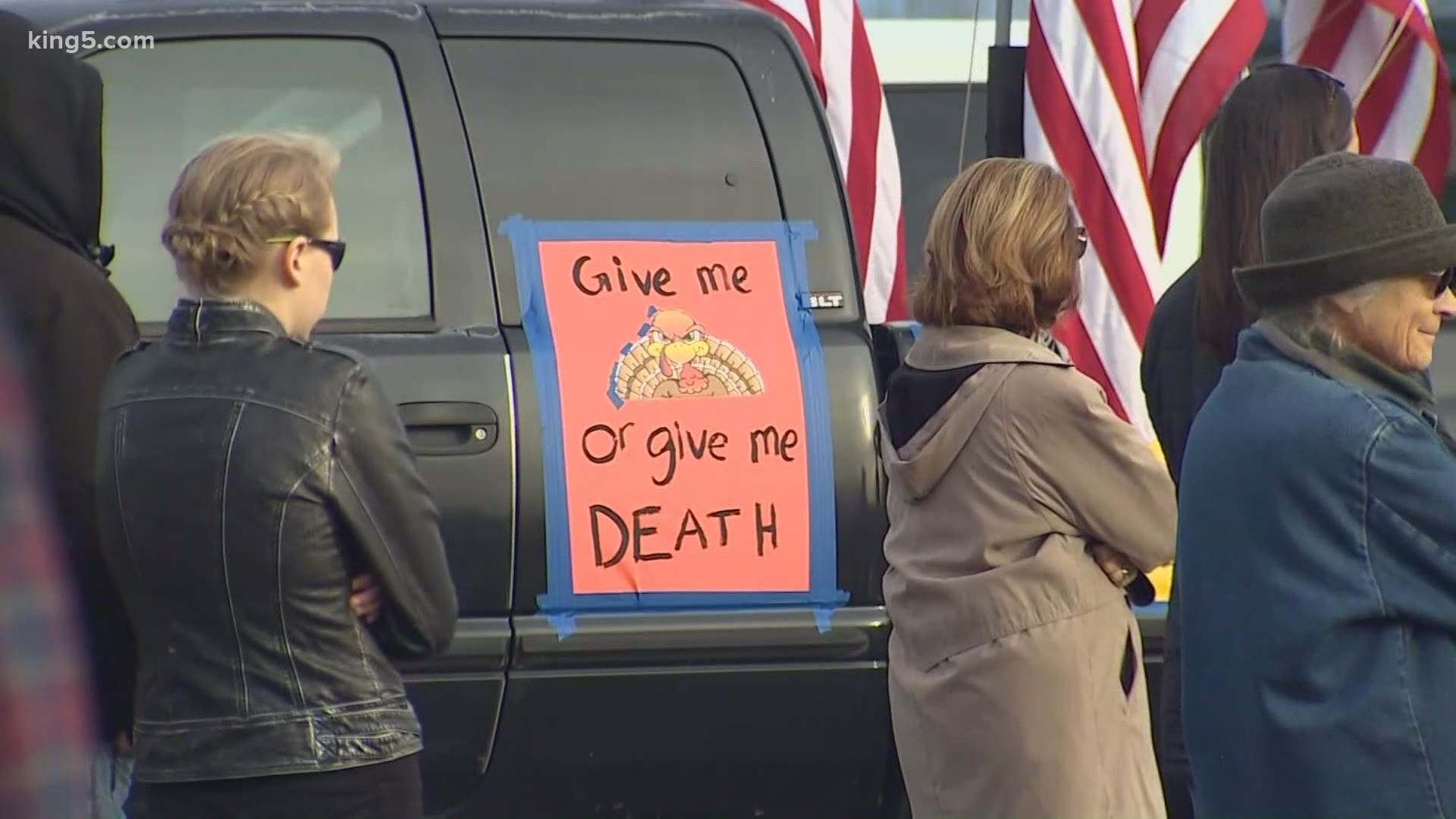 BELLINGHAM, Wash. — It's only been a few days since new coronavirus restrictions imposed by Governor Jay Inslee took effect, but already some in western Washington are rallying to say the rules go too far.

Community members, business owners, and even some state lawmakers gathered in Whatcom County on Saturday for what they called, "The Turkey Day Rebellion."

The group voiced their frustrations with the governor, and the impact the increased restrictions are having on businesses and holiday gatherings.

"We're not taking it no more, we're going to have Thanksgiving with our families and you're not telling us otherwise," said State Rep. Robert Sutherland, (R-Granite Falls), who spoke to the group gathered in a Bellingham parking lot.

There were only a handful of people wearing masks at the rally but some in the crowd seemed to keep their distance from others. One speaker said they're aware some need to take precautions due to the virus.

“If you're in an at-risk category then you need to be careful and we want to support that. We do not want to hurt anyone," said Jim McKinney to the crowd.

Organizers said they didn’t agree with decisions made by Gov. Inslee and the Washington State Department of Health (DOH). They said they don't believe the latest data about COVID-19 warrants the level of shutdowns and restrictions that are happening.

State Sen. Doug Ericksen said he's worried about what the shutdowns are doing to businesses and the economy.

"The phone calls coming into my office have changed significantly from April, May, June to today," Sen. Ericksen said. "Before it was like this is going to be hard we can't do it like this... now it's like we can't survive, this has to end."

Rep. Sutherland said keeping lawmakers out of Olympia for the next legislative session is going to make it even harder to share opposing viewpoints.

After the rally in Bellingham, the group caravanned up to Lynden where they rallied outside some businesses that are defying the governor's order and staying open.

"We really need each other, our kids are not in school and the mental health of all of this is so big," said Ashley Butenschoen, who helped organize the event. "We need to come together and be there for each other."

Several in attendance said they plan to defy the governor's orders to limit Thanksgiving celebrations and will have more rallies like the one Saturday so their voices can be heard.