Newsom ordered bars to close in Fresno, Imperial, Kern, Kings, Los Angeles, San Joaquin, and Tulare counties and recommended they close in at least 8 others. 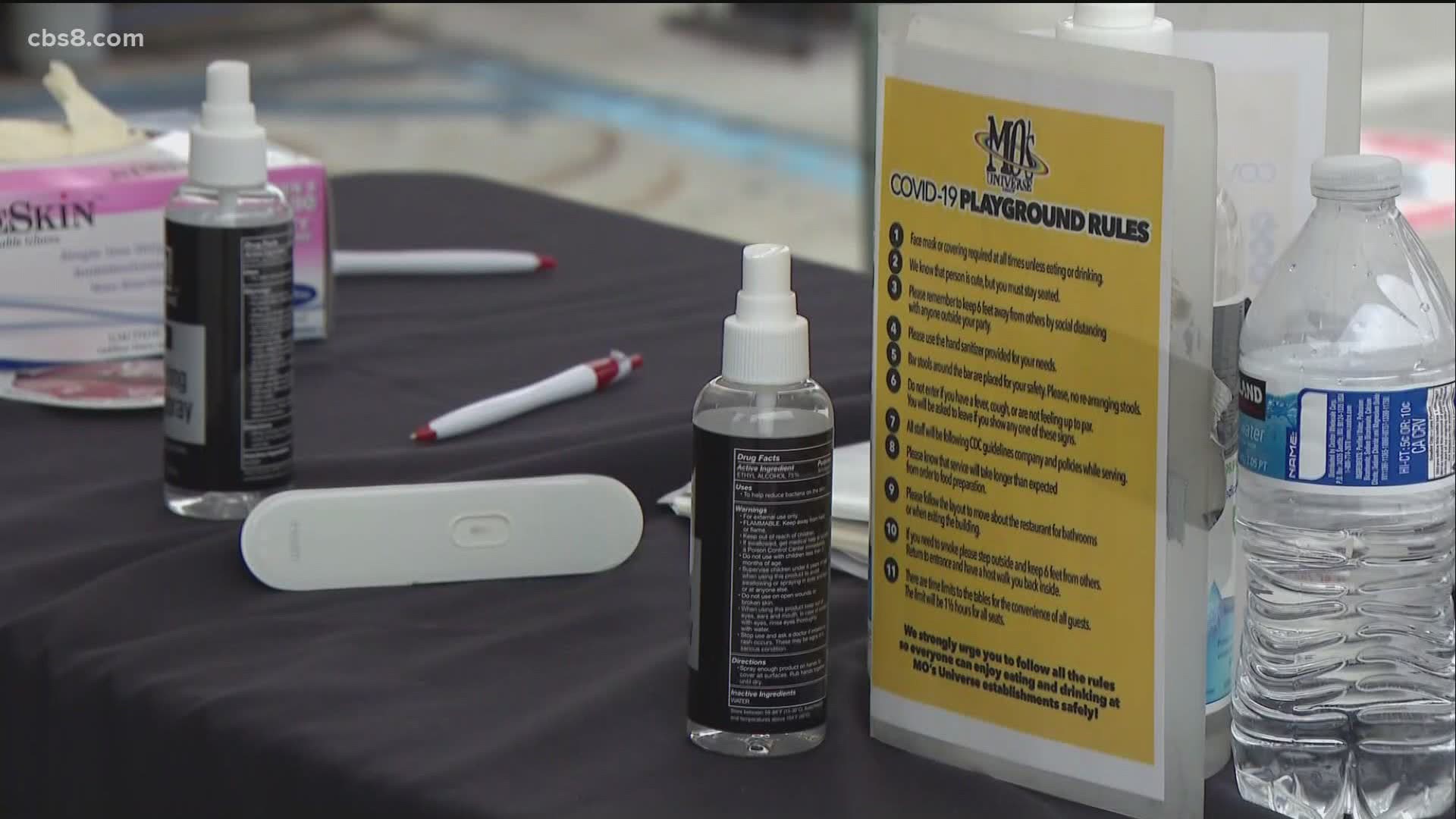 LOS ANGELES COUNTY, Calif. — Gov. Gavin Newsom on Sunday ordered bars in Los Angeles County and six other counties to close to prevent further spread of the coronavirus, as the state experiences a surge in new cases and evidence of rising community transmission.

Underscoring the warnings from the state, county officials released their daily coronavirus update a few hours later, and it showed another 2,542 newly confirmed cases of COVID-19 and 20 additional deaths, bringing the county's totals to 97,894 cases and 3,305 fatalities.

"Californians must remain vigilant against this virus," he added in a statement issued later. "COVID-19 is still circulating in California, and in some parts of the state, growing stronger. That's why it is critical we take this step to limit the spread of the virus in the counties that are seeing the biggest increases. Each of us has the power to limit the spread of this virus. Wear a face covering and keep physically distant outside the home. Don't gather in groups, and if you are older or have a condition that puts you at higher risk of COVID-19, protect yourself by staying home."

The California Department of Public Health guidance says that "brewpubs, breweries, bars, and pubs, should close until those establishments are allowed to resume operation per state guidance and local permission, unless they are offering sit-down, dine-in meals. Alcohol can only be sold in the same transaction as a meal."

The state's news release says that "bars are social environments where groups of people mix. In these environments alcohol consumption reduces inhibition and impairs judgment, leading to reduced compliance with recommended core personal protective measures, such as the mandatory use of face coverings and the practice of social and physical distancing. Bars are generally louder environments requiring raised voices leading to the greater projection of droplets. These factors present a higher likelihood of transmission of COVID-19 within groups, between groups, and among the workforce.

"Public health professionals within California and throughout the nation have identified bars as the highest risk sector of non-essential business currently open. Beyond the higher risk of transmission in bar settings, contract tracing, a key measure needed to control spread, is also more challenging in bars because of the constant mixing among patrons and a lack of record-keeping of those in attendance."

Local law enforcement agencies said they were just learning of the order along with everyone else.

"We just got the notice. But as of right now, we have not been given any guidance, which way. It's breaking news," Officer Rosario Cervantes of the Los Angeles Police Department's Media Relations Section told City News Service.

"We probably won't know of anything until Monday," said Deputy Tina Schrader of the Los Angeles County Sheriff's Information Bureau. "We are the last to know."

Los Angeles Mayor Eric Garcetti offered support for the move, tweeting: "As we started reopening more businesses, we cautioned that we may need to change course to protect public health from this deadly virus. I support @CAGovernor's order to close bars in L.A. County and other counties to limit the spread of COVID-19."

On June 5, the state posted guidance allowing for the opening of bars as of June 12, if their opening could be allowed by local public health officials. The counties ordered to close bars had been on the state's County Monitoring List for 14 days or more, while the counties that were only being advised to close them were on the list for three or more consecutive days, but less than 14 days.

"While it's disappointing to take a step back on our economic recovery journey, it's critical that we protect the health of our residents and protect the capacity in our healthcare system," said Barbara Ferrer, Los Angeles County's director of public health. "I implore that our residents and businesses follow the Public Health directives that will keep us healthy, safe and on the pathway to recovery. Otherwise, we are quickly moving toward overwhelming our healthcare system and seeing even more devastating illness and death."

According the Los Angeles Department of Public Health, the seven-day average of daily new cases is more than 1,900, an increase from the 1,379 average two weeks ago. There are 1,717 people currently hospitalized, which is higher than the 1,350 to 1,450 daily hospitalizations seen in recent weeks.

Some officials have attributed the rise in overall cases to increases in testing, but Ferrer said repeatedly in recent days that the metrics clearly demonstrate an increase in community spread of COVID-19, the disease caused by the coronavirus.

Ferrer said Thursday that residents and business owners -- most notably bars and restaurants -- have a joint responsibility to adhere to health requirements and protocols. She noted that over the three recent weekends after restaurants and bars were permitted to reopen for dine-in service, county inspectors visited more than 3,700 establishments, and 83% of them were found not to be in full compliance with county protocols for reopening.

Ferrer said that over the past two months, the largest percentage of complaints the Department of Public Health received about restaurants and other businesses were violations of the requirement that safety protocols be publicly posted at each establishment and distributed to employees. The second most common complaint was people not wearing face coverings.

"Business owners, we ask that you too do your part," Ferrer said Thursday. "Our guidelines are not suggestions. They are mandates. If you see someone in your business that's not wearing a face covering, take action. If you see large groups of people congregating in your business, question whether those folks truly came from the same household and take action. Ask them to step away from each other.

"I know this is difficult. It's summer, restaurants and bars are open and things seem like they're back to normal, but they're not. The virus is deadly. The virus remains in our community and if we don't collectively take the necessary steps to be safe we'll continue to see people we love get sick, be hospitalized and potentially die."

Officials are also warning the public about reports of phony mask exemption cards that depict a government seal with threatening language.

"Everyone, except children under the age of 2, should wear a face covering securely over their nose and mouth any time they leave the house and keep six feet apart from others not in your household when out and about," a health department statement said. "People with medical conditions that prevent safe use of a face covering are asked to wear a face shield. Accurate information will always be distributed officially by Public Health through official channels in the form of a press release, on the Public Health website and through social media accounts @lapublichealth."

Ninety-four percent of the county's 3,285 coronavirus deaths have occurred in people with underlying health conditions.