Washington Governor Jay Inslee called for a 21 percent increase in the state budget over the next two years funding new dollars into schools, mental health programs, and environmental policies, including funding to support orca recovery. 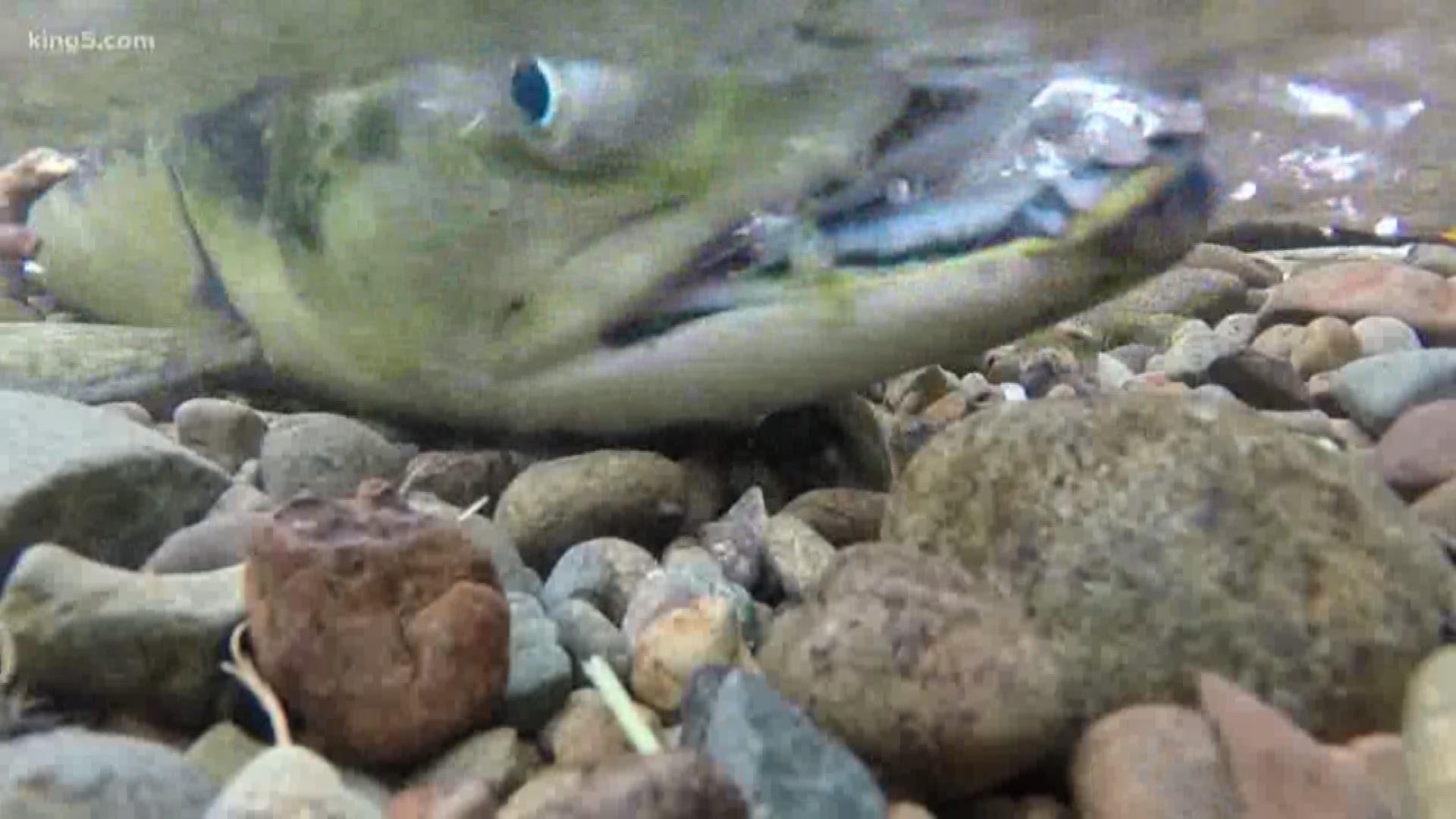 Gov. Jay Inslee is proposing a new capital gains tax and an increase in business taxes on services as part of his next two-year budget proposal that looks to increase spending on the state's mental health system and the environment, including efforts to help the state's struggling orca population.

After rolling out his policy goals on tackling climate change and the mental health system earlier in the week, Inslee on Thursday unveiled more specifics for the 2019-2021 budget cycle.

Most of the revenue from the $3.7 billion tax package proposed by Inslee comes from an increase in the business and occupation tax on services provided by accountants, attorneys, real estate agents and others. Under his plan, that tax would increase from 1.5 percent to 2.5 percent, which would raise $2.6 billion in the 2019-2021 budget.

About $975 million would be raised in fiscal year 2021 from a 9 percent capital gains tax on earnings from the sale of stocks, bonds and other assets above $25,000 for individuals and $50,000 for those who file jointly. The tax would take effect in mid-2020.Retirement accounts, homes, farms and forestry would be exempt.

"Only a small fraction of our state's wealthiest citizens will be pitching in," Inslee said.

Inslee's budget office estimates about 42,000 households will be affected by the capital gains tax.

Braun said he did not think there would be enough support in the legislature to pass a capital gains tax.

"I don't think we can take this budget all that seriously," said Braun.

"I am shocked as the people of Washington state are going to be when they find out what this is going to cost," said Barkis, R-Olympia.

Last month's revenue forecast showed that the state revenues for the next two year cycle increased to $50 billion. But officials in Inslee's budget office say that amount isn't enough to adequately fund priority issues like mental health and other programs in addition to maintaining government services at current levels, including billions put toward the state's education system. A part of that ongoing cost is the investment the Legislature has made in basic education as part of a multi-year court case that was resolved earlier this year. Under the governor's budget plan, budget revenues for the next two-year cycle will be $54.4 billion. 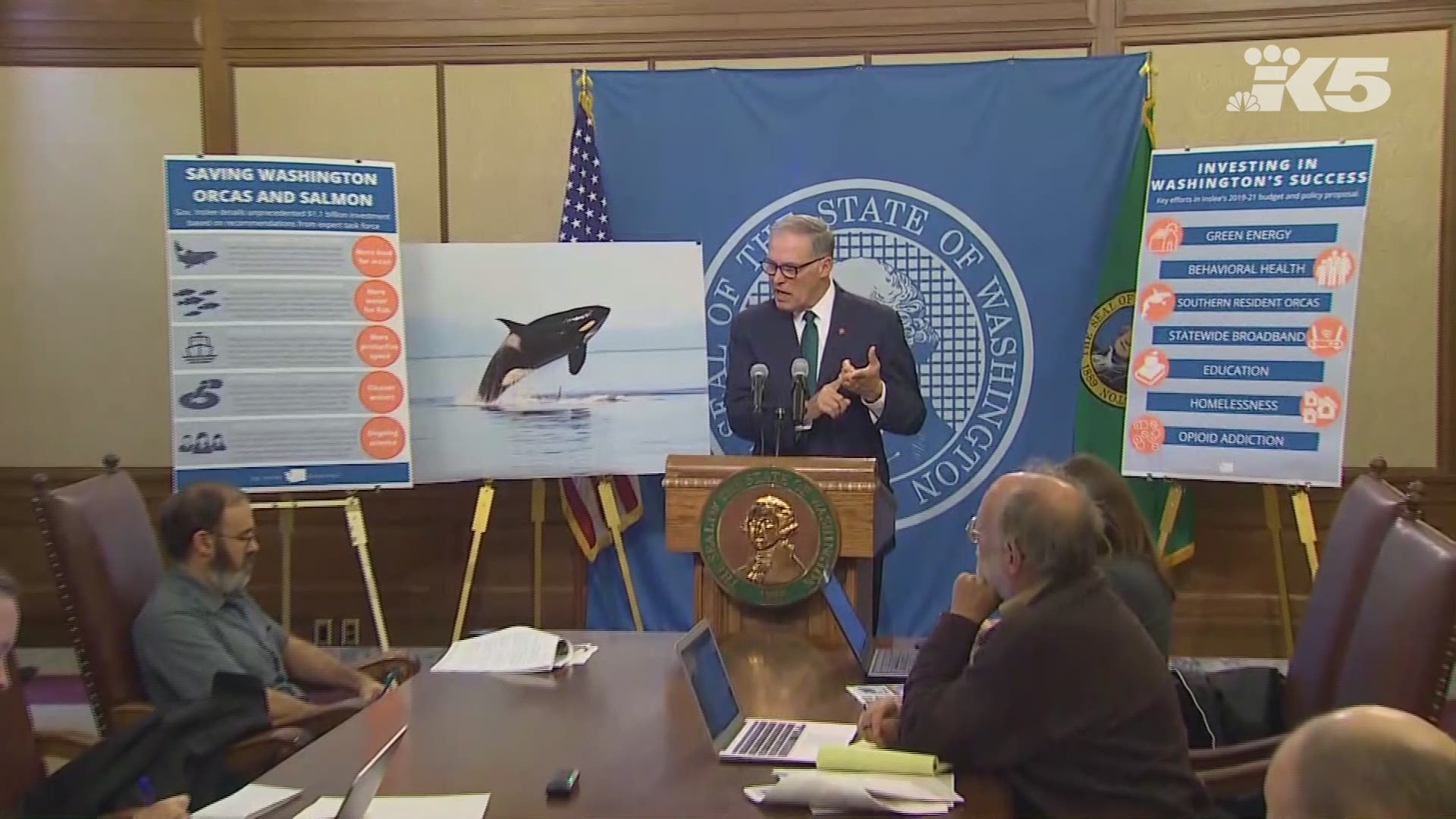 "If we didn't have this $4 billion growth in K-12, we wouldn't have had to raise taxes $3.7 billion," said David Schumacher, director of the Office of Financial Management. "The pressure on the whole budget is from K-12, it's from the decisions we've made over the past few years."

Inslee is proposing $1.1 billion in spending — and a partial whale-watching ban — to help support the recovery of Puget Sound's critically endangered orcas.

Inslee rolled out some of his policy ideas earlier in the week. On Monday, among the climate change measures Inslee proposed was eliminating fossil fuels like natural gas and coal from the state's electricity supply by 2045.

There was no carbon tax or fee included in the governor's slate of proposed legislation that his office said would reduce carbon emissions to 25 percent below 1990 levels by 2035.

The centerpiece requires utilities to provide carbon-free electricity by 2045. Another major effort would implement a clean fuel standard — similar to a program in California — that requires fuel producers and importers to reduce the carbon emissions associated with transportation fuels.

Inslee has included $268 million in his proposed two-year budget to pay for his clean energy initiatives. The efforts include boosting electric vehicle use, promoting more energy-efficient buildings and phasing out hydrofluorocarbon, potent greenhouse gases commonly used for refrigeration.

In advance of Thursday's official rollout, Inslee on Tuesday called for a $675 million increase in mental health spending over the next two years, including funding for his previously announced plan to move people hospitalized on civil commitments out of the state's two psychiatric hospitals and into beds at facilities in the community. Western State Hospital — an 850-plus bed facility in Lakewood — has been plagued with problems and has lost its certification by the Centers for Medicare and Medicaid Services and federal funding after it repeatedly failed health and safety inspections.

The governor's budget is just the first of three to be released in the coming months. After the next legislative session begins Jan. 14, the Senate and House will also release proposals during the 105-day session.