Bump stocks can be used to convert a semi-automatic firearm into a fully automatic one. 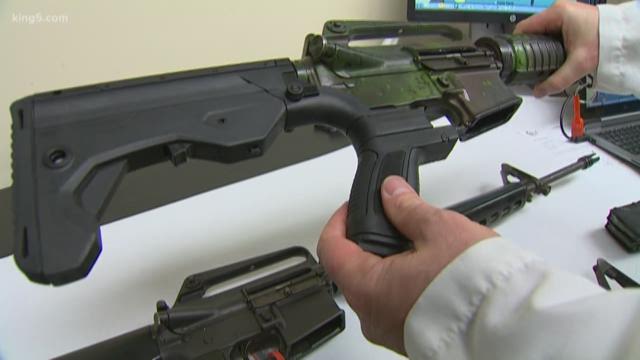 Bump stocks can be used to convert a semi-automatic firearm into a fully automatic one.

"Normally speaking, about 650 to 700 rounds a minute is how fast that will fire in full automatic mode," said Wyant.

"These weapons can fire three times faster than an appropriately, licensed semi-automatic weapon, and that three times spells mass carnage and the type of devastation we saw in Nevada," said Inslee.

In Las Vegas on October 1st, 2017, a gunman using bump stocks carried out a massacre that claimed 58 lives.

"We do not want to see that in Olympia or Mount Vernon or Spokane or any other city in the state of Washington," said Inslee.

The governor is urging the state legislature to ban bump stocks right away.

"I think at least Monday we should stop their sale which the Washington state legislature can do if they will act," said Inslee.

Dave Workman, the senior editor of theGunMag.com, said moving fast on any legislation like this typically has a bad result.

"It may be a gesture that is a little empty. Before October 1st of last year, nobody outside of the shooting community ever heard of these things. I have never heard of one being used in a crime other than at Las Vegas," said Workman. "I think that the people in Olympia are probably going to want to keep that in perspective."

But Inslee's mind is already made up.

"We got to wait until there are 49 mass carnage shootings with bump stocks before we wake up in the state of Washington? I don't think so. We know the damage they can inflict. Unfortunately, they are available in our state, and that is just wrong. It’s unacceptable," said Inslee.

Inslee also wants the ban to impact people who already have bump stocks in Washington.

"The ban would say you got to turn them in. There is no reason to have a bump stock," said Inslee.