Gov. Inslee tells Trump "Your hate is not welcome in our state"

OLYMPIA - Governor Jay Inslee and other Washington Democratic leaders took aim at Donald Trump on the eve of his Washington visit. 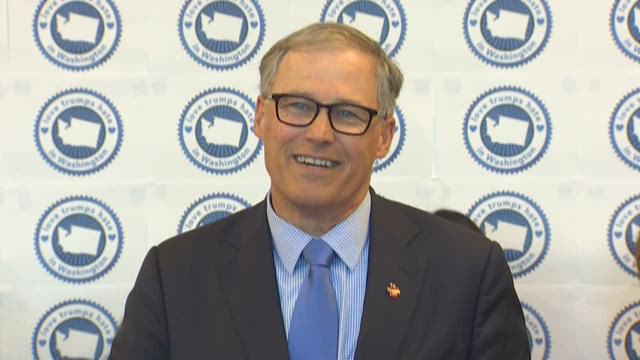 OLYMPIA - Governor Jay Inslee and other Washington Democratic leaders took aim at Donald Trump on the eve of his Washington visit.

“Your hate is not welcome in our state,” said the Governor at a news conference Friday afternoon held at El Centro de la Raza.

“Donald Trump is running a dangerous campaign. He’s putting forward dangerous policy proposals, and his dangerous rhetoric is actively harming families today in the state of Washington,” he continued.

Governor Inslee was joined by Congressman Adam Smith (D-9th District), along with Hispanic and Muslim community leaders across Seattle.

“If he’s coming to Washington State, we need to stand up and say we don’t want him here, we don’t want his hate speech anywhere in the United States of America,” said Rep. Smith.

“Your hate speech is a crime against our children,” said Estela Ortega, Executive Director of El Centro de la Raza.

“I think what you have to understand is the source. These are people who don't want a Republican for President,” said State Senator Don Benton of Vancouver, Donald Trump’s State Chair.

“He never has and never will support the citizens of this state who want to destroy ISIS and fix our economy,” says Hutchison.

So does Fernando Mejia, but to protest outside.

Mejia estimates dozens, if not hundreds, of people from King County plan to make the trip north for what they hope will be a peaceful demonstration.

“In some ways we want to engage with people who are planning on going to see Donald Trump and have a dialogue, why do they want to support Donald Trump when he’s dividing the country,” says Mejia.

“We want to keep it super peaceful. At the end of the day, we’re a country of immigrants and refugees and that’s the message I want to send,” he said.

Meanwhile, the campaign is working with secret service, local police and sheriff’s agencies to keep the area around the fairgrounds safe.

“We’re going to work with our local law enforcement to create a secure environment that will allow people who want to protest peacefully to have their say, but also make sure that we’re taking care of the security of people who want to hear Donald Trump speak,” said State Senator Doug Ericksen (R-Ferndale), working on behalf of the Trump campaign.