Many leaders in western Washington said the guilty verdict for Derek Chauvin is a step in the right direction towards racial justice, but there's still more to do. 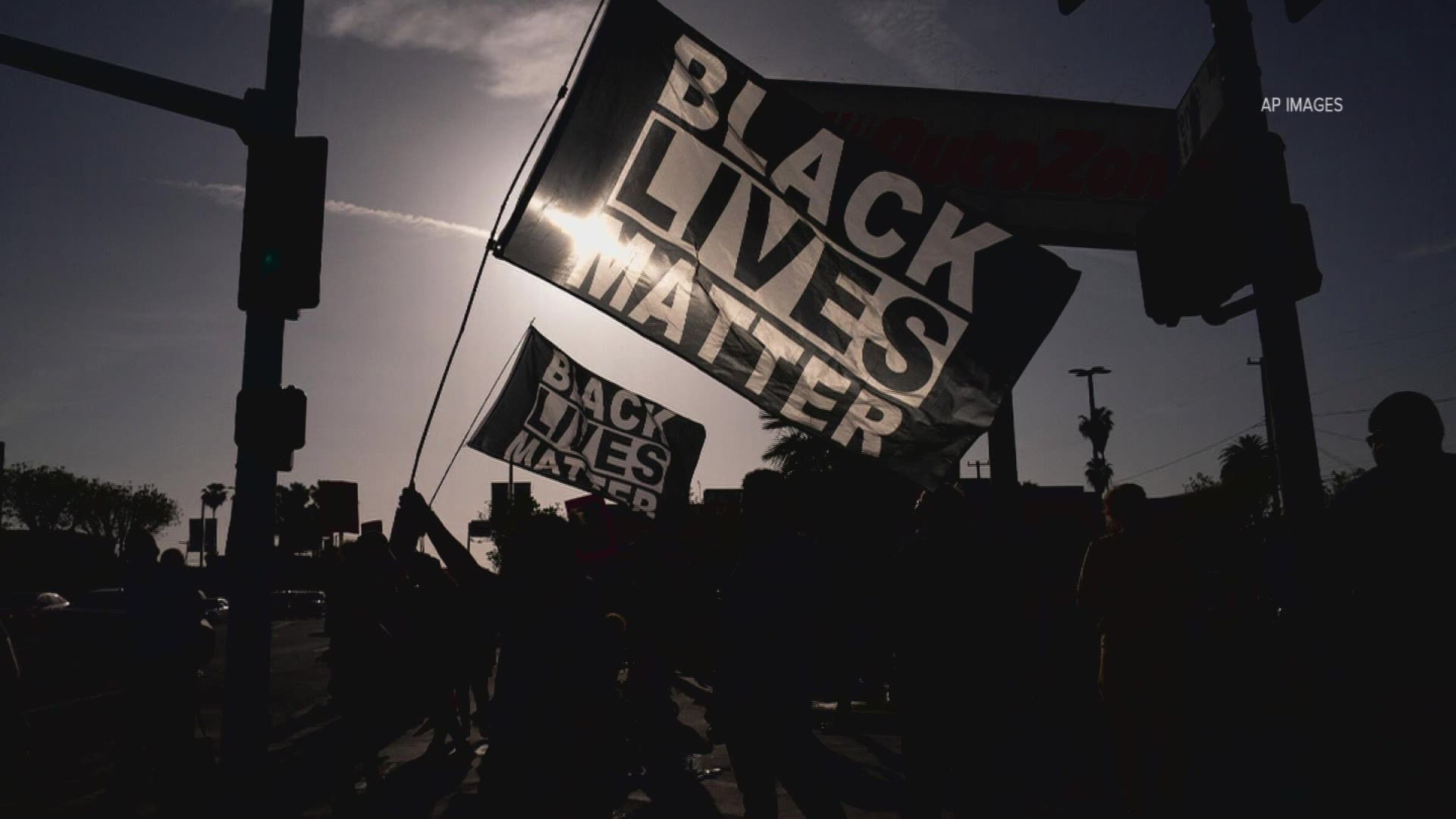 SEATTLE — Seattle leaders are calling for peace and calm in the wake of a jury finding former Minneapolis police officer Derek Chauvin guilty on all three charges in the death of George Floyd.

Chauvin was found guilty Tuesday of second-degree murder, third-degree murder, and manslaughter in the death of Floyd on May 25, 2020. He is expected to be sentenced in the coming weeks.

Floyd’s death last year sparked global protests over systemic racism and police brutality. Some of the demonstrations turned violent, including in Seattle, with demonstrators setting police cars on fire and damaging downtown businesses.

Seattle Mayor Jenny Durkan, Interim Police Chief Adrian Diaz, and other city and faith leaders held a press conference Tuesday following the verdict of Chauvin. City leaders said they want community members to come out and have a space to grieve and honor Floyd, but encouraged people to do it safely.

Diaz said officers will be out in Seattle Tuesday night ensuring community members stay safe and properties are kept secure.

"I ask that these gatherings be safe and peaceful. We can acknowledge justice, we can demand justice, and we can do both while respecting the rights and safety of others... I ask for peace, I ask for calm," said Diaz.

Rev. Dr. Leslie Braxton of New Beginnings Christian Fellowship also spoke Tuesday and said this is a moment for the community to move forward together.

"Let us tonight exhale, celebrate if you must, but let us do it with a sense of dignity," said Braxton. "Our city has been traumatized enough. We’re trying to rebirth. There’s no reason for anyone to burn anything, to loot anything, to be unnecessarily confrontational, let tonight be the beginning of a better way forward together. And if we can do that, then maybe this God-awful moment can be a seed toward a harvest of justice and real community – including police and people."

"I feel as though justice was served exactly how it should’ve been," Zartman said in a statement. "It didn’t take the jury much time, because they knew that what happened was wrong and unnecessary, and that the direct actions of Derek Chauvin are what killed my cousin George. I pray that this breakthrough in police accountability will allow for others without such blatant evidence to still get convictions and that police stop killing innocent people. I pray that my cousins soul may have some sort of peace, as his life was robbed from him. I pray that the changes come soon so this never has to happen to another person."

Rep. John Lovick, D-Snohomish County, was first elected to the legislature in 1999 and was the only Black member of the House.

"It's very emotional for me," said Lovick regarding the Chauvin verdict.

He has a unique perspective on race and law enforcement, having served as a state trooper for decades before becoming Snohomish County's Sheriff.

"It's so unfortunate that we had to take sacrificing the life of a man to really bring some truth and some justice to where we are, where we need to be," said Lovick.

He has worked to pass bills to change the way police can do their jobs in Washington state this legislative session, supporting bills to limit police use of force and banning tactics like chokeholds and neck restraints.

"What can we do to make sure that those who do not trust the system will trust it now? And maybe we are going to get there with some of the legislation we're working on and this verdict," said Lovick. 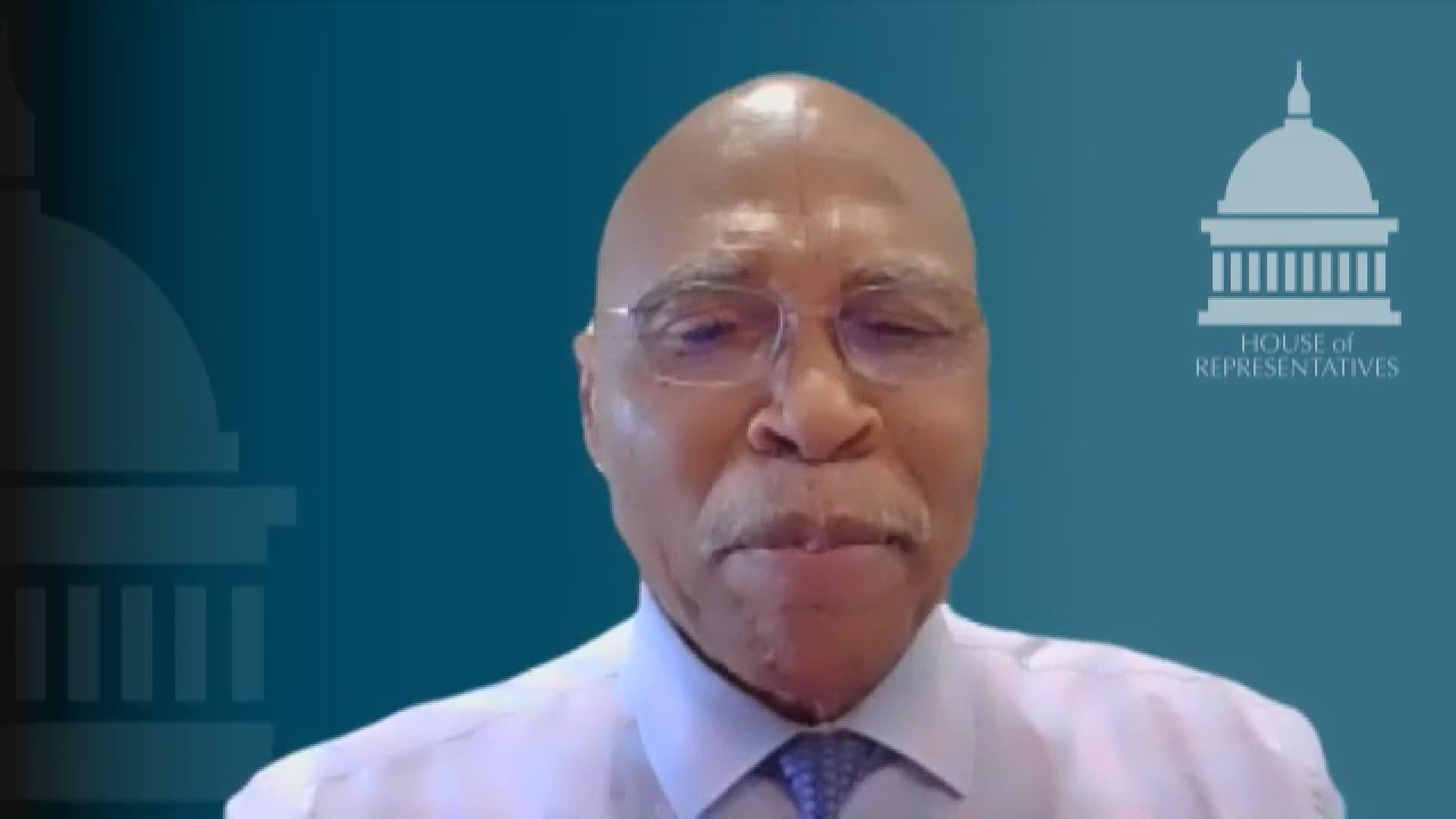 KING 5 Political Analyst Ron Sims, who is also a former King County executive and member of the Obama Administration, said he "almost cried" when he learned of the Chauvin verdict.

"I almost cried. After all these years, all of a sudden I saw justice rendered on TV... When the verdict came in I was absolutely overwhelmed, that finally in my lifetime there is an event that will be so powerful that it will effect systems all over the United States and we will truly know that justice can be rendered." 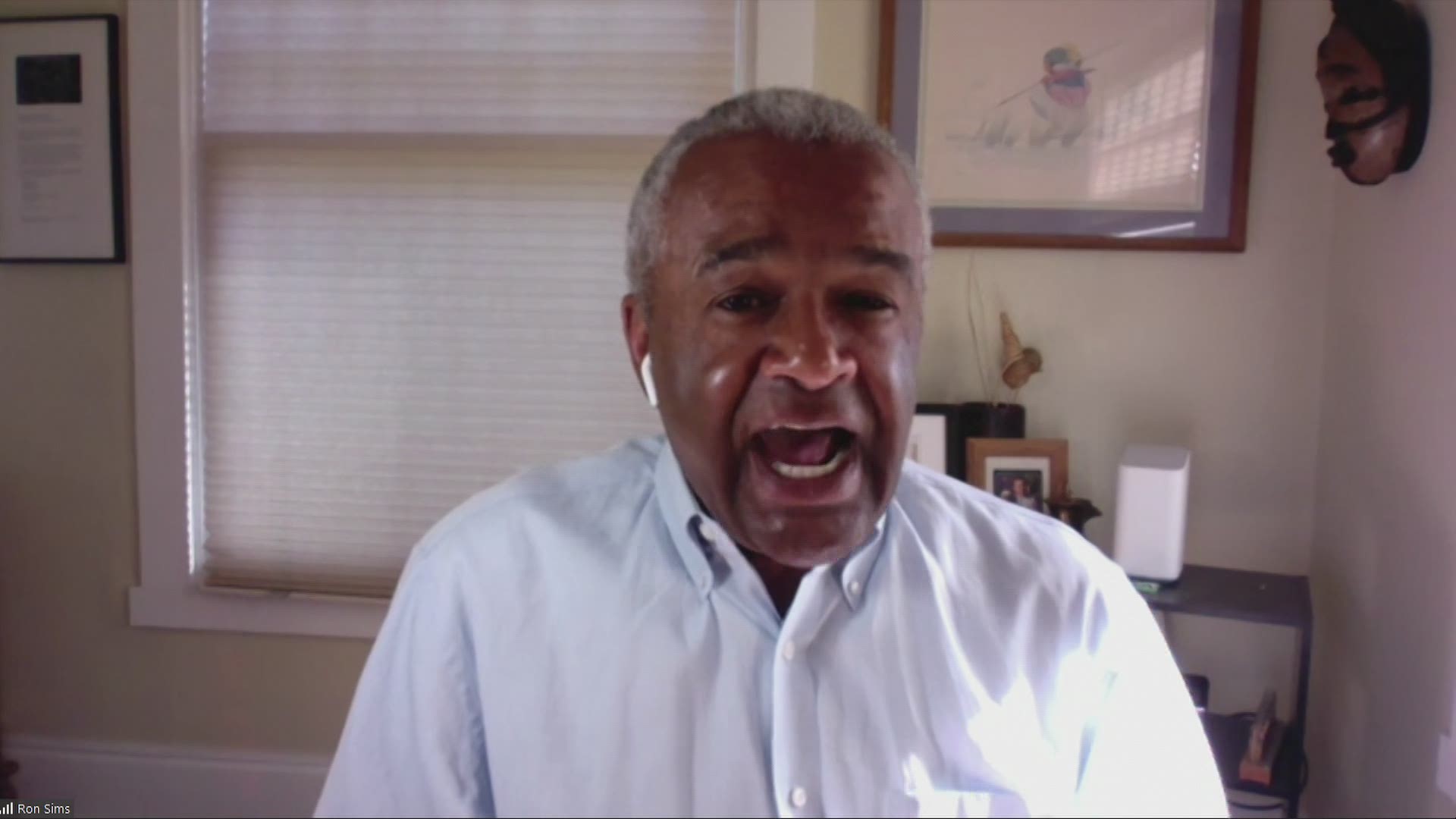 Larry Gossett, a long-time member of the King County Council and part of the “Gang of Four” that fought for civil rights in Seattle in the 60s, said he was relieved to hear the guilty verdicts, but also marks an important distinction between accountability and justice in a case like this. Justice, he said, cannot really exist for George Floyd because he can’t be brought back. But the officer now convicted of murdering him can be held accountable – an important step.

“A guilty verdict in the Derek Chauvin case does not mean that America has all of a sudden rid itself of racism, as it relates to criminal justice issues,” Gossett said. “The reason that I say that is that one case out of many, many hundreds of cases that have happened and many others, if history is a guidepost, that are likely to happen in the future. That's not going to resolve the problem. We need to have federal laws change and relationships to police reform throughout our nation.”

Gossett hopes this verdict will be the foundation for systemic change in the way police interact with communities of color, and would like to see federal policing reforms.

In Tacoma, community organizers say now that the verdict is in, the focus turns to Washington leadership to see what's done here. Activists say that Floyd's death is eerily similar to the death of Manuel Ellis, who was killed last March while in police custody. Video footage of that night also shows Ellis pleading with officers and saying, "I can't breathe, sir."

Organizers say they would like to see an indictment against the officers in the Ellis case.

"Too often we give them a pass," said Seven, minister of defense for the Black Panther Party. "It's like a badge gives them license to kill when there are other nonlethal ways to deal with an individual. When you have five or six people on one person, how do you feel threatened?" 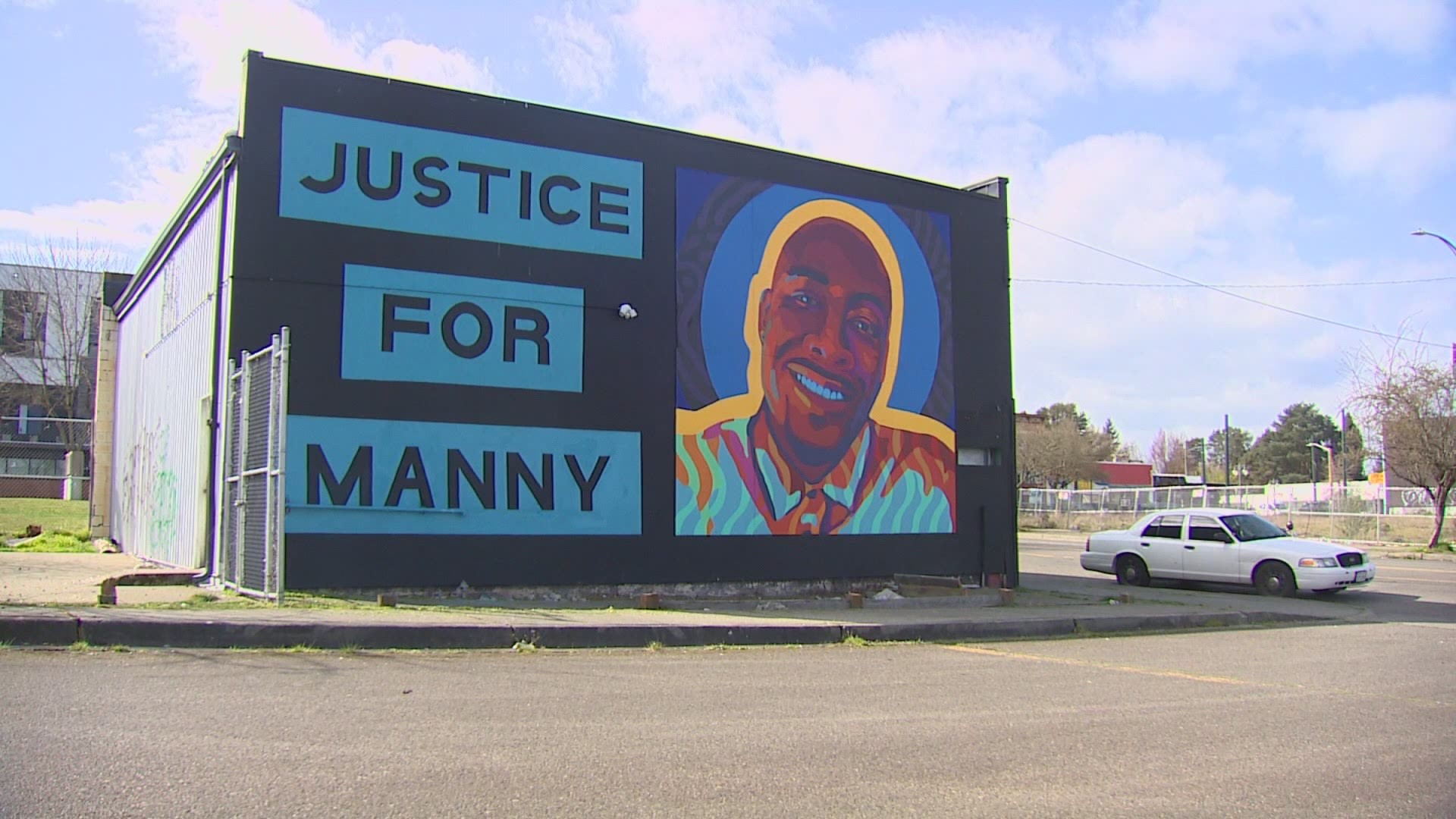 TraeAnna Holiday of King County Equity Now described an emotional release when the verdict was read.

“It was a huge sigh of relief,” she said. “It was like going through it and you’re like can I breathe, can I breathe, and then ‘guilty’ on all three charges. Woosh. A big outpouring of breath. And really it just felt like the knee was lifted off of all of our necks just slightly.”

She said there is obviously more work to do in dismantling systemic racism in the U.S. beyond this verdict, but said she will still celebrate the 12 jurors in Minnesota getting it right.

She also reflected on the impact and importance of people raising their voices to speak out against injustice, both in Seattle and across the country, which saw massive protests in the past year.

“As we celebrate the moment, we also understand in terms of where we are as a nation,” Holiday said. “That it’s still going to require more and more for those on the ground to continue to press. It’s not something that we can do right away, it’s something we have to kind of celebrate momentarily and then continue to do the work.”

Carolyn Riley-Payne with the Seattle King County NAACP said Tuesday's verdict was a little bit of hope, but that there is still more work to do.

"I felt as a country, we could exhale just a little bit. We have been holding our breaths for a long time, for several weeks now. But even longer than that," said Riley-Payne. "And what today's verdict did was bring back a little bit of hope for a lot of people, the disenfranchised, the distrust. I think that I just want people to, to really remember that this is just one verdict. And it came after a lot of pain, and it came after a lot of killings. And we have to make sure now that it doesn't happen anymore."

RELATED: VERIFY: What's next for sentencing of Derek Chauvin, and what the maximum penalty could be