A Seattle resident captured an usual sight on camera Sunday afternoon: a funnel cloud over the city's Ballard neighborhood. 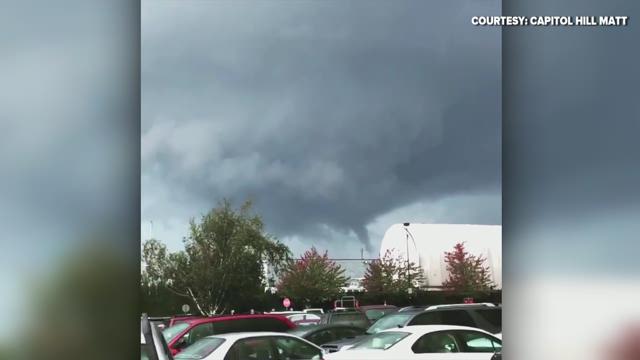 A Seattle resident captured an usual sight on camera Sunday afternoon: a funnel cloud over the city's Ballard neighborhood.

Twitter user Capitol Hill Matt said he spotted the cloud while he was in the Fred Meyer parking lot.

Hey @NWSSeattle - caught this over in Ballard around 12:30pm. Radar was showing a decent cell moving NE at the time.... made for great video. 🌪 #darkclouds #rotation pic.twitter.com/0x8NI2E5bq

If you're wondering if a funnel cloud in Seattle is a rare occurrence, here are a few facts.

First of all, we call this a "funnel cloud" because it did not reach the ground. In order to be classified as a tornado, it has to reach the ground. Yes, we can get tornados in Western Washington, but they are very rare.

On average only three a year occur across the entire state and are usually in the weaker EF 0 to EF 1 category, meaning winds from 65 mph to near 100 mph tops. The big EF 5's in the Midwest can produce winds up to 200 mph.

Tornadoes are spawned by their parent thunderstorms, and because we experience far fewer and weaker thunderstorms in the Northwest, our tornado threat is also much lower. Thank the Pacific Ocean for a moderating, cooling and damping effect on the types of thunderstorms we experience. All that "cool" ocean air is bad for exciting weather.