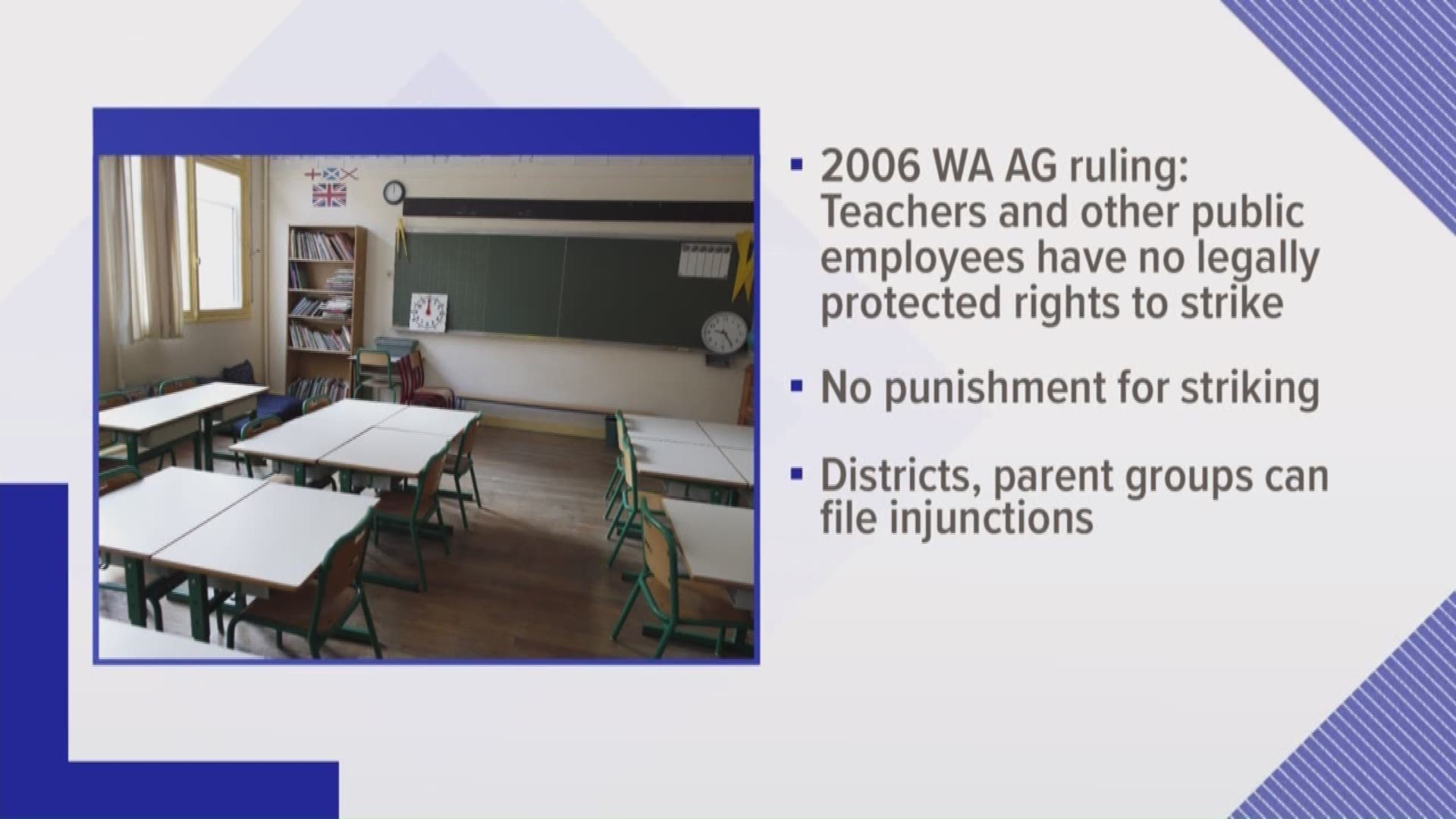 Tacoma Public Schools will not open Friday as the strike continues.

Dan Voelpel, spokesperson for Tacoma Public Schools, says the district is working as fast as possible on a deal with the teachers union.

"It's a struggle for families, we know that," he told KING 5.

The Tacoma Education Association announced this week that no tentative agreement was reached with the district and teachers would officially strike on the first day of school.

Classes were canceled and all school activities and events are also postponed while teachers strike. However, high school athletics will continue.

Free meal service for all Tacoma students started Thursday, September 6. The Tacoma School District will offer free breakfast and lunch at these times and locations.

The district is working with partner organizations on childcare options. Metro Parks Tacoma announced free day camp for all Tacoma students, but the camps quickly filled up. Check here for waiting list info and more childcare options in Tacoma.

RELATED: No school Thursday for Puyallup, Tukwila, 4 other districts

More than 2,000 Tacoma Public School teachers voted in favor of the strike Tuesday, that's 93 percent of the Tacoma Education Association.

"This is a huge deal. This breaks our heart that it comes to this, that we have to have our people walk off the job to let the district know what we want, what is supposed to be ours. They don’t get to keep our pay increases and funnel them into different accounts. They need to give my members' money that they have earned,” said Angel Morton, President of the TEA.

Grant Ruby is a teacher at Lincoln High School. He said, "Their offer is essentially taking away option hours that we use for professional development to go to various trainings. They want to roll that into our base salary and then require us to go to 4 or 5 more days of work."

Ruby continued, "They’re effectively giving us a pay decrease. They’re trying to wrap it in a bow, but essentially it’s a box of some smelly stuff with a bow on it. The way that they’re selling it, is that it’s a 7 percent increase or something like that. But in reality, it's not an increase at all. It’s the money that we were getting anyway with extra work days.”

Teachers are expected to report to work Wednesday to wrap up meetings. They plan to walk off the job Thursday, which was the scheduled start of the new school year.

There are 2,450 members in the Tacoma Education Association. Tuesday's meeting was attended by 2,217 members, with 93 percent of the votes in favor of a strike.

Tuesday's vote comes after Tacoma teachers previously failed to meet the attendance requirement to vote on a strike Aug. 29.

In the wake of McCleary, a state Supreme Court decision to fully fund public schools, Tacoma teachers are asking for raises in a district that has historically struggled.

RELATED: What is McCleary?

The district says it is facing a $25 million dollar budget deficit next year, and every dollar added to the package for teachers and other employees increases that deficit. The latest district offer to teachers would increase that expected deficit to $32 million, the district said.

TPS says it is restricted in how much of a raise it can offer teachers, because the funding law approved by the legislature limits pay hikes in districts like TPS to no more than 3.1 percent for 2018-19.

No school Wednesday for six districts in Western Washington

“As it stands right now, Clover Park, Fife, South Kitsap, they all are offering $10,000-15,000 more for the same work,” said TEA President Angel Morton. “Historically, Tacoma has been the highest paid in the area the last couple years. We’ve been chipping away at that and the last couple of years the districts have been catching up or surpassing us.”

Voepel said the district is looking for a realistic deal based on the funding it has.

“I think everyone knows by now that Tacoma got shortchanged by this new funding formula and we have far less than other districts to work with and we’re willing to give what we have to give,” said Voepel.

“We’ve prided ourselves on being one of the highest paid school districts in the region that’s allowed us to create a great workforce of teachers very talented the most talented in the region dealing with a really incredible student population so to have that put at risk because this funding formula gives much more to other districts than it does to us that’s very frustrating to us," he said.