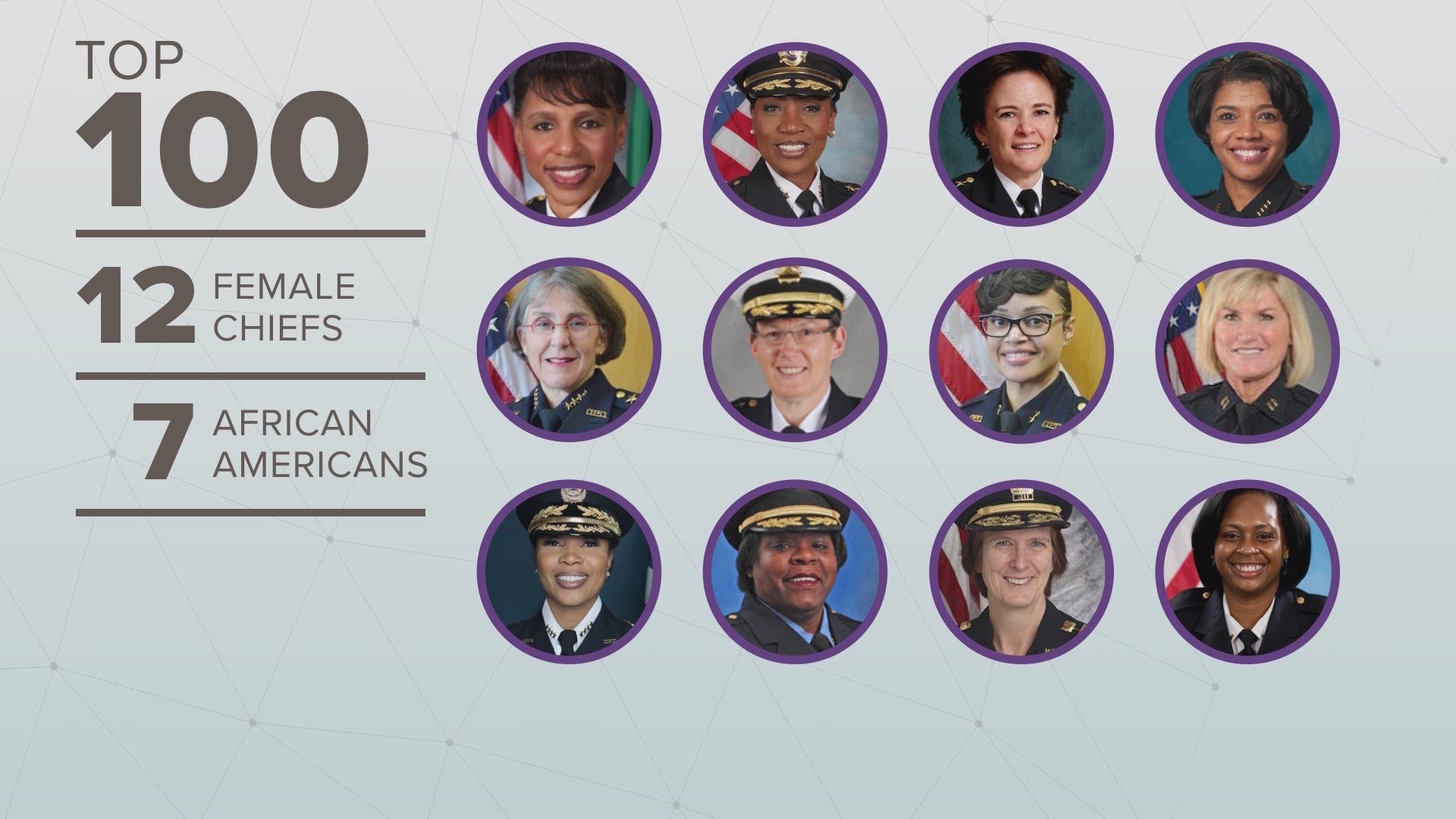 SEATTLE — Carmen Best, if confirmed by Seattle City Council, will become one of a dozen women leading police departments in America's 100 largest cities.

The interim Seattle police chief, whom Mayor Jenny Durkan tapped for the permanent job Tuesday morning, would also become the first black woman to lead the department as chief.

"I'm encouraged to see the growth of women getting jobs in that top executive decision-making chair," said Val Cunningham, executive director of the National Association of Law Enforcement Executives. "It's better than it used to be, and I want to see it grow and double—and maybe even triple."

A KING 5 analysis of police leadership in the nation's 100 largest cities found that women are still largely underrepresented in the top law enforcement role.

"Women do police differently than men. They use more communication skills rather than physical skills," Cunningham said. "Women are more inclusive in their team building —in their collaboration. They obviously complement in a male-dominated field to have a diversity of thought around the table."

With Best's appointment, Seattle will join just 11 other cities—including Atlanta, Dallas, Portland and Honolulu — that have embraced women as police department leaders. Seven of the women in the top spots are women of color.

"It's absolutely not enough. We should have women in our police departments in leadership positions that reflect the number of women in our society," said Jacqueline Battalora, a criminology professor, anti-racism expert and former Chicago police officer. "They also need to reflect the cultural, racial and religious diversity that is in this country."

Of the 88 men who are currently leading police departments in the nation's largest cities, the KING analysis found that 52 of them are white. Twenty-five police chiefs are African American men, and 11 of the men are Latino.

The lack of diversity isn't a new problem. Police agencies of all sizes have historically not been successful in recruiting and hiring people who reflect the communities they serve, according to a 2016 U.S. Department of Justice report. The report, which focused on advancing diversity in law enforcement, concluded that improving diversity within police departments is critical to building public trust.

Against the backdrop of simmering national tensions between police and communities they protect, experts say diversity at the top can do a lot to bridge the divide.

"Particularly in our communities of color, relationships with law enforcement have deteriorated the most over time," Cunningham said. "So I think when they see a female of color —somebody that looks like them —in a position of authority that will work with them and sit down and solve problems together, I think that's a tremendous asset."