Fear of flooding has Washington town mulling a move

The mayor of Hamilton, Washington wants to up and move the town center to avoid future flooding. 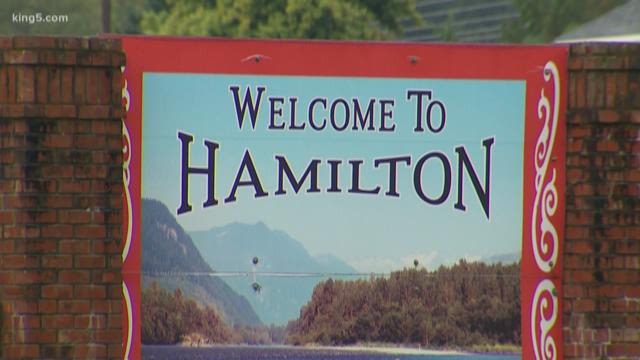 Hamilton, Washington has a history with floods that runs nearly as deep as the town itself. Founded in 1877, it's first major flood was just 20 years later.

On average, the town experiences a significant flood every 3.5 years. Now some say it's time to head to higher ground.

With winter looming, Jane Zillig can't help but think about flood season and how bad it can be in Hamilton. The flood of 1990 was the high water mark for her.

"It was really bad," she says. "We got in our canoe and paddled around looking to rescue any pets or do anything helpful that we could."

Settled on the north bank of the Skagit River, Hamilton's population has stayed pretty much the same for years. 300 people inhabit the mill town. 200 of them live in the flood zone.

In 2003, waters ran four feet deep through downtown. The high water mark for that flood is cut into a post inside Boots Bar & Grill.

Now some residents think it's time for the town to move.

"There just isn't a way to protect the town," says Mayor Joan Cromley. She's seeking a $1.5 million state grant that would allow her to begin planning the process.

The idea is to move the town center and the 200 residents in the flood zone to homes on drier ground. Willing homeowners would be bought out and moved into new houses. The Skagit Land Trust has already purchased property in the area. Seattle-based non-profit Forterra is also considering a large land buy.

Cromley says the town is stagnant and regular floods are keeping it from growing, despite a vibrant mill nearby. She worries that without a move, the population will continue to dwindle, putting its very existence at risk.

"If we don't find a place to continue to grow, eventually this town will be no more," says Cromley. "Considering our very long history, we want to be able to stop that and start going in the other direction."

Cromley says if a relocation happens, it is likely decades away.