The Mueller family lost about 90 percent of their possessions when a tornado hit Port Orchard last week. But the family will count this as one of their best Christmases ever. 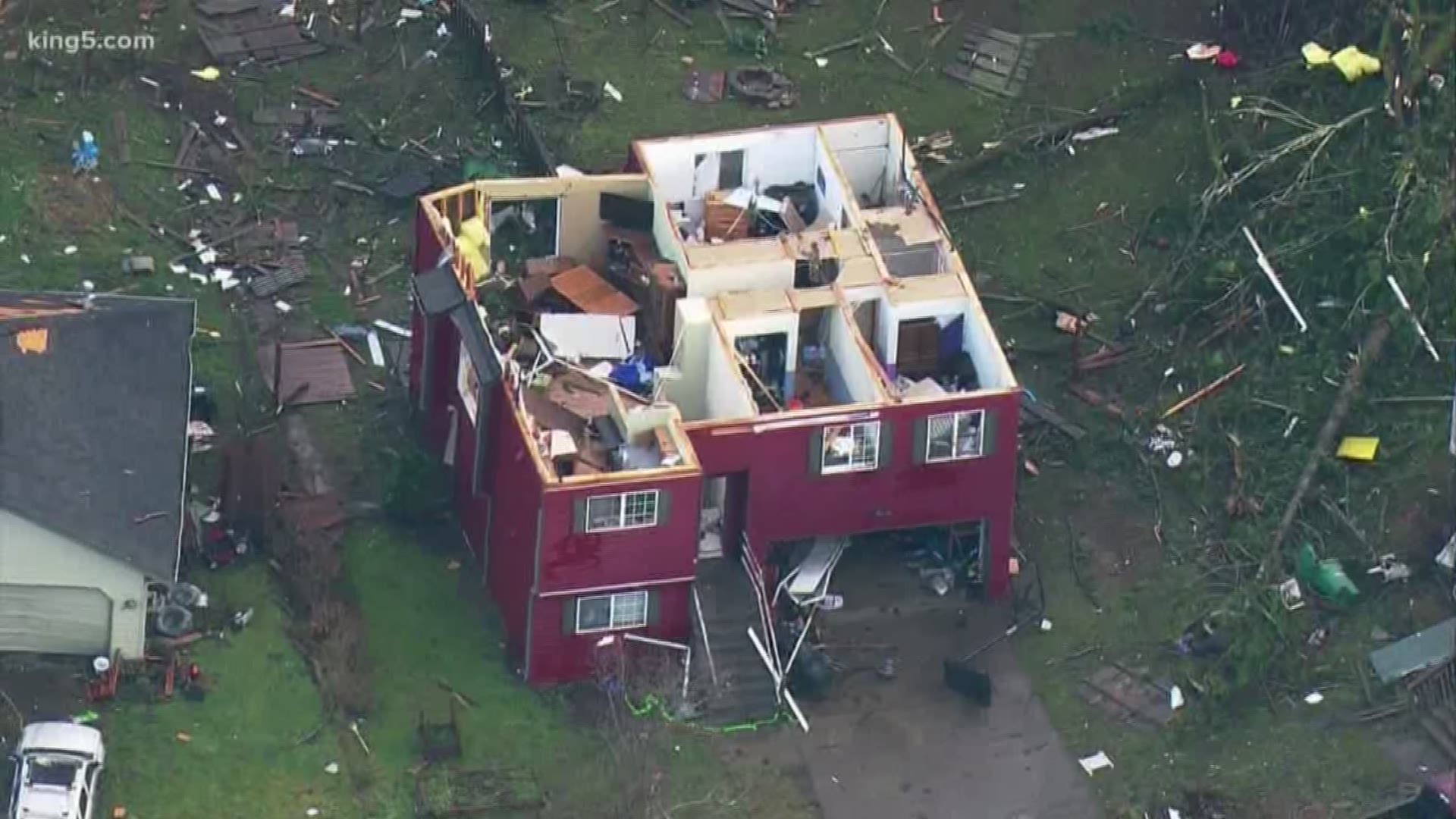 PORT ORCHARD — The presents John Mueller and his family salvaged from their tornado-ravaged home were mostly a disaster, the wrapping and boxes disintegrating in their hands, many items damaged or destroyed. But the Mueller family will count this as one of their best Christmases ever.

"I have my family still, I have my daughter, my son. My family made it out alive. That's all that matters," John Mueller said Friday, speaking by phone from his driveway, where cadets from South Kitsap High School's NJROTC were helping clear debris. "The community has shown me amazing support, and it's also our neighbors as well."

The Muellers' red home, gaping without a roof, became a familiar sight Dec. 18 in media across the country following an EF2 tornado, packing winds around 120 to 130 mph that ripped through a neighborhood off Bethel Avenue behind Port Orchard's Walmart.

Beth and John Mueller were at work at Puget Sound Naval Shipyard when the twister hit. Their son Nick Watson, 17, and Jasmin Mueller, 16, were at South Kitsap High School, where the school day was ending. Students were held at school while staff assessed the safety of roads and neighborhoods.

The family's pets were home. Three dogs, two of whom were kenneled, all survived. Their cat at first could not be found. They located her hiding under a bed upstairs.

"They're all fine. They're sticking to us like glue," Mueller said. "They're still traumatized."

A pet rabbit also rode out the twister on the second floor.

Despite a path of destruction 1.4 miles long and up to 300 yards wide, no major injuries or loss of life occurred as a result of the tornado, public officials said.

The Muellers' home was one of 20 that were "red-tagged," deemed unsafe, as of Friday. Another 28 homes were "yellow-tagged," with significant damage to the structure.

Finding a place to lay their heads

A Red Cross shelter at St. Gabriel Roman Catholic Church that opened the day the tornado hit closed Friday, as families and individuals who were displaced had all found accommodations, said Betsy Robertson, spokeswoman for the American Red Cross, Northwest Region.

Beth and John Mueller are being put up at a local hotel. Their teenage children and pets are staying with their adult daughter, Hannah Mueller, who lives in Mariner's Glen apartments. The rabbit is being cared for by a friend from church. 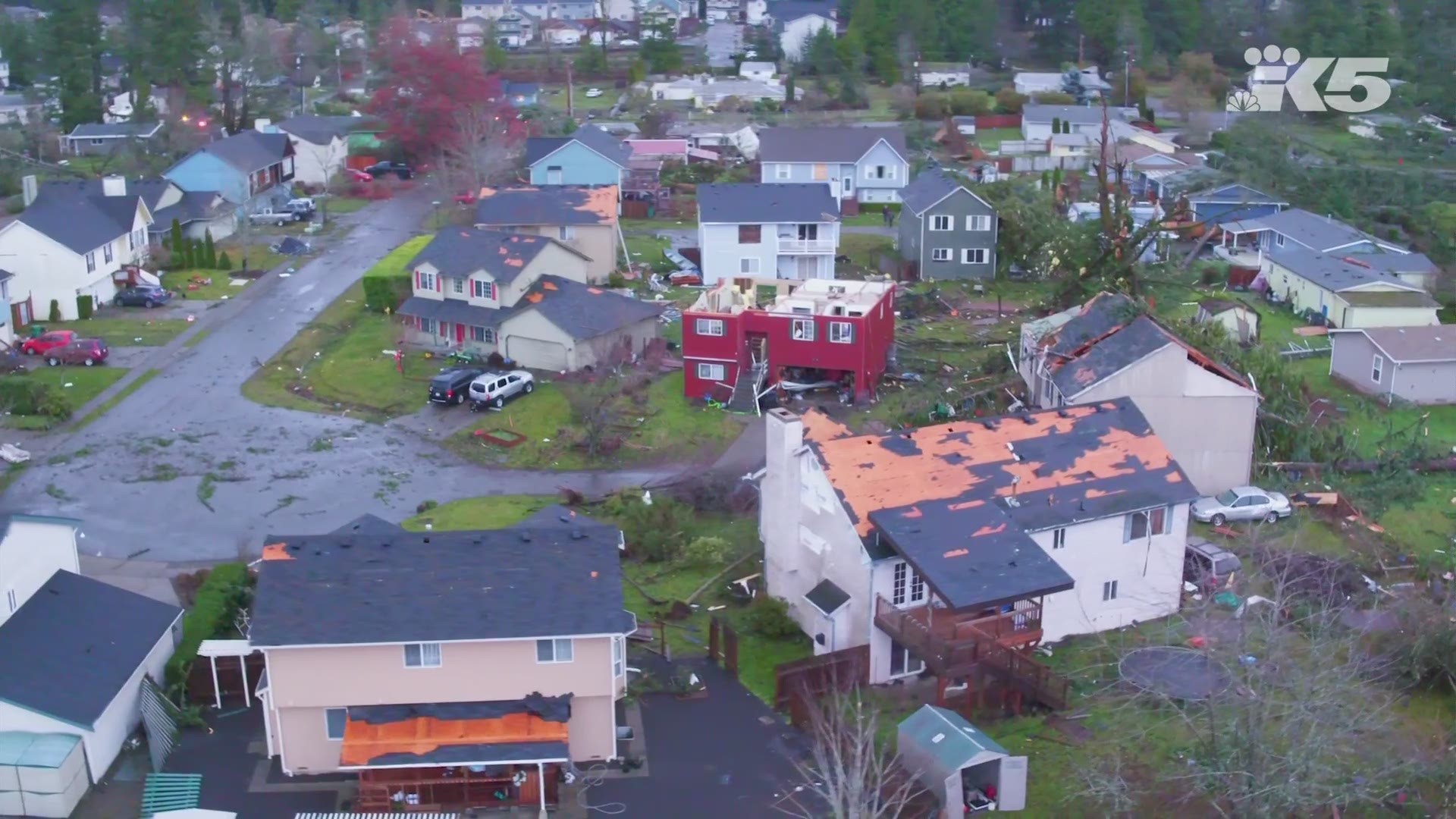 "We're split but we come together every night for dinner at my daughter's house," Mueller said. "It's a time to decompress with everybody. It's a time for us to say what happened today and reflect on the day."

The family lost about 90 percent of their possessions. They were able to salvage a few personal items, including some cherished mementos, before the Kitsap County Fire Marshal on Thursday declared their home off limits for entry, given the safety hazards.

Federal disaster aid likely won't be issued to victims of the Port Orchard tornado. The Muellers, who owned their home and were insured, will be able to rebuild, John Mueller said. Every day their to-do list on the road to putting their lives back together gets longer.

The emotional toll of disaster

People who experience a natural disaster typically ride a roller coaster of emotions, grateful to be alive one moment, despondent over their losses and overwhelmed with the tasks of recovery the next, Robertson said. One of the roles of the Red Cross is to provide support to people who are struggling emotionally.

"People immediately go into survival mode. Then the reality starts sinking in," Robertson said. "It's a process. It's an evolution, and we want to make sure we're there for people emotionally throughout. They should not feel like they're alone or have to deal with it alone."

A disaster close to the holidays adds extra stress, she said.

"Be patient with yourself and others," Robertson said. "It's common to have any number of temporary stress reactions such as anger, frustration and anxiety."

RELATED: How to help after Port Orchard tornado

Mueller said the overwhelming support his family has received from extended family, friends, church and community members is helping the family cope.

"We're not victims," he said. "We're a family who happened to be in a small situation."

The Christmas gifts — some of which were for charitable giving at church — can be replaced. The Muellers will celebrate on the day after Christmas, joined by daughter Amber Watson, 19, who lives and attends college in Bellingham.

And they'll have a place to cook and celebrate other than Hannah's small apartment. Beth's grandmother Lavona Teays lives at Madrona Manor senior living apartments. The facility has made the community room available to the family.

"We're going to have a good meal together. We want to hug each other a little bit more. I think that's what's going to be special about it," Mueller said. "We know everything's going to be OK. We want normal. Is it going to be normal? Not a chance."

If you need help

The Kitsap County Department of Emergency Management's Community Recovery Center for families affected by the tornado that operated at Christian Life Center through Saturday is now closed. KDEM is working with families on an individual basis. If you need help, call 800-295-3717.

Impacted homeowners are also able to receive assistance free of charge with damage to their homes and property from Team Rubicon, which is coordinating volunteers offering help. Call 360-525-3717 or email joseph.crossgraves@Teamrubiconusa.org.

If you are experiencing emotional stress in the wake of the tornado, call the Substance Abuse and Mental Health Services Administration Disaster Distress Helpline, staffed 24-7, at 800-985-5990 or text "TalkWithUs" to 66746.