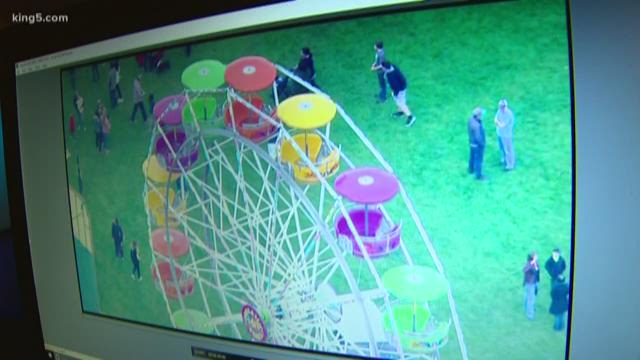 The family at the center of an amusement ride accident in Port Townsend has now filed a lawsuit against the ride's operator.

It was during the May 18 Rhododendron Festival when a Ferris wheel gondola suddenly tipped over and the three passengers riding inside plunged 15 feet to a metal platform below.

"I mean, this is very traumatic in the sense that I don't think life will ever be the same," said Attorney Ashton Dennis, who represents the victims. "Unfortunately with this family, they all experienced it in different ways."

59-year-old Shawn Swartwood, her partner, 47-year-old Crystal Groth, and their seven-year-old son were all hurt in the fall.

Swartwood's injuries were the most severe, and included facial fractures and two broken ankles. Dennis says she is still healing and dealing with limited mobility.

"It took at least six to eight weeks before she was even allowed to use one of her extremities at five percent capacity," said Dennis.

The lawsuit filed this week against Portland-based Funtastic seeks damages for pain and suffering plus medical expenses and lost income.

It alleges the company was negligent in the operation of the Ferris wheel and in the training of its employees. The lawsuit also accuses Funtastic of failing to have an adequate number of employees supervising the ride while it was in operation.

"This individual ride makes this company thousands of dollars a day, and so if you're going to operate a ride, whether it's a Ferris wheel or roller coaster, you need to do it safely," said Dennis.

But the lawyer for Funtastic maintains the ride was being operated safely.

"The Phoenix Wheel was not understaffed. Appropriate staffing is determined in part by passenger load. This incident occurred when Plaintiffs stood up in the gondola which was during a period of low passenger traffic when two attendants were more than appropriate and more than adequate to ensure safe operation," Attorney Pat Buchanan said in a statement to KING 5.

Buchanan says Dennis' clients were repeatedly warned to remain seated while onboard the Ferris wheel.

"This incident occurred when Plaintiffs stood up in the gondola," wrote Buchanan. "All of Funtastic's safety procedures were followed and there is nothing to suggest that additional attendants would have had an effect on what transpired, and indeed, the number of staff is irrelevant to the cause of tipping, which was Plaintiffs' standing up after expressly told not to."

Dennis strongly disagrees and said that kind of "victim blaming" is disappointing to hear.

"They say this was rider error, I believe was the language they used. And it's just flat not the case," he said.

The lawsuit also accuses the Ferris wheel operator of destroying evidence before lawyers for the victims' family had a chance to inspect the ride. Buchanan says that allegation is "patently false".

The filing of this lawsuit means the legal dispute will ultimately be decided in court. Court documents say Funtastic and its attorneys have between 20 and 60 days to formally respond to the allegations.

"It's just not acceptable," said Dennis. "And I don't think any jury is going to find that acceptable."