Family members to victims of the Las Vegas shooting recounted a night of terror, hoping to influence lawmakers. 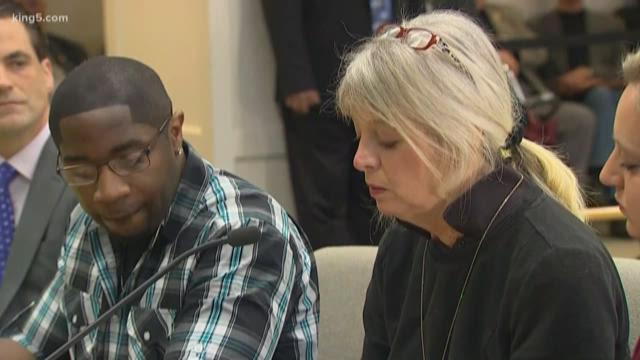 Hundreds of people crowded in Olympia on Monday, gathering in the Senate building for the legislative hearing on several gun safety bills.

Two families who testified shared a painful connection -- both had loved ones in the Las Vegas mass shooting.

"On October 1st of this year, my daughter Carrie Parsons was murdered in Las Vegas in the mass shooting," Ann-Marie Parsons of Bainbridge Island said before the state Senate's Law and Justice Committee Monday.

Parsons testified for Senate Bill 5992, which would ban bump stocks, a kit that converts a semi-automatic weapon into a machine gun.

Her 31-year-old daughter, Carrie, was one of 58 people who died in Las Vegas. The shooter was able to fire 1100 rounds in less than 11 minutes.

"Nobody was targeted," said Parsons. "They were all mowed down. Nobody stood a chance."

Outside the state Senate Cherberg Building, Parsons met a young woman who shared the same horror in October as her daughter but survived.

"Certain sounds freaked me out," said 29-year-old Alicia Johnston. "You're never comfortable in any situation you don't feel safe.

An emotional Johnston sat next to her brother as he shared her story.

"As they ran she was shot in the back," said Zach Elmore. "In the chaos, she was able to text my mom and grandma potential goodbyes and asked my grandma to tell her grandma she loved them."

The bump-stock ban was just one five gun safety bills discussed Monday. Others included SB-5463, regarding safe storage of firearms, and SB-6049 which would prohibit magazines holding more than ten rounds. SB-5444 would require enhanced background checks on assault weapons, and SB-6146 would allow local authorities to regulate firearms in their communities.

Gun rights advocates argued a ban would have little impact.

"A modification of a trigger itself to shoot fully automatic is already illegal," testified Phil Watson, of the Firearms Policy Coalition.

"I'm fairly involved in the firearms community," said William Burress, of the Gun Owners Action League. "I know two people in the state that have them."

Yet the survivors of the Las Vegas shooting argue it's already too late for them, but they're here hoping to change the future.

"We've gone through agony," said Jim Parsons, Carrie Parsons' father. "The reason why we're here is so other families, lawmakers, maybe your child, don't have to go through the same kind of slaughter and agony we've gone through."