Before Thursday's protest, someone smashed windows and scrawled graffiti on the storefront. It even appeared that someone shot his windows with a pellet gun. 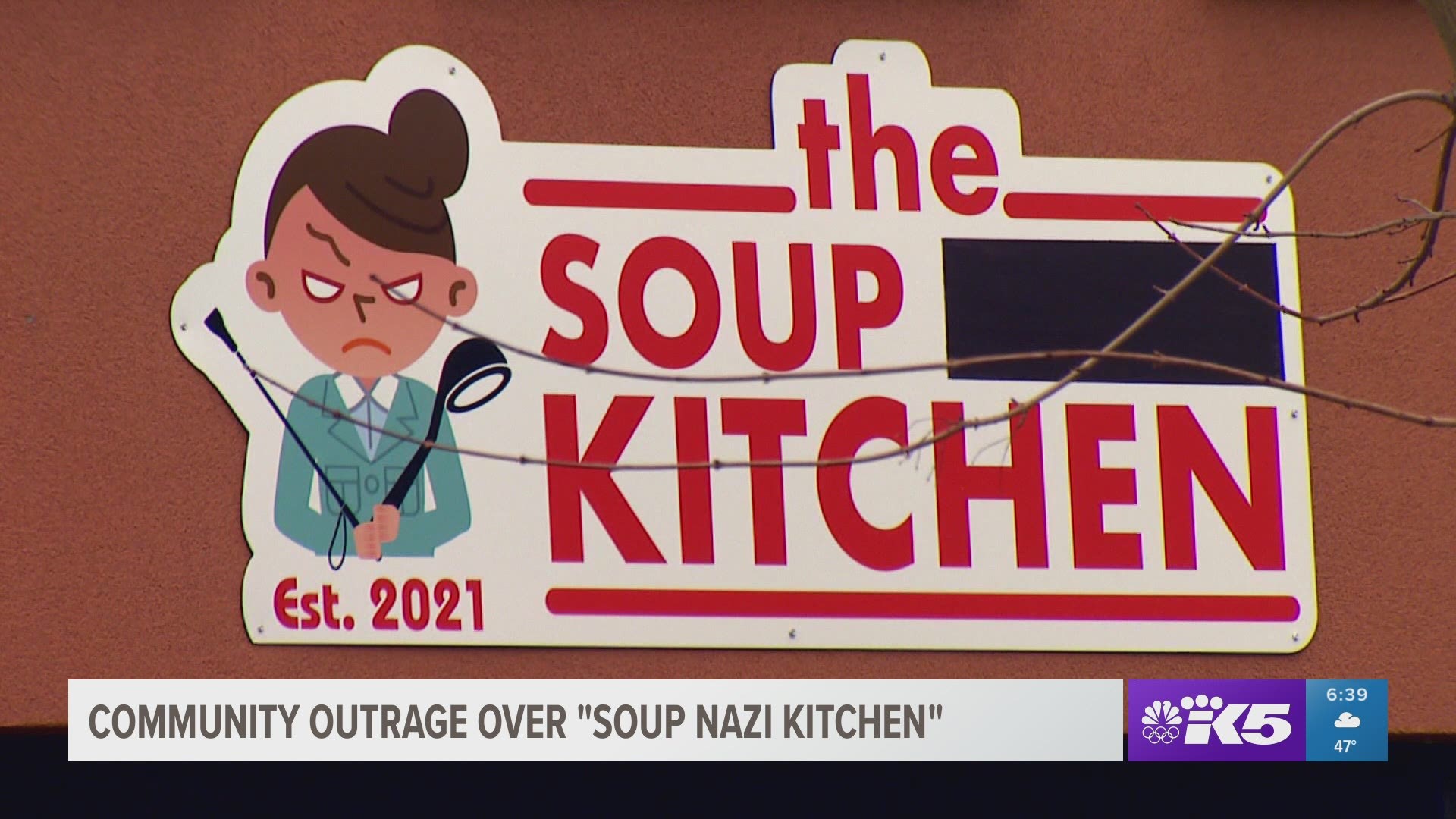 EVERETT, Wash. — The owner of what was formerly called "Soup Nazi Kitchen" is renaming his restaurant one day after unveiling his sign following outrage from the Everett community.

A small group of protesters gathered outside the restaurant Thursday telling the owner his business is not welcome.

"I think this business taking root here just sets a dangerous precedent for other businesses of this nature to market dangerous ideologies, and it's just not something we want here in Everett," said protester Natalia Tune.

"It definitely raised some pretty distinct alarm bells," said Miri Cypers, regional director for the Anti-Defamation League of The Pacific Northwest. "I don't think this was some harmless joke."

"We've seen a real prevalence of white supremacist activity in the Snohomish area. I think it's important for communities to hold people accountable."

Restaurant owner Andrew Ho told KING 5 he's no stranger to controversy, but the community's reaction went beyond what he expected.

"I've created controversy before so I'm used to it, you know, the degree of outrage was a little more than I'm used to but I have experience," Ho said.

Ho said that the name was inspired not just by the Seinfeld episode but also by his experience going into businesses during the pandemic. Ho also said he doesn't consider the controversy a bad thing but that he will not keep the name. He didn't say what he'd be renaming his restaurant.

In a blog post, Ho said he was standing up to censorship "before everything and everyone is canceled."

Ho added, "white supremacy is not on the rise" but nationalism is, which he called a "reasonable response to globalism."

Before Thursday's protest, someone smashed windows and scrawled graffiti on Ho's storefront. It even appeared that someone shot his windows with a pellet gun.

The word Nazi on the restaurant's sign looked to be professionally painted over on Thursday, but that didn't stop people from expressing their anger.

Everett Mayor Cassie Franklin said in a Facebook post that she is aware of the sign, but the City of Everett is restricted from taking any action.

A recent U.S. Supreme Court decision restricts Everett's authority to regulate the wording on the restaurant's sign and largely prohibits the city from banning signs based on hateful or offensive wording, Franklin wrote.

"However, we strongly urge and prefer that our businesses not use hateful, culturally-insensitive, derogatory or offensive wording or images in their signage or business materials," the Facebook post reads.

She added, "I will not be patronizing this business."