Dozens of western pond turtle hatchlings are swimming free, thanks to a program at the Woodland Park Zoo to save them from extinction. 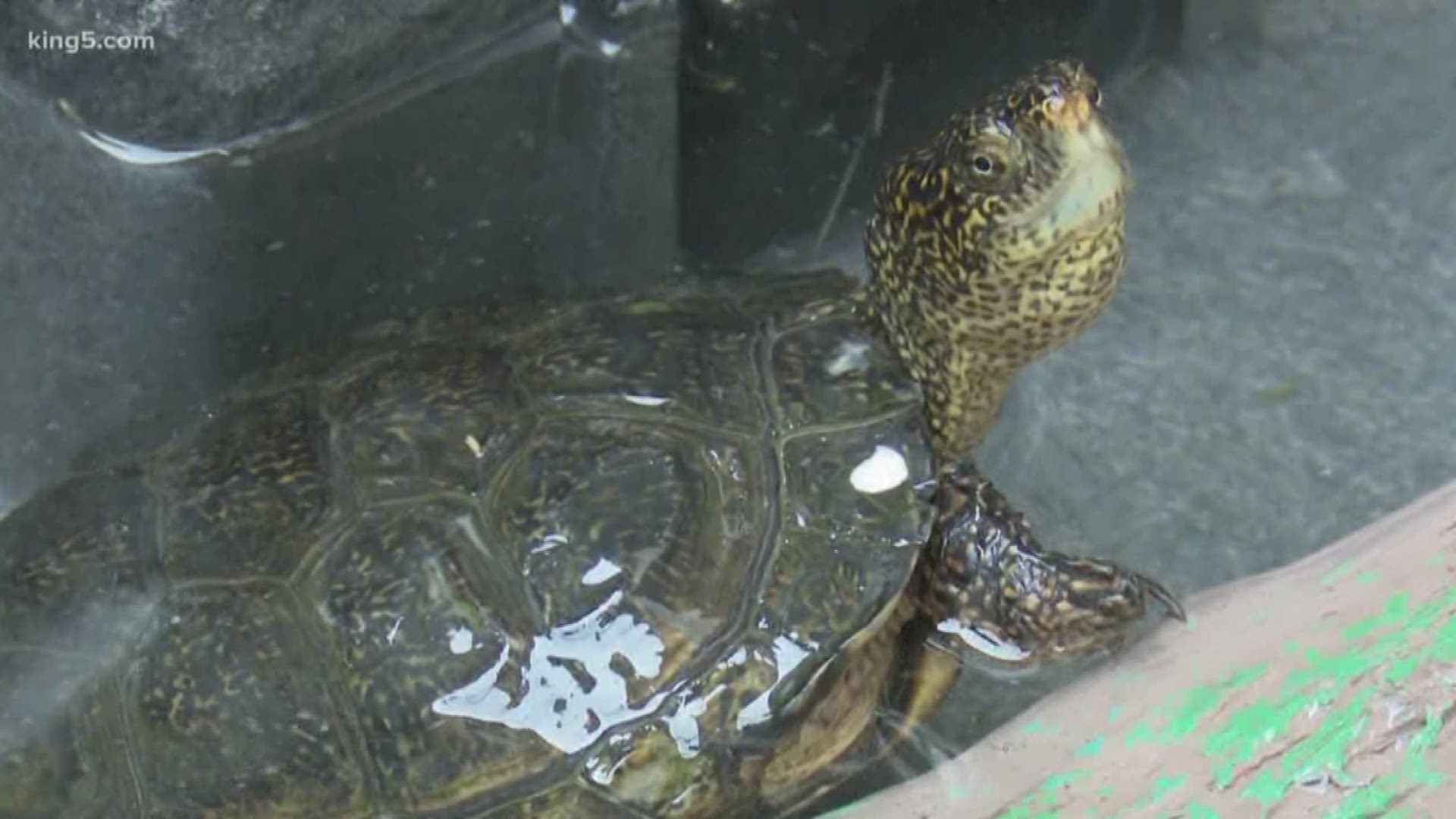 The hatchling release is part of a conservation effort by the Woodland Park Zoo and the Washington Department of Fish and Wildlife (WDFW). The program has brought the turtles back from the brink of extinction in Washington state.

In 1990, only about 150 western pond turtles populated the marshy ponds of Western Washington. Now, there are over 1,000.

Volunteers and staff are out at the Pierce County Western Pond Turtle Recovery Site every day from mid-May to mid-July, explained Emily Butler, the assistant district wildlife biologist with WDFW. They use radio transmitters and binoculars to search for female turtles out of the water and follow them to their nests. Once the mother has returned to the water, volunteers excavate the nest and bring the eggs to the zoo for their “headstarting” program.

In 1990, only about 150 western pond turtles populated the marshy ponds of Western Washington. Now, there are over 1,000. (Photo: KING)

Under this program, turtles spend the first year of their lives at the zoo. The conditions at the zoo allow them to remain active and feed through the winter. This means they can grow much faster than they would in the wild, offering them an important protection against invasive bullfrogs. An adult bullfrog is large enough to eat a hatchling whole.

“It’s like a mini quiche for a bullfrog,” said Jenny Pramuk, a curator with the Woodland Park Zoo.

Pramuk has been involved in the headstarting program for eight years.

In addition to bullfrogs, the western pond turtle has to contend with habitat loss, other predators, and competition with non-native turtles. All other turtles seen on this side of the state are introduced populations, explained Pramuk. Many of them were once pets who were released into the wild when their owners no longer wanted to care for them.

“Our goal someday is to have this [western pond] turtle be the one you see in Green Lake,” said Pramuk.

She estimates that 2,000 hatchlings have been raised at the zoo and released into the wild over the past 27 years, making it the longest-standing conservation program in Washington state.

The rehabilitation of the western pond turtle population has been so successful over the past three decades that the program is beginning to leave some turtle eggs to hatch in the wild. The nests are covered by wire cages that keep the eggs safe from predators.

The conditions at the zoo allow the young turtles to remain active and feed through the winter. This means they can grow much faster than they would in the wild, offering them an important protection against invasive bullfrogs. (Photo: KING)

Researchers plan to study how well the natural-born turtles fare as compared to the ones given a head start at the zoo. Right now, computer simulations show that headstarting is still necessary to sustain the wild population.

Dozens of people gathered for the release of the turtles, from zoo volunteers to local children. Pramuk compared the event to sending a child off to college.

“Today is the culmination of all that work,” she said. “It’s a great feeling.”