Ken Bellingham said he meant the cookie to be a joke - but it's stoking online controversy. 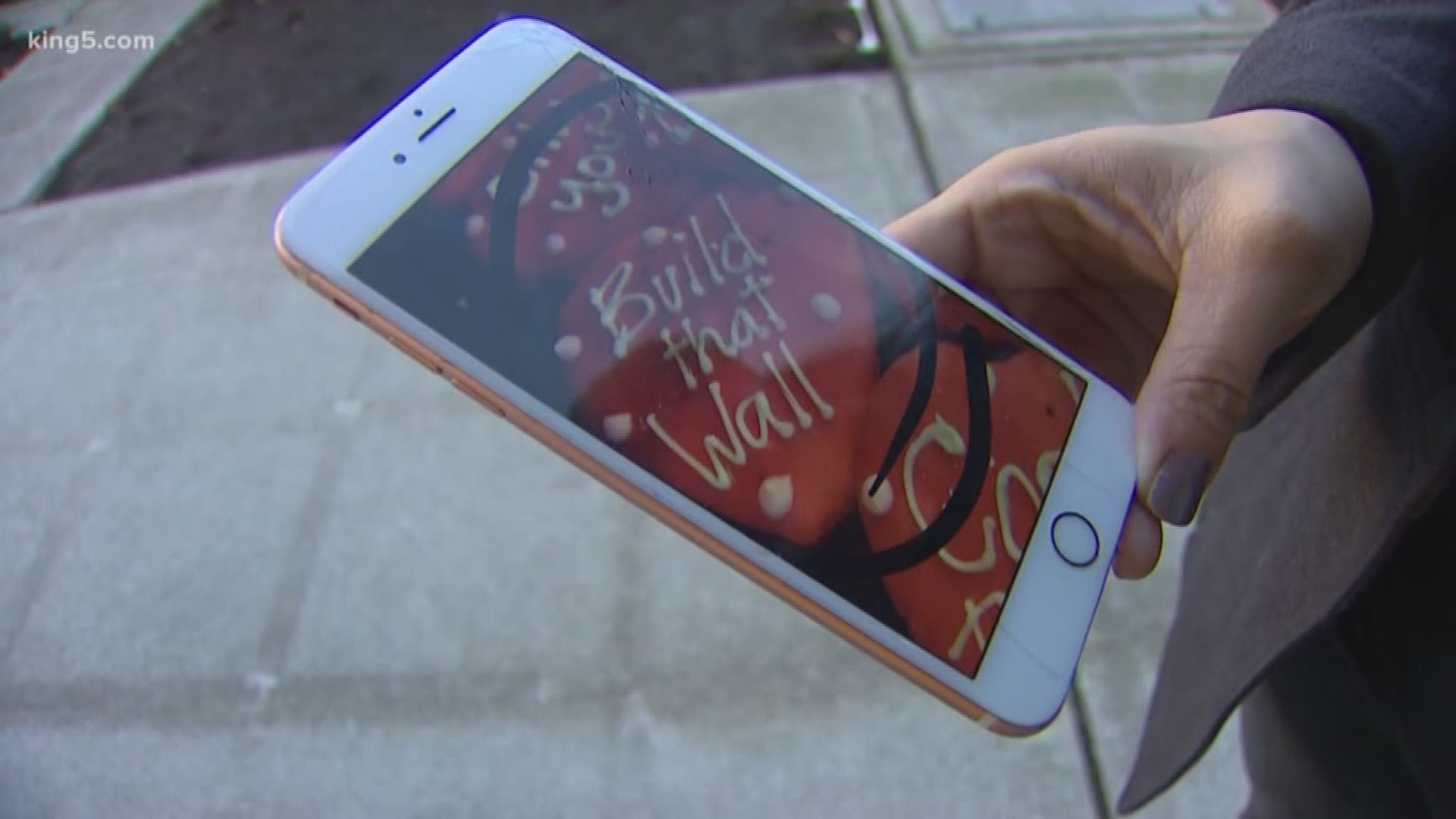 Ken Bellingham says he’s responsible for the cookie in question – a pink heart frosted with “Build that Wall.” The cookie was in his display case Thursday. He said he only made one of the design.

But he says he’s been making the style of Valentine’s cookies – some more suggestive than others – for years.

“Some are a little risqué, some are nice,” he said. “I’m back there trying to think of what to write on a cookie. I try to be funny.”

The "Build that Wall" cookie is getting more attention online.

Credit: KING5
The Build that Wall cookie on Carrera's phone. She snapped the picture Thursday.

“People were just going off,” Bellingham said. “They don’t know anything about me and supposedly I’m some horrible person.”

The issue began when Ana Carrera visited the store Thursday, took a picture of the cookie, and shared it on Facebook.

“It’s hard to see words like that,” she said.

Hard, she said, because it felt personal. Her parent fled Mexico for the U.S. in the 80s, fearing the drug cartels.

Credit: KING5
Ana Carrera discusses her feelings on the Build that Wall cookie.

“We were born here, but my parents were the stories you see on the news of people crossing the border because they just want a new start,” Carrera said.

It’s why she finds it to be such an offensive phrase.

“You say something with enough hate – you chant it, you have white supremacists, the alt-right chanting it – it’s going to become racial,” she said.

Bellingham apologized for offending anyone – telling multiple critics on Facebook it was a “mistake.”

He told KING 5 he meant it to be a joke – not a political statement on behalf of the bakery.

“It’s not anything I endorse,” he said. “I don’t think building a wall will solve our problems.”

“A cookie like this does represent that there is some hate coming out of this bakery,” she said. “Whether he chooses to admit it or not.”

Carrera said she doesn’t want Bellingham harassed, but she has no plans of returning to the bakery. The cookie has since sold.

"It really hurt because it touched home," she said.

Bellingham said his bakery has received several phone calls from frustrated customers, and Friday, he arrived to find a sign calling for a boycott taped to his front door.

“If I wanted to make a political statement, I’d put it on a sign,” he said. “And march up and down the street. But I put it on a cookie for heaven’s sake.”