A review is now underway at the Department of Licensing after it was revealed inaccurate MSRP figures may have been used to calculate car-tab taxes for potentially thousands of drivers. 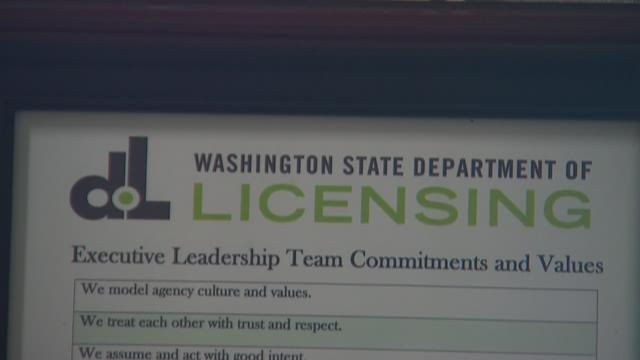 A review is now underway at the Department of Licensing after inaccurate MSRP figures were used to calculate car-tab taxes for potentially thousands of drivers.

The mistake means some taxpayers are being charged the wrong amount for their car-tab renewals.

"That's the part that I care about the most as a taxpayer. I want to pay an accurate value. I don't want to be overcharged," said Keith Brick, a taxpayer who lives within the Sound Transit District in King County.

It's no secret the controversy over increased taxes put in place after the passage of Sound Transit 3 has drivers looking at their car-tab fees more closely than ever before.

Brick was doing just that when he discovered a significant error, and contacted the Department of Licensing to report it.

"It turns out the MSRP they were using for my car was almost 50 percent higher than it should be," he said.

Brick owns a 2011 Mazda CX-7, and like many other drivers in King, Pierce, and Snohomish Counties, he's frustrated that Sound Transit and the Department of Licensing use the Manufacturer's Suggested Retail Price, or MSRP to calculate car-tab taxes.

Even several state lawmakers have called it an unfair formula because MSRP does not at all reflect a car's fair market value.

And if the Department of Licensing has the wrong MSRP figure on file for your vehicle, Brick feels it's even more unfair.

When you plug that inaccurate MSRP into the formula the Department of Licensing uses to determine your car-tab fees, the result is a tax bill of $214. That's $76 more than the $138 Regional Transit Authority tax that Brick is supposed to be paying.

A spokesperson for the Department of Licensing confirms the error, and says Brick was indeed overcharged by $76. DOL also says it's not an isolated error.

The Department of Licensing has received hundreds of phone calls from concerned vehicle owners and taxpayers.

"We have found cases where we can't explain why the number is different than perhaps it should be," said DOL spokesperson Brad Benfield. 'We're looking at obviously doing refunds for folks who have significantly overpaid."

Benfield says DOL is now conducting a review, to determine exactly how many taxpayers may have been over-taxed, or in some cases, under-taxed.

He says it's likely human error within the Department of Licensing that is to blame for the mistake.

"We are going back and taking a look, in cases where somebody made the wrong choice, to make sure we can go back and correct that," Benfield said. "But this is not a database error per se. It's not a problem our system is creating. This is just somebody who may have made a wrong choice out of a menu of choices."

It's still unclear how widespread the issue may be.

He points out that's a small number of impacted cars, when you consider there are 7.8 million registered vehicles in the state.

But Brick feels the owners of the "several thousand vehicles" that are impacted deserve to know what's been happening.

"It's the responsibility of the Department of Licensing to use an accurate MSRP to calculate my tax," said Brick. "If they're not using accurate MSRPs because their old system had a bad work flow, or human error, mistake in entry, whatever the case may be, they need to fix it."

Benfield said DOL is in the process of setting up a special hotline and section on its website designed to specifically answer questions related to inaccurate MSRP figures. He hopes those resources will be up and running by next week.

In the meantime, what can drivers and taxpayers do to find out whether the Department of Licensing has an inaccurate MSRP listed for your car?

Do exactly what Keith Brick did: research your vehicle's MSRP. Be pro-active about it. Don't wait for DOL to contact you and admit they made a mistake.

In most cases, you should be able to easily find your vehicle's MSRP online. You can also call the dealership where you bought your car and ask for your MSRP.

Then, contact DOL and find out what MSRP they're using for your vehicle. You can also find DOL's figure for your MSRP on your vehicle's registration certificate. The MSRP is identified on that form as the 'Value Code.'

"If you think it's wrong, you should give us a call," said Benfield. "Folks who have concerns like that, we're going to be working with them on a case-by-case basis, to make sure we have the right MSRP for them.

If the DOL's number doesn't match with your own independent research, you've likely been paying for DOL's mistake.

DOL also admits the mistakes might not be isolated to this year.

"If somebody has had a car for five years, and we've had the wrong MSRP, it's wrong now, and it's been wrong for the last five years," said Benfield.

The issue of potentially inaccurate MSRPs is especially relevant right now since legislation has already been proposed in Olympia that would require Sound Transit and the Department of Licensing to stop using MSRP to calculate a vehicle's taxable value.