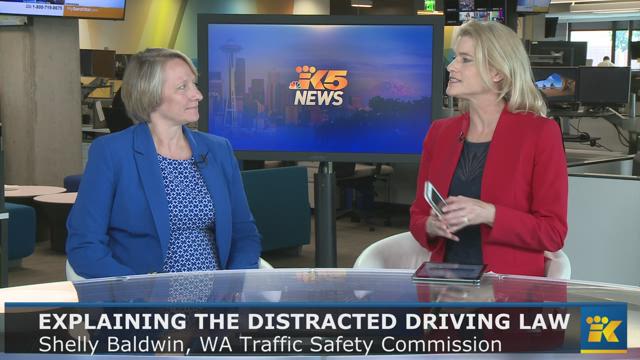 Yes, Washington drivers, you CAN sip your coffee or eat a snack while you're driving.

Contrary to what you might think, Washington State's Driving While Under the Influence of Electronics Act only forbids holding cell phones and other electronics. It does not ban eating, drinking, combing your hair or having a pet in your car:

"There is no list," says Shelly Baldwin with the Washington Traffic Safety Commission.

She says many people are confused about the part of the law that makes "driving dangerously distracted" a secondary offense.

As always, an officer can pull you over for a traffic offense such as speeding, making a dangerous lane change or failing to stop at a light. Under the law now, that officer may also write you a $99 ticket if he or she thinks you committed that traffic offense because you were distracted.

"When we talk about what distracts a driver, it can be anything that's not driving," says Baldwin.

For instance, "If your dog is jumping up and down on your lap, hitting your arms and making you swerve, they (officers) can pull you over for swerving."

If the officer believes the dog distracted you, he or she can write you that extra, $99 ticket. If the officer decides the dog had nothing to do with it, you won't face that second fine.

As with other tickets, you can challenge it in court.

Even so, concern over the days-old law has sparked a petition to rewrite the law.

"People who are signing that petition who now believe that it's illegal to eat or drive in their car, I just want to tell them, that's not what the law says," Baldwin insists. "They're petitioning against a law that really doesn't exist."

Given the confusion, why not just remove the secondary "driving dangerously distracted," offense?

Baldwin says lawmakers, law enforcement officers and people whose lives have been affected by distracted drivers want everyone to understand that it is a real problem.

"We had a huge - more than a 30 percent - increase in distracted driving fatalities in the state just between 2014 and 2015," says Baldwin, adding that last year, that rate did not decline.