Officers were seen installing several surveillance cameras Monday morning, and a temporary fence will be installed around the Capitol this week. 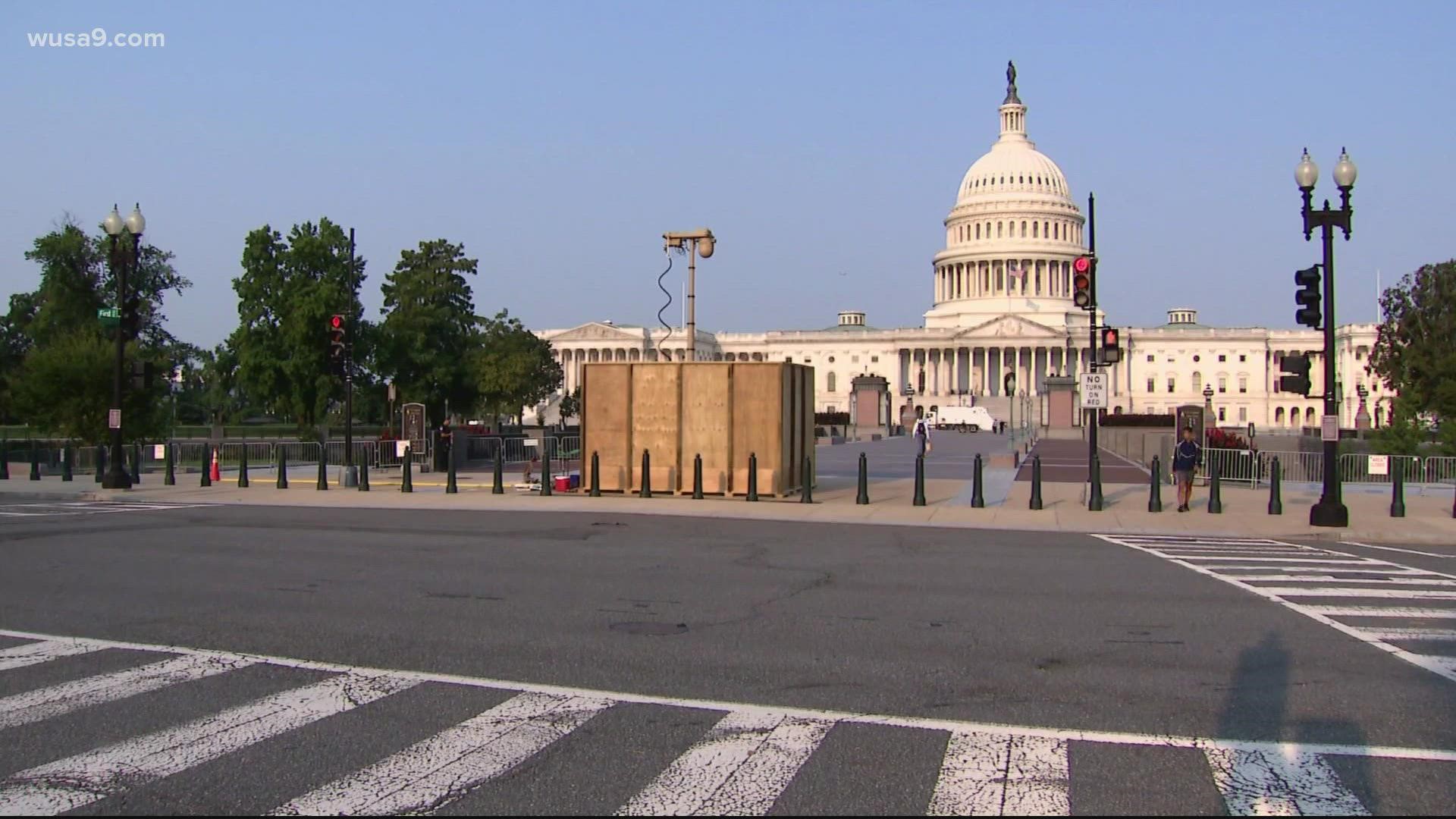 WASHINGTON — The U.S. Capitol Police and DC Police have taken several steps to prepare their departments, and the city as a whole, in advance of a rally planned at the Capitol on Saturday in support of Jan. 6 defendants.

"The United States Capitol Police is aware of concerning online chatter about a demonstration planned for September 18," a spokesman said in a news release late Monday.

USCP officers were seen installing surveillance cameras around the area of the U.S. Capitol Monday morning. Some areas near the Capitol have already been boarded up and several robotic cameras were placed at different locations.

The rally, known as “Justice for J6,” is planned for the Union Square area of the Capitol grounds, the section of the west front encompassing the Ulysses S. Grant Memorial and Capitol reflecting pool.

“We are here to protect everyone’s First Amendment right to peacefully protest,” USCP Chief Tom Manger said in a statement. “I urge anyone who is thinking about causing trouble to stay home. We will enforce the law and not tolerate violence.”

Manger said a fence will go up around the Capitol again a few days before the rally, and come down soon after, if everything is peaceful.

House Minority Leader Kevin McCarthy (R-CA.) said he did not think any members of his party would be participating in Saturday's events.

In a video uploaded Thursday, the rally organizer urged protesters to remain peaceful.

"The number one request is to be respectful and kind to all law enforcement officers who may be present," said Matt Braynard, a former Trump campaign aide who is now with Look Ahead America.

See the full statement from U.S. Capitol Police below:

The United States Capitol Police is aware of concerning online chatter about a demonstration planned for September 18.

“We are here to protect everyone’s First Amendment right to peacefully protest,” said Chief Tom Manger. “I urge anyone who is thinking about causing trouble to stay home. We will enforce the law and not tolerate violence.”

Today the Capitol Police Board approved a plan to temporarily put up a fence around the Capitol Building. When the inner-perimeter fence was taken down in July, USCP leaders noted that from time to time, they may exercise the ability to enhance security around the Capitol Complex.

Last week the Capitol Police Board issued an emergency declaration, which will go into effect about the time of the demonstration and allow the Department to deputize outside law enforcement officers as United States Capitol Police Special Officers.

“We want to reassure everyone these are temporary measures to ensure everyone’s safety,” said Chief Manger. “We are extremely grateful for the support we continue to receive from the local community and our Congressional stakeholders as we carry out our critical mission.”

Throughout the last month, the USCP has held planning meetings for the demonstration and continues to share important intelligence information with officers, our law enforcement partners, and Congress.

The United States Capitol Police will continue to ensure that each individual’s right to free speech under the First Amendment of the U.S. Constitution is protected.

The Public Information Office will continue to share non-security sensitive information with the public.

US Capitol Police Chief Tom Manger says fence around Capitol will go up day or two before #justiceforJ6 rally and come back soon after, if everything goes peacefullly. @wusa9 https://t.co/wKrU4bQqxK