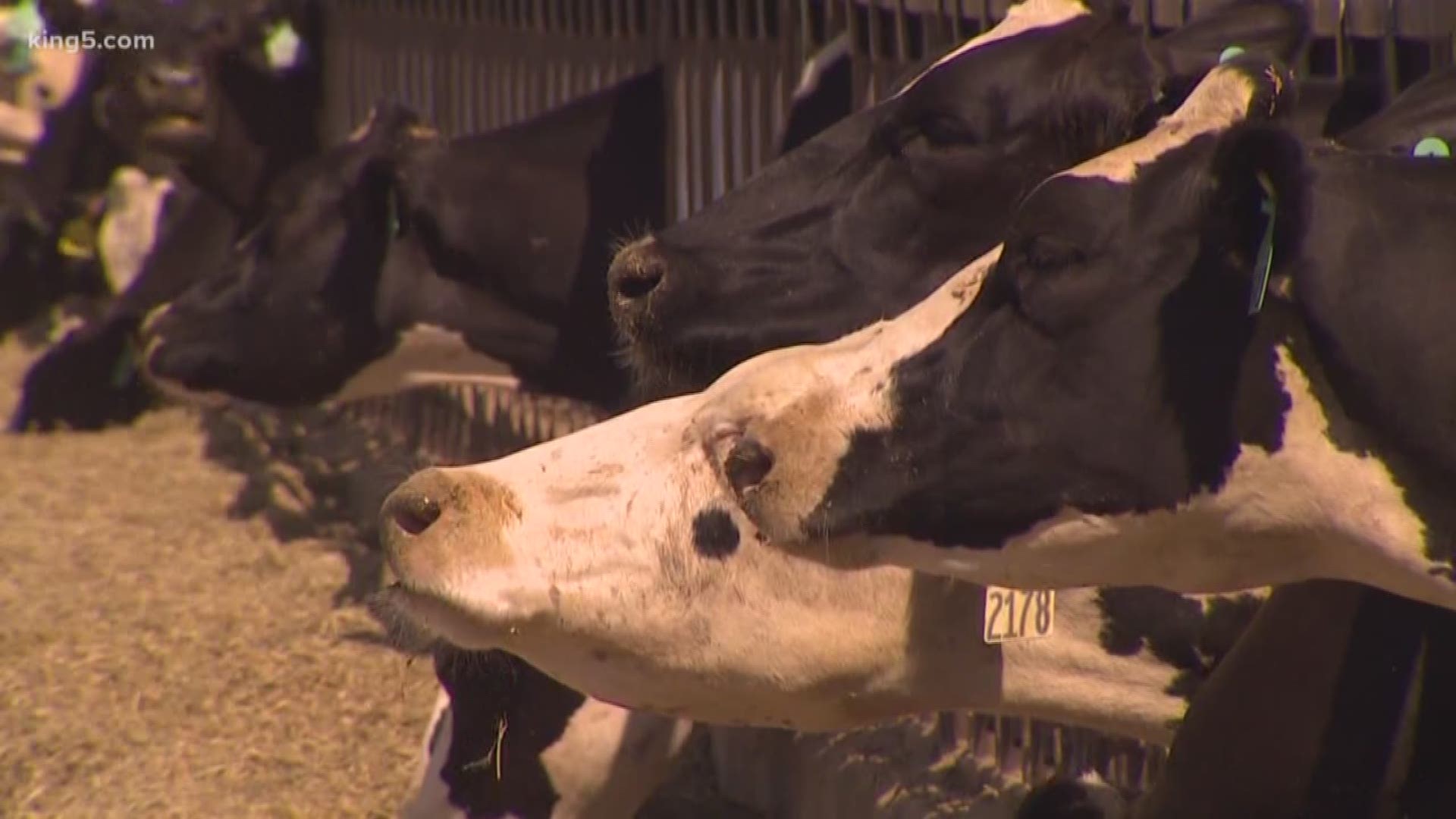 Dairy farmers say the state's new permit requirements are too tough while environmental groups say they're not tough enough. Both sides are appealing. Several days of testimony in front of the Pollution Control Hearing Board wrapped up with closing arguments on Thursday.

"After two years of work with our stakeholders and the public, we feel we adopted a fair and balanced permit that protects both people and the environment," said Ecology Water Quality Program Development Services Section Manager Vince McGowan.

A CAFO is defined as a farm that has over 200 animals confined for 45 days of the year or more. The permit is required for CAFOs in Washington that discharge manure, also called nutrients, to groundwater or surface water. The permit can also include other smaller facilities where Ecology determines there is significant pollution.

The state estimates there are about 230 CAFOs. Most of them are dairies. Currently, only 23 are under permit and nine are in process. It was effective March 3, 2017, and Ecology believes it's taken a while for CAFO operators to warm up to the new permit with all of the uncertainty surrounding it. Still, only 10 CAFOs had permits under the previous requirements. Under that permit, however, a CAFO that only discharged to groundwater was not required to have a discharge permit.

"People can't drink the water. People can't eat the shellfish because of dairy pollution. It's simple," said attorney Charlie Tebbutt. "This board has the opportunity to right these wrongs that have been going on for decades because of Ecology's willful ignorance. Ecology fiddles while Washington burns from dairy contamination."

Tebbutt successfully sued a cluster of dairies in the Yakima Valley in 2015, when a judge ruled the lagoons were leaking and posing an imminent threat to human health.

It's the reason resident Jean Mendoza continues to fight.

"It was very hard for me to sit through these hearings because we had a room of pretty much middle-class people making decisions for the people who live in the Yakima Valley who are primarily the working poor and very often people of color. So, people over here are making decisions for us and we have no input," said Mendoza.

Permits are required to be re-issued every five years. The last one expired in 2011. The permits determine how the manure is managed and how the environmental impacts are monitored. The permit has specific requirements for the level of nitrates in the soil to prevent it seeping into the groundwater. CAFO operators sample twice a year, in spring and fall, then report back to Ecology. They sample the manure in the lagoons for its nitrogen content but not groundwater below.

The standards of lagoons are a major point of disagreement. The permit requires the lagoons to be built according to Natural Resource Conservation Service standards, which is also in the 2006 standards, along with a lagoon assessment for existing facilities. Currently, lagoons are lined with compacted soil designed to prevent the lagoon from leaking. There is known seepage from lagoons, but it must be less than a rate of 10 to the minus 6 centimeters per second. NRCS is a federal agency that publishes standards, but they're only recommendations, not requirements. Environmental groups want lagoons to be lined with synthetic material. They're also asking for groundwater well monitoring.

Dairy insiders believe it could put a lot of farms out of business. They're critical of the new permit because it is much more stringent than federal guidelines, which they believe are strict enough to protect environmental and human health.

"Things are tough in the dairy industry. We've lost 85% of our dairies in the last 25 years in this state. Milk prices are down. We're talking about this permit adding several hundred thousand dollars in expense to change the structure of the lagoon that may already be meeting the federal standards," said Washington State Dairy Federation Executive Director Dan Wood. "It could make a fully-functioning, fully-compliant lagoon non-compliant in the eyes of the state even though the federal agency says it's fine."

Another point of contention is the distance required between the lagoon's base and the high groundwater level. Ecology is requiring that the bottom of the lagoon lining be two-feet from the seasonal high groundwater level. In order to protect the groundwater, studies have shown that two feet of distance is important, Ecology says. In Whatcom County for instance, where many of the dairies are located, groundwater is high. Given the challenge of updating infrastructure, the permit gives CAFOs two years to come up with a lagoon assessment after receiving a discharge permit, then six months to come up with a plan of action, after which they get another 18 months to implement the plan.

"The main toxicity of nitrates is they affect the blood's ability to carry oxygen to all the tissues: to your brain, to your lungs and to your heart. Infants, babies, and pregnant women are particularly at risk from this toxicity," Dr. Karr said. "Other research suggests that pregnant women who are exposed to higher levels of nitrate may have a higher risk of pregnancy complications like anemia, preeclampsia (which is a condition of high blood pressure in pregnancy) as well as more likely to develop babies who have low growth, more likely to have a spontaneous abortion or even may have a higher risk of birth defects. Based on this kind of research, using a precautionary approach to reduce high exposures in pregnant women is particularly important."

Over a dozen permit conditions were debated. Environmental groups also want more groundwater and surface water monitoring which the facilities would have to pay for. They believe it's the only real way for Ecology to enforce the rules. Currently, surface discharge reporting is required if seen. There is a soil monitoring requirement in the annual report CAFOs give Ecology as a part of their permit to inform their nutrient management plan. Environmentalists want groundwater wells to be drilled and monitored for the level of nitrates.

It could take 3-to-4 months for the three-member Pollution Control Hearing Board and hearing officer to return their ruling on the different items of contention, which can then be appealed.

"Despite great improvements in environmental performance, as farmers we continue to be attacked with false information, outdated data and bad science by activist groups and their out-of-state lawyer Charlie Tebbutt who has reaped huge profits from this kind of deceitful litigation for years. The evidence presented shows Tebbutt’s accusations are false, and show that the groups that support him are still committed to their anti-farm agenda in spite of the facts. The citizen lawsuit provision at the heart of the effort to alter the CAFO appeal has been shown to be a fundraising method for environmental groups involved in this hearing. Their damaging approach hurts the environment and communities by working to push more farming out of this state, opening the door for more urbanization and real environmental harm."