Debora Juarez feels like North Seattle needs a promise of another light rail station before voters approve it. 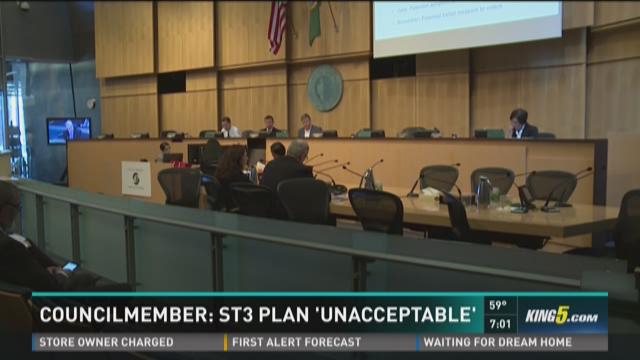 On Tuesday, a Seattle City Council member called a part of the plan to extend light rail "unacceptable."

Debora Juarez, who represents North Seattle's District 5, says the $50 billion plan that would take 25 years to complete fails to make a solid promise to build a station in a pivotal part of the city.

She was vocal about her disappointment during a transportation meeting between city and county legislators that a "provisional label" is attached to the 130th Street station on the the Sound Transit 3 plan.

"The North End was annexed 61 years ago and the North End used to be its own city. That's why we are the only district shore-to-shore, 13 square miles, with a hospital, a college, Northgate Mall and now Thornton Creek," she said. "With most transit – you have a stop basically every quarter mile. We have a three mile stretch in there and it isn't three miles of nothing."

She told council members and Sound Transit officials present at the meeting that the 90,000 residents in those 13 square miles need more of a promise than one stop at Northgate.

#ST3 represents an ambitious vision. It is the most important decision our generation will be asked to make: https://t.co/cnMFt12JN8 #KCSOTC

"The problem I have with the word 'provisional' and labeling it provisional means, basically, if there's money left over you're going to get this," she told KING 5. "Even if there is money leftover and you do get a stop we don't know if it's 20 years from now or 30 years from now. I'll be dead in 30 years but I'll be basically paying taxes for the next 30 years. I just have a problem with that."

Councilmember Rob Johnson, who's also on the Sound Transit Board, said the agency has already submitted plans for the Lynnwood Link Extension to the Federal Government.

"When you submit those plans it sort of locks everything in cement. If you're going to go back and change the plans again the federal government allows you to do that but it puts you in the back of the funding line," Johnson said. "So if we were to go in and add the 130th station as part of that we jeopardize potentially $1 to $1.2 billion worth of federal funding that could come for the Lynnwood link extension project."

Comments received during the public comment period, which runs through April 29, will help the Sound Transit Board adopt a final plan in the June timeframe. Voters will either approve or vote down that final version on November 8. Sound Transit starts a series of seven public meetings on April 19:

Except for the daytime meeting in Seattle on April 28, all of the meetings will run from 5:30 to 7:30 p.m., with presentations at 6 p.m. Meetings in Ballard, West Seattle, Redmond and Federal Way will coincide with King County Metro Transit Long-Range Plan public meetings.

Here's a link to the full interactive map from Sound Transit.