'It's a nuisance': Container ships anchored in Puget Sound causing headaches for neighbors

Full ports all along the West Coast are forcing ships to drop anchor in places they normally wouldn't, and it's upsetting some residents on nearby islands. 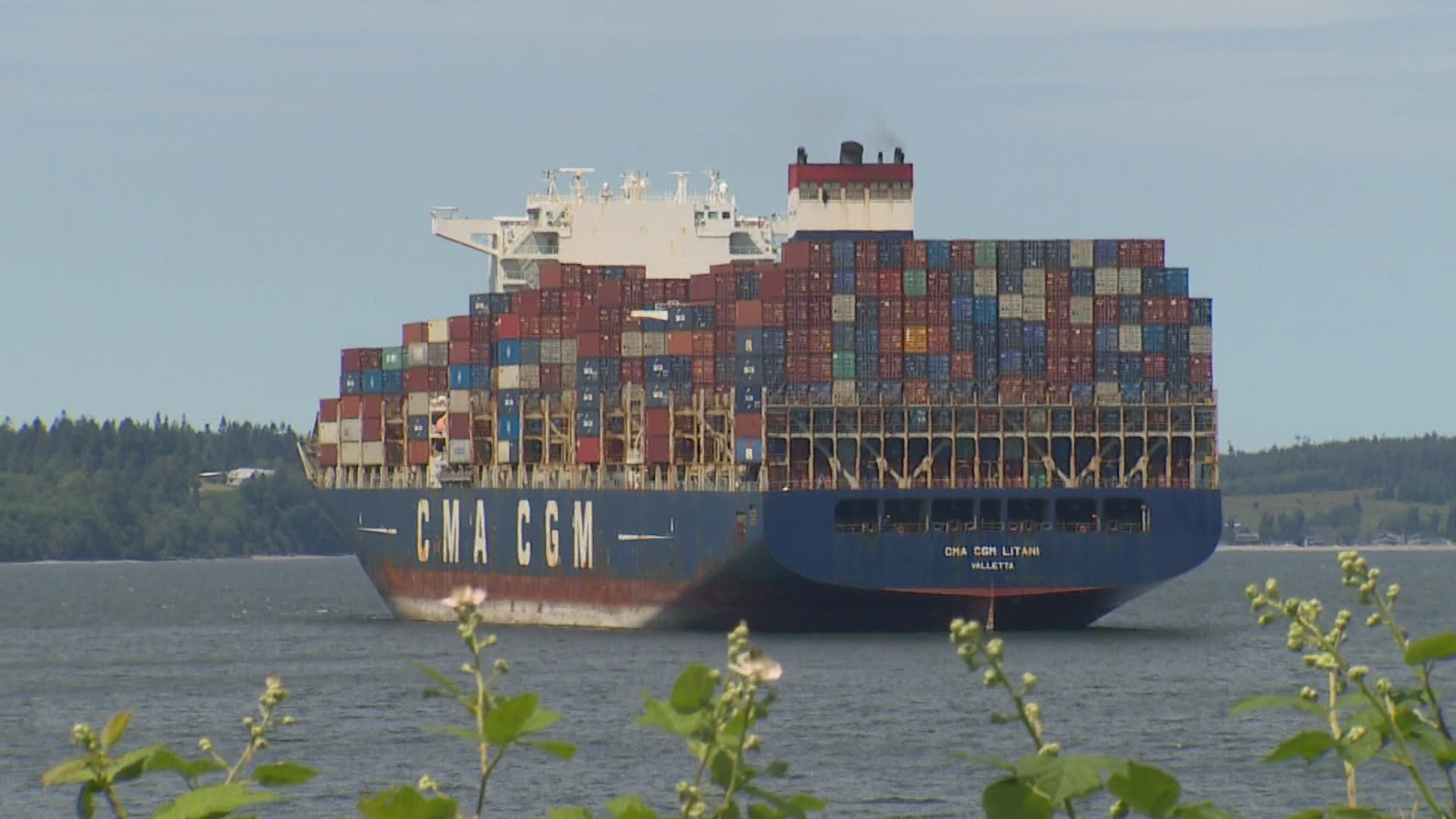 FREELAND, Wash. — The view from Robin Charlwood's Whidbey Island home is usually filled with water and wildlife. Now, the landscape is what some call a manmade monstrosity.

"We see these ships and we've never seen them this close before," said Charlwood. Three huge container ships -- up to four football fields long each -- are anchored aimlessly off the coast of Charlwood's Whidbey Island property.

"We're getting the noise, the throbbing noise at night. Some of the people further up, if the wind is right, they hear it at night. There are fumes, too," said Charlwood. "I understand the issue, but it's a nuisance."

Three boats are anchored in Holmes Harbor, nestled between Whidbey and Camano Islands. Approximately five more are sitting at Yukon Harbor near Blake Island. They're among about 15 ships currently anchored in Puget Sound because of a massive backlog of container ships up and down the West Coast.

Ports from L.A. to B.C. are at capacity due to a supply chain surge that's sending goods from Asia flooding into America, as coronavirus loosens its grip on our economies.

Unspecified railway issues in the Midwest are partially to blame for full ports in Seattle and Tacoma. Longshoremen have nowhere to load the containers once they come in.

"Without the railroad cars there's no place for containers to be offloaded from terminals here in Seattle and Tacoma," said Laird Hail, director of Puget Sound vessel traffic for the U.S. Coast Guard. "The terminals are full with containers and they don't have any room for containers coming off the ships. Until the ships can offload their containers they can't depart so ships inbound from sea have no berth to go to."

Neighbors in the islands are raising concerns about lights and noise from the ships for both people and marine life. Coast Guard officials say they're doing their best to make sure the ships are good neighbors.

"If we get reports from residents we will go out to the agent or to the ship and ask them to comply," said Hail, adding, "we have no legal authority to enforce anything."

When asked if people should be concerned about potentially hazardous cargo on the ships, Hail answered, "Not at all. Hazardous materials is a very broad category and a lot of it is nothing to be worried about."

In addition to the 15 ships now anchored in the Sound, even more are expected over the next next several days.

How long they'll stay is up to the supply chain.

"We can't really predict when they'll leave," said Hail. "Your guess is as good as ours."